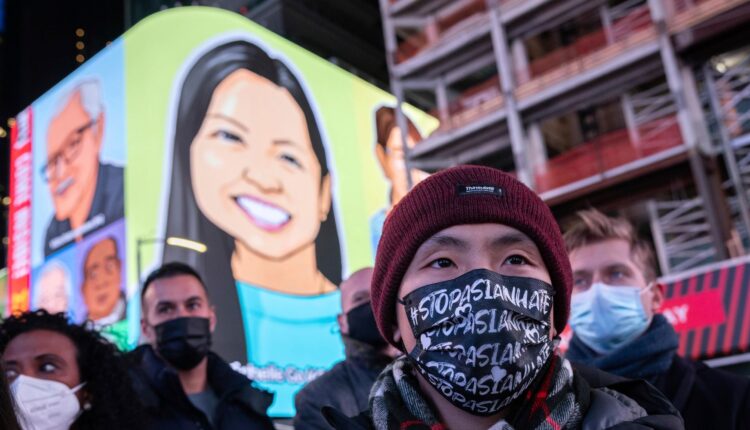 Activists and officials are commemorating the one-year anniversary of a shooting rampage at three Atlanta-area spas, where a man killed eight people — including six women of Asian descent.

But as people reflect on the somber tragedy, Asian Americans and Pacific Islanders (AAPI) are still grappling with the fact that anti-Asian hate incidents have only increased.

The rallies, created by the Asian Justice Movement, are meant to remember the victims of the massacre and “break the silence” on anti-Asian hate that continues to wreak havoc on the community, especially for women of Asian descent.

“On this incredibly painful anniversary, we acknowledge the lives lost in the Atlanta spa shootings and the family members, friends and communities impacted by that event,” said Quyen Dinh, executive director of Southeast Asia Resource Action Center.

“Today, one year later, Southeast Asian Americans continue to navigate the fear and violence of rising anti-Asian hate, including recent murders in New York City and Albuquerque and a brutal attack on an elder in Yonkers,” Dinh continued. “We demand investment into community-based and community-led solutions. We keep us safe, and it is well past time that our federal, state and local governments fully supported AAPI health, safety and healing.”

While the shootings in Atlanta happened one year ago, attacks on Asian Americans — especially women — have continued across the nation, increasing fear and concerns for safety among the community. With the FBI reporting a spike in such attacks since the beginning of the pandemic, an event that has fueled xenophobia and anti-Asian racism, the reporting forum Stop AAPI Hate has tracked nearly 11,000 hate incidents against AAPI between March 19, 2020, to Dec. 31, 2021.

Of the hate incidents in the group’s national report, nearly 58% of them occurred last year. Almost half of all incidents took place in public spaces, and almost two-thirds of the total incidents were reported by women. The real numbers are likely much higher, due to Stop AAPI’s data being self-reported.

The National Asian Pacific American Women’s Forum published a survey earlier this month that showed 74% of AAPI women reported experiencing racism and/or discrimination over the last year. Over half said the perpetrator was a stranger, or someone they didn’t know. Almost 40% reported experiencing sexual harassment. A majority of East Asian respondents reported feeling less safe now than at the beginning of the pandemic.

“The results of this survey are striking and far reaching,” said Kyung B. Yoon, president of the Korean American Community Foundation. “The climate of fear and anxiety created by persistent discrimination, harassment and violence is more than an issue of safety for AAPI women — it endangers their mental health, wellbeing and happiness.”

The anti-Asian hate incidents did not end in 2021. Earlier this year, New York City faced two high-profile incidents of attacks on Asian American women. Christina Yuna Lee was found stabbed to death in her apartment last month. In January, a man killed Michelle Alyssa Go by pushing her in front of an oncoming subway train.

Two separate shootings at two Asian-owned spas occurred within a month of each other in Albuquerque, New Mexico — leaving two people of Asian descent dead. Just last week, a man in Yonkers, New York, followed an elderly Asian American woman into her apartment building after reportedly calling her an “Asian bitch” and brutally beat her, stomped on her and spit on her.

“These highly visible tragedies also call our attention to the everyday experiences that the most vulnerable members of our communities face in the cross-hairs of white supremacy, misogyny, and imperialism,” Asian Americans Advancing Justice said in a statement. “The racial and sexual exploitations wrought by the presence of U.S. militarism in Asia and the Pacific; the resulting geopolitical upheavals that force migration; the daily terrors of a system that criminalizes immigrants, massage workers and sex workers; housing and financial security; and the ongoing abuses and dangerous conditions that migrant, low-wage, service workers face daily.”

Many of the high-profile incidents of anti-Asian hate have led officials and some community members to respond with calls for more policing. President Joe Biden signed the COVID-19 Hate Crimes Act into law last year, expediting the Justice Department’s review of COVID-19-related hate crimes and directing law enforcement to improve how people can report incidents.

But AAPI advocacy organizations, like AAAJ, have spoken against the decision to increase policing as a solution to the rise in hate incidents — stressing that adding more police would not necessarily help prevent the attacks, and that increased law enforcement would disproportionately impact other marginalized communities and hurt the Black and Asian American solidarity that grassroots activists have been building.

“Together, we commit to push beyond the oppressive boundaries of white supremacy and anti-Blackness and build sustaining communities of care. We can address the needs of victims of racialized and gender-based violence while also holding our elected leaders accountable for creating policies that center our communities,” AAAJ said.

“This includes investing in community-based organizations that are often on the frontlines of caring for victims, survivors and vulnerable communities in the languages they use and with sensitivity to their cultures, livelihoods and immigration statuses,” the group continued. “Our elected leaders must provide long-standing investments and resources for the families of victims and survivors well after the immediate crisis has abated, access to victims’ compensation funds, fully fund violence prevention and restorative justice programs, and public infrastructure and institutions focused on public health and education.”

Forbes India – Could AI Help Us Discover The Next ‘Despacito’?

How to Greet in French: 5 Common Greeting Words

Which party is benefiting in Manipur as compared…

What is HDhub4u Nit?

Confession of the terrorist who killed the CRPF…