Forbes India – A Waiter. A Cab Driver. An Engineer: The US Fighters Bound For Ukraine 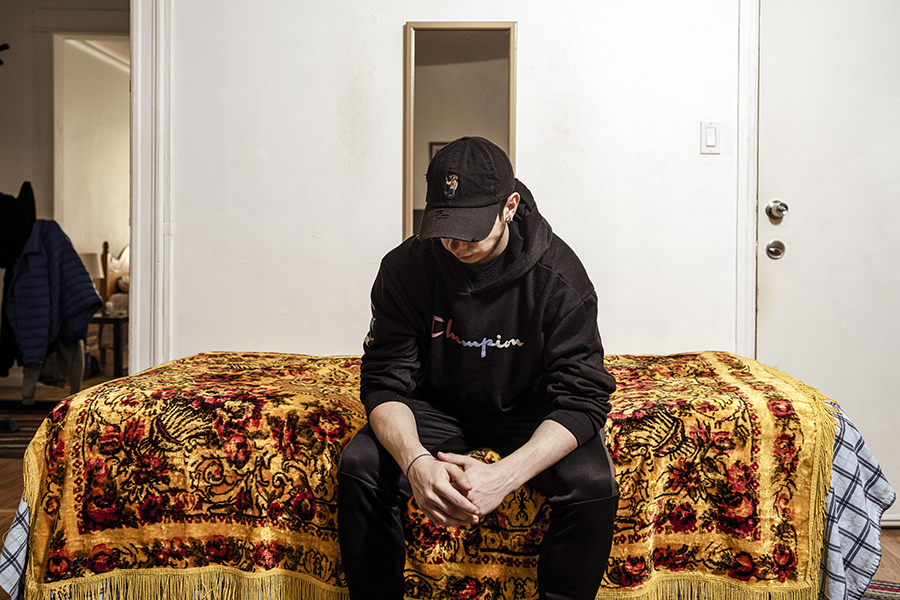 Ivan Danyliuk, a waiter at Veselka, the popular Ukrainian restaurant in Manhattan, at his home in Queens on Tuesday, March 8, 2022. Danyliuk is among a growing number of Ukrainians in New York and across the country, many of whom have never fired a weapon, who are heeding Ukrainian President Volodymyr Zelensky’s call to join the front line against Russia. (Sasha Maslov/The New York Times)

NEW YORK — Last week, Yuriy Blazhkevych, a taxi driver who lives in Brighton Beach, Brooklyn, stood in his garage, scrolling through images of Ukraine on his phone that showed buildings with blasted-out windows, tanks rolling over cars and people fleeing for their lives.

Then there were the photos of dead children.

“I was crying,” he said in his home less than 24 hours before boarding a flight to Warsaw, Poland. “Every five minutes, there was something new. Then I told myself, ‘Either I watch the war on Facebook and write in comments and cry, or I go and help.’”

Blazhkevych, 63, moved to New York City from the city of Lviv in western Ukraine shortly after the collapse of the Soviet Union in 1991. He started wear ing bluejeans — long banned where he had come from — and listening to bona fide Pink Floyd albums, not the bootleg ones. Thirty-odd years later, he has three children, including an 11-year-old, plus a wife and a former spouse with whom he remains close. Life has been good to him.

And yet, he is among a growing number of Ukrainians in New York and across the country, many of whom have never fired a weapon, who are heeding President Volodymyr Zelenskyy’s call to join the front line against Russia.

There is Ana Bogdanova, 37, a data scientist who is trading in the coffee shops and boutiques of Manhattan’s East Village for weapons training in her hometown, Ternopil. There is Ivan Danyliuk, 18, from Ridgewood, Queens, who is a waiter at Veselka, the popular Ukrainian restaurant in the East Village, which has become a hub for New Yorkers to show solidarity. And there is Yuriy Nikolaevich, 55, a forest engineer who has lived in Somerset, New Jersey, for 20 years.

Among those who have already left are Bogdan Globa, 33, a gay rights activist who lives on Manhattan’s Upper East Side and is helping with humanitarian aid along the Polish border, and Andrey Liscovich, 37, a Harvard-educated tech entrepreneur who left his Silicon Valley job to fight in Zaporizhzhia, the site of Europe’s largest nuclear plant, which was recently taken over by Russian forces. 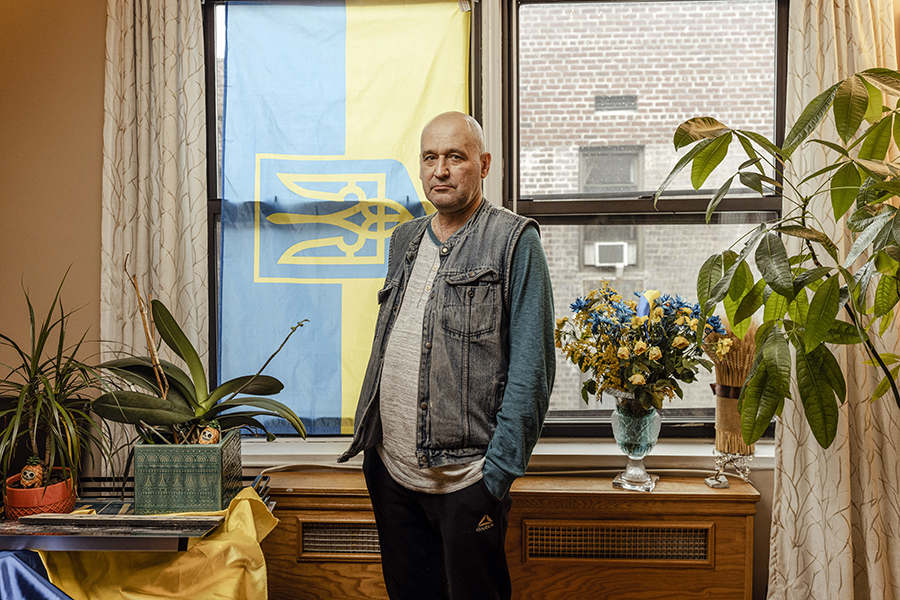 Yuriy Blazhkevych, a taxi driver, at his home in the Brighton Beach section of Brooklyn on Monday, March 7, 2022, one day before leaving for Ukraine. He is among a growing number of Ukrainians in New York and across the country, many of whom have never fired a weapon, who are heeding Ukrainian President Volodymyr Zelenskyy’s call to join the front line against Russia. (Sasha Maslov/The New York Times)

“I’m super scared, but it doesn’t change anything,” said Bogdanova, who requested to replace her surname with the equivalent of a middle name for this article, because her parents, who are in Ukraine, are not aware of her decision.

“Let me put it this way: When I see ants in my kitchen, I collect them, I put them outside,” Bogdanova said. “I can’t stand to hurt another being that’s alive. But in this case, they’re destroying, bombing every single day. I’ll do what I’m supposed to do. I will take up arms — I will not hesitate.”

Neither, it seems, will Blazhkevych, who recently started driving his car, which he painted with obscenities referring to the Russian president, Vladimir Putin, slowly around Brighton Beach, home to many Russians.

Zoryana Blazhkevych and Yan Bocharov, his daughter and son-in-law, know that he is stubborn. It both explains his decision, they said, and makes them even more concerned for his welfare in a war zone. 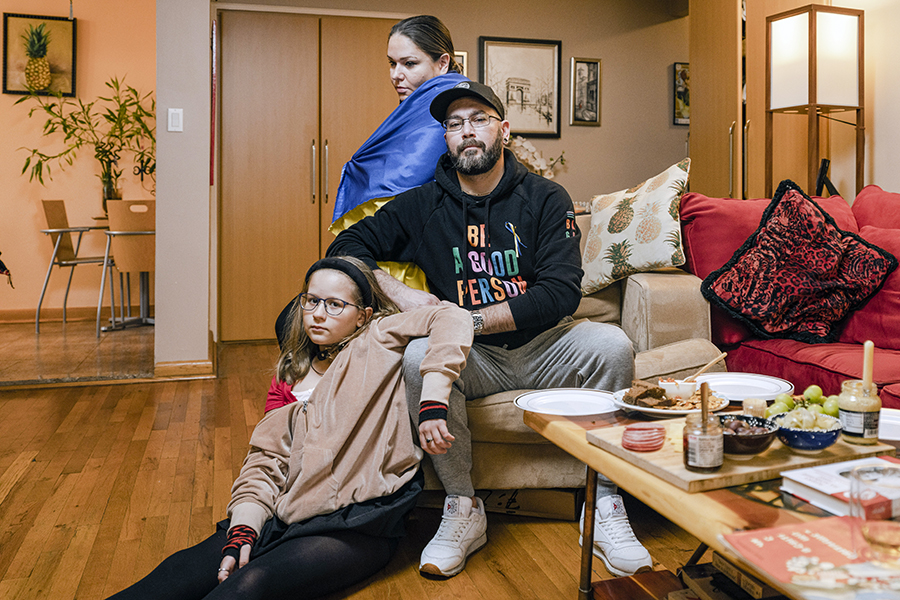 Yuriy Blazhkevych’s two daughters, Oksana, 11, and Zoryana, with Zoryana’s husband, Yan Bocharov, at their father’s home in the Brighton Beach section of Brooklyn on Monday, March 7, 2022. Blazhkevych is among a growing number of Ukrainians in New York and across the country, many of whom have never fired a weapon, who are heeding Ukrainian President Volodymyr Zelenskyy’s call to join the front line against Russia. (Sasha Maslov/The New York Times)

“He never wears socks. Even when it’s snowing, he wears flip-flops,” said Zoryana, half resigned, as she sat with her father and his youngest daughter, Oksana, 11, in his living room the day before he was to leave for Poland. Her husband added, “The man hates socks — what is he going to do when he needs to wear boots?”

They both chuckled for a moment, then covered their eyes and wept quietly. Oksana remained silent.

“Oksanka,” Yuriy Blazhkevych said gently to the girl, using a term of endearment.

She pushed herself further into the back of the sofa. He sighed, got up and padded around the living room with bare feet.

Yuriy Nikolaevich, the forest engineer, is a rarity among those interviewed: He has military training. As a young man in the Soviet Union, he learned how to operate anti-submarine missiles in St. Petersburg, Russia.

“I can handle Kalashnikovs, automatics — I just need a couple of days” to familiarize himself with the weapons again, he said.

He leaves this week for Ivano-Frankivsk, the city in western Ukraine where he grew up, and then intends to join the front line in Kyiv or somewhere else under heavy attack farther east.

Ukraine’s consulate in New York City has advised volunteers on what to pack, he said.

“They ask us to bring very little of personal belongings, just a bag per person, and provided us with a list of military equipment and gear,” Nikolaevich said.

Because supplies are running short, he is also taking more than a dozen bags filled with medications, as well as items like thermal socks for other soldiers.

Liscovich, the tech entrepreneur, left San Francisco several days ago for Zaporizhzhia, his hometown, carrying two changes of clothes, a solar panel to charge his phones and laptop, a water filtration system, a first aid kit, $4,000 in cash and credit cards for supplies. He flew into Poland, then took two trains to Ukraine. From there, he got a lift from some firefighters, and then another from strangers.

“I’ve never held a gun, besides maybe a water pistol,” said Liscovich, whom fellow soldiers have nicknamed “the American.”

Because of his background in tech, he was assigned as head of logistics and procurement for the local military unit. He has already spent $20,000 on supplies, using donations sent to him on Venmo.

He is staying at a hotel across from the city’s main administrative building, similar to what the Russians bombed in Kharkiv, and he is worried that he is exposed.

“For now, I can see the Ukrainian flag from my window, but that is the first thing they’ll take down if they take over,” he said.

Air raids during the night have deprived him of sleep, leaving him mentally and physically exhausted. Every night he runs down eight floors and takes shelter in his hotel’s basement, an old bunker built by the Soviets in the 1970s that now provides protection for Ukrainians.

“It’s exactly like what you see in that HBO series ‘Chernobyl,’” he said. “At night there are no lights. It’s dark and ghostly; it’s very eerie. I’ve never seen my hometown like this.”

An avid piano player, Liscovich says one of his favorite pieces of music is Beethoven’s Seventh Symphony. It is now included in a will that he recently wrote on his laptop on the flight to Europe.

There was a heated argument in the Rajya Sabha over the prices of petrol and diesel, Hardeep Puri gave this answer