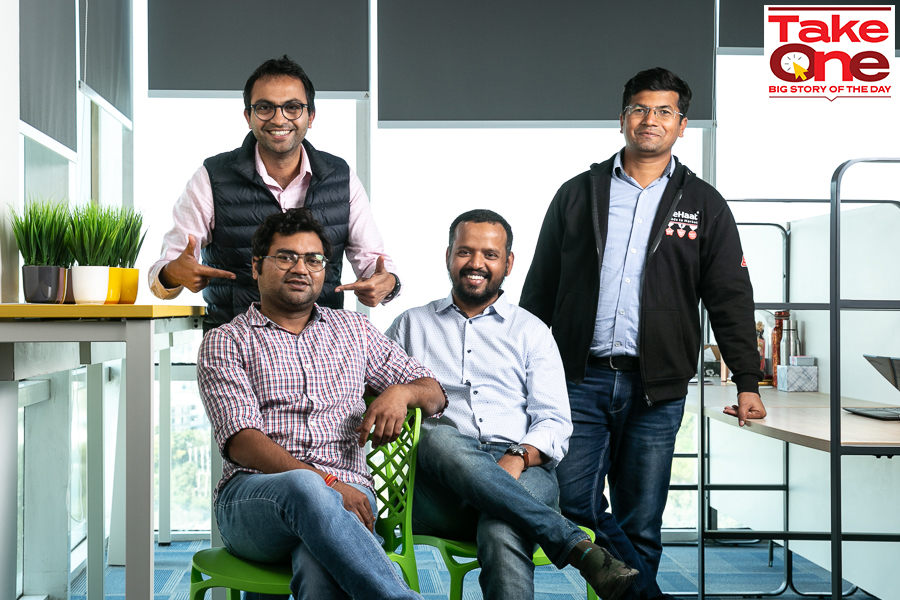 
“Tumse shaadi kaun karega (who will marry you),” was a grave question posed by a concerned father in 2011. Coming from a rural farming background in Bihar, Shashank Kumar’s father knew very well what his lad needed. First was high-quality education: IIT-Delhi alum Kumar scored high on that front. Second was a non-farming life, which also meant staying away from the state. Kumar performed brilliantly on this count too. After IIT, he joined a consulting firm and spent close to three years. His parents, understandably, were elated.

There was something missing, though. The only thing left in Kumar’s life, his parents reasoned, was to settle down and lead a happy life. Kumar, however, turned out to be an utter disappointment. He came back to Bihar, and decided to pursue a career in farming. “It was difficult for them to digest,” recalls Kumar, who went on to co-found DeHaat with Amrendra Singh, Shyam Sundar and Adarsh Srivastav in 2012.

A few days into his stint as entrepreneur, Kumar discovered what farmers found hard to digest. The first unpalatable ingredient to stomach was Kumar’s background. Many didn’t know IIT. “Kya hai ye (what is this). And a few who knew, were startled. “Yahan se 100 gaon dur bhi koi nahin hai (there is not one even in the radius of 100 villages). And then there were some who were aghast at the audacity of a bunch of 24-25 year olds. “Kabhi kheti ki hai? Tum bataogey kya ugana hai aur kua nahin (have you ever done farming? Now you would teach us what to grow and what to skip)?” 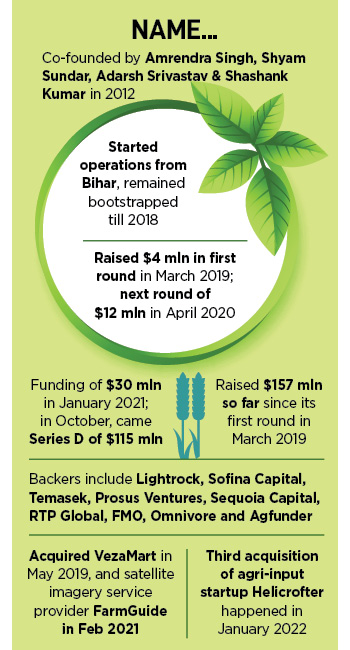 Kumar was equally baffled. He knew there was a lot of inefficiency entrenched into every stage of the farming cycle. He had data to back his conviction. Around 80 percent of net sown area in the state was under conventional crops like wheat and paddy, which didn’t work in terms of overall unit economics for a farmer. “Why can’t they grow more remunerative crops,” he wondered. He thought the solution lied in switching to high-value crops with short crop cycle.

The farmers, though, displayed inertia. And rightly so. For decades, they had grown wheat and paddy, and still struggled to make ends meet. There was no reason to trust a bunch of city youngsters and their idea of high-value crops. “We were trying to sell Dark Fantasy biscuit to Parle G consumers,” recalls Kumar.

After the initial years, the DeHaat team changed its strategy. The plan now was to win the trust of the farmers, and the first step in achieving that was to bring efficiency around the existing crops. Kumar knew he had to buy time, which meant spending months with the farmers, toiling hard with them and acting like their companion. During the process, came another startling discovery, and the ‘aha’ moment. The entire agricultural process was broken, and was looked upon as silos. “It’s not just input, output, or financing,” he says. Everything, he underlines, was related. What this meant was that agriculture needed a full-stack and holistic solution to make a positive impact on the lives of the farmers.

Staying bootstrapped with just two meagre angel rounds till 2018, DeHaat managed to fine-tune its business model. Staying frugal for the first seven years came with its plusses. “Our focussed goal was to build the model and scale operations,” says Kumar. Another positive side was leading a life without thinking of providing all kinds of exits to VCs, which usually happens if a VC comes early. Staying away from the cities where VCs were cutting big cheques to startups also helped. “We were fortunate not to get distracted,” he says, adding that by the end of March 2019, they had around 10,000 farmers on its platform and 40 DeHaat centres. 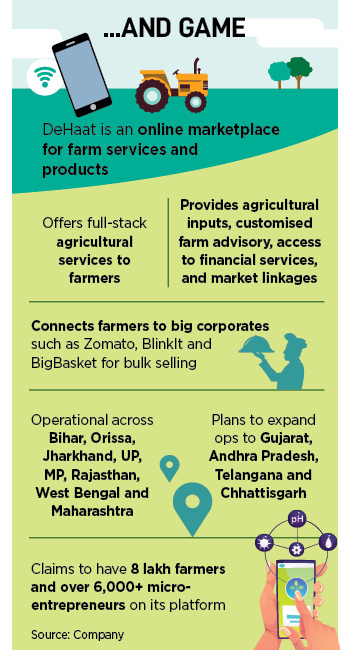 In March 2019, the agritech startup raised its first institutional round of $4 million. Since then, it has been on a funding drive. In April 2020, came the next round of $12 million. Series C of $30 million took place in January 2021. And after nine months came its biggest round of $115 million led by Belgium-based investment firm Sofina, and Lightrock India. While Temasek co-invested in the round, existing investors such as Prosus, RTP Global, Sequoia Capital India and FMO too participated.

Interestingly, the Series D round leapfrogged DeHaat’s valuation from $158 million to around $450 million reportedly, making it the most valued agritech player in the country. DeHaat’s progress—revenue and scale of operations—too has been heady. While operating revenue has jumped from Rs 42.46 crore in FY19 to Rs Rs 358.2 crore in FY21, the losses have not bulged enough to be alarming: From Rs 2.55 crore to Rs 54.1 crore during the same period. For FY22, the company is on track to post over six-fold growth over last fiscal. “We are driving monthly revenue between Rs 160 crore and Rs 200 crore,” claims Kumar.

The backers are delighted with the progress card. As one of the first institutional investors in DeHaat, Omnivore found two things impressive. First, the founders’ roots in rural India. And second, their deep knowledge about the challenges of Indian agriculture. Even nine years ago, the founding team understood that instead of solving for a specific part of the value chain, a 360-degree solution—what is now known as full-stack—is essential. DeHaat, underlines Jinesh Shah, managing partner at Omnivore, has crafted a unique ‘phygital’ strategy combined with a tech-led execution, which has helped create the largest first-mile network for farmers. “It is poised to transform Indian agriculture by improving yields, income and ease of doing business,” he adds.

For Ashutosh Sharma, head of investments at Prosus Ventures (India), DeHaat’s holistic approach makes it unique. “They are addressing all the pain points of a farmer,” he says, adding that the journey spans from sowing till harvesting. Moreover, they are doing this by using technology, which makes DeHaat immensely scalable, he adds. 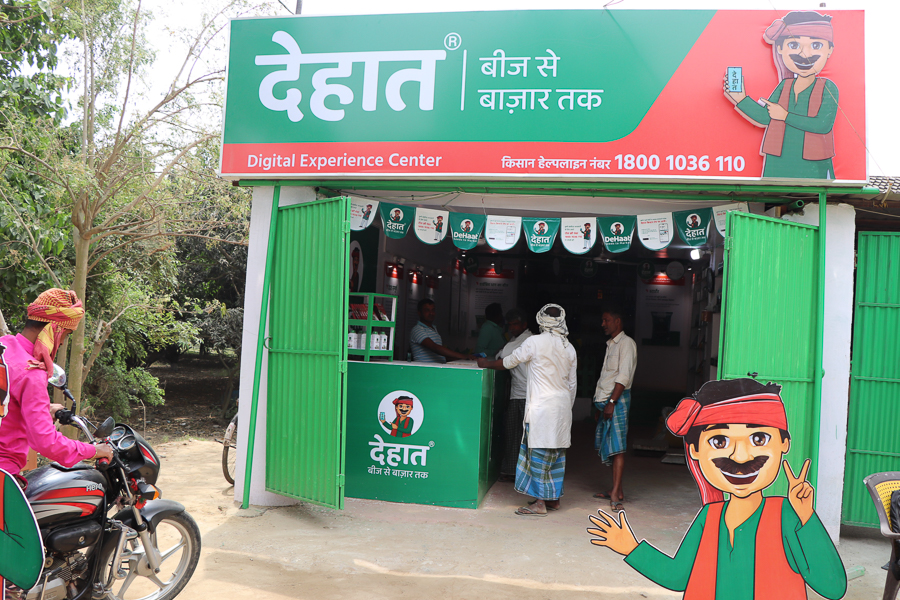 Kumar, for his part, reckons that DeHaat is poised for much larger play in terms of scale, expansion, impact and growth. “We are all set to replicate this model pan India,” he says, underlining the team is focussed on expanding reach and operations. 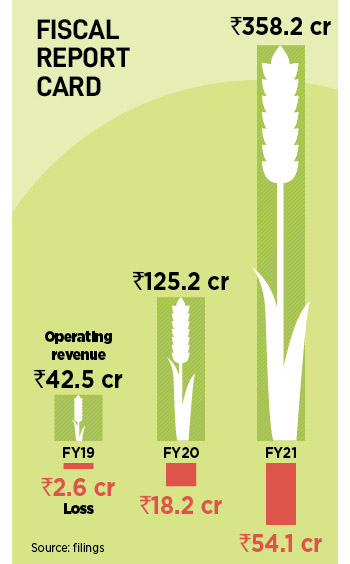 And the focus is not confined to India. DeHaat has started tapping into overseas market, and what is aiding the push is technology. The startup, he claims, has built a complete traceability system and digitised the backend of farming operations. What this means is using a QR code, one can get to see that where exactly the food is coming from.

Back in India, Kumar is betting big on a host of services that DeHaat has recently added. Take, for instance, financial services, which will gather steam over the next few months. What this means is a wider play for financing for farmers, insurance and micro-insurance. Then there is stuff like customised advisory to farmers based on the nature of their land, mechanisation, hardware, small implements.

DeHaat is also working on its platform to enable farmers opt for spray-on-pay-per usage basis or buying small implements. “Cattle feed is something we have recently started,” says Kumar, adding that the next item on the menu would be animal nutrition. The idea is to leverage the same distribution and communication network and not build a parallel or new supply chain. “What this means is doing more and more with existing the farmers’ network,” he adds.

Though Kumar has done a lot over a decade, what he relishes most are the three top learnings that agriculture teaches an entrepreneur. First is loads and loads of patience. There are no quick fixes. The fickle nature of agriculture and the involvement of tonnes of additional variables mean that even a well-laid out plan can go horribly wrong. “You can’t do anything. You just wait for another season to repeat your experiment or innovation,” he says.

The second big learning is empathy. “You’re talking about someone who is feeding everyone but is starving himself,” he says. Understanding their pain, he underlines, is very important. One needs to understand their mindset, their psychology before devising solutions. The third lesson is the need to have a full-stack approach. It can’t be bits and pieces.

Goa CM said - exit polls can show anything, answer on resort politics
India rescues Bangladeshi people trapped in Ukraine, Sheikh Hasina thanks PM
3 children who went to bathe after playing Holi in Tripura died due to drowning, 2 died in Odisha to...
Previous Post