Forbes India – Apps And Oranges: Behind Apple’s Bullying On Trademarks 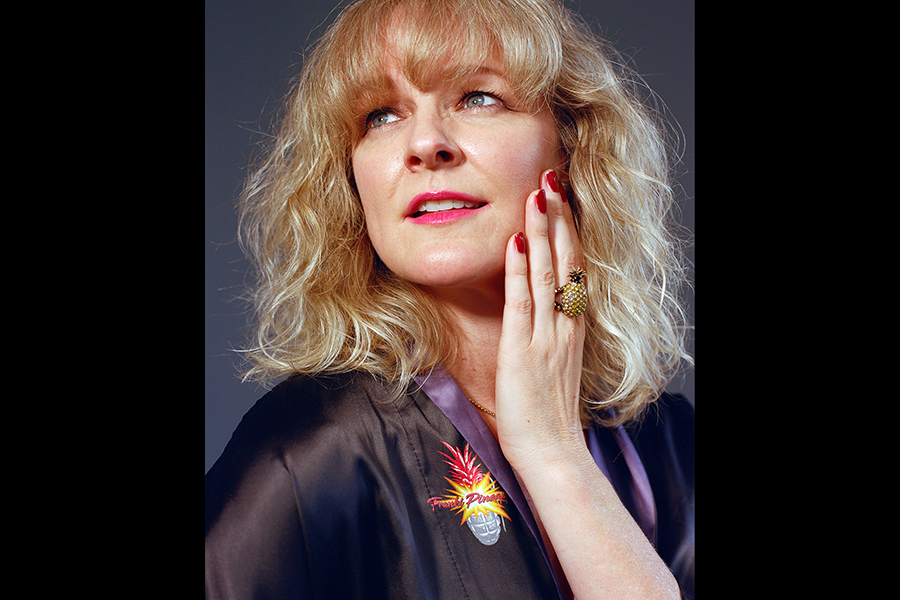 Stephanie Carlisi in Los Angeles on Friday, March 4, 2022. Carlisi was in a home recording studio working on her debut single when Apple filed an opposition to a trademark of her stage name, Franki Pineapple. (Jack Bool/The New York Times)

When Genevieve St. John started a sex-and-life coaching blog in 2019, she designed a logo for the business of a neon green and pink apple, which was cut open to resemble female genitalia.

Not long after applying to register the logo with the U.S. Patent and Trademark Office that year, St. John received an unpleasant surprise. Her request had been challenged — by Apple.

In a 246-page opposition filing, lawyers for the iPhone maker wrote that St. John’s logo was “likely to tarnish Apple’s reputation, which Apple has cultivated in part by endeavoring not to associate itself with overtly sexual or pornographic material.”

St. John, 41, a human resources professional in Chandler, Arizona, was crestfallen. Without the money to hire a lawyer and take on the tech behemoth, she decided not to respond to Apple’s challenge. That paved the way for a default judgment in favor of the electronics giant.

“I wasn’t even making money off it,” St. John said of her blog, which she has put on hiatus. “But it’s Apple, and I’m not going to argue with them because I don’t have a million dollars.”

St. John is one of dozens of entrepreneurs, small businesses and corporations that Apple has gone after in recent years for applying to trademark names with the word “apple” or logos of stemmed fruit. Between 2019 and last year, Apple, the world’s most valuable public company, worth $2.6 trillion, filed 215 trademark oppositions to defend its logo, name or product titles, according to the Tech Transparency Project, a nonprofit watchdog. That’s more than the estimated 136 trademark oppositions that Microsoft, Amazon, Facebook and Google collectively filed in the same period, the group said.

Apple is a more common word than corporate names like Microsoft or Google, and the high rate stems partly from that. Many copycats, particularly in China, have also tried drafting off Apple’s name or logo in the tech and entertainment industries to make a buck.

But Apple has frequently targeted entities that have nothing to do with tech or that are infinitesimal in size. It has even set its sights on logos that involve other fruits, like oranges and pears.

Its quarries have included an Indian food blog, the Energy Department, a Wisconsin public school district and Mattel, which makes the hit card game Apples to Apples. Apple also objected to an orange logo used by a curbside pickup startup named Citrus. Last year, it settled a dispute with a meal planning app called Prepear after the app’s creator agreed to change a leaf on its pear logo to make it look less like Apple’s.

The scale of the company’s campaign amounts to “bullying tactics, and they are unnecessary for Apple to protect the public from confusion,” said Christine Farley, a professor at American University’s Washington College of Law.

Citrus; the Energy Department; Super Healthy Kids, the company behind Prepear; and the Patent and Trademark Office declined to comment. Mattel did not respond to requests for comment.

Josh Rosenstock, an Apple spokesman, said the law “requires” that the company protect its trademarks by filing oppositions with the Patent and Trademark Office if there are concerns with new trademark applications.

“When we see applications that are overly broad or could be confusing to our customers, our first step is always to reach out and try to resolve these quickly and amicably,” he said. “Legal action is always our last resort.”

Apple files trademark oppositions against entities that have already received logo or name approval from the Patent and Trademark Office. In those oppositions, the company has argued that “Apple marks are so famous and instantly recognizable” that other trademarks will weaken the strength of its brand or cause the “ordinary consumer to believe that applicant is related to, affiliated with or endorsed by Apple.”

Some of those targeted said that while they were convinced their trademarks did not infringe upon Apple’s domain, they could not show the challenges were frivolous because they did not have the resources to fight the company in front of the Trademark Trial and Appeal Board. Between 2019 and 2021, 37 entities, or about 17% of those that Apple or its subsidiary Beats Electronics opposed, withdrew their trademark applications. Another 127 individuals or organizations, or 59%, did not reply to challenges and defaulted, according to data from the Tech Transparency Project.

Stephanie Carlisi, an independent singer-songwriter, said she was shocked when Apple took issue with the trademark of her stage name, Franki Pineapple, in 2020. In filings, Apple acknowledged that an apple and pineapple were different, but said they were “both the names of fruits, and thus convey a similar commercial impression.” The company also considered objecting to Carlisi’s logo, an exploding pineapple grenade, according to documents.

“It’s not even an apple,” said Carlisi, 46, who had just begun releasing music and has seven monthly listeners on Spotify. “You’re telling people that they cannot appropriate fruit or anything that has this connection to Apple, which is this juggernaut company.”

Founded in 1974, the company known originally as Apple Computer was not always so litigious. Before 2000, it filed just a handful of trademark oppositions each year, peaking at nine in 1989, according to the Tech Transparency Project. At least one of those oppositions was to an electronics retailer that sold computer parts under the name “Pineapple.”

In those years, Apple Computer was better known as a defendant in trademark cases. In 1978, Apple Corps, the holding company founded by the Beatles, sued Apple Computer for trademark infringement, the first salvo in a series of legal disputes between the two companies over the ensuing decades. In 2007, the two Apples finally agreed to give the Silicon Valley company all of the trademarks related to “Apple.”

By then, Apple, which had dropped “Computer” from its name, was filing dozens of trademark oppositions annually.

As Apple grew, its legal team most likely wanted to prevent the brand’s dilution, said Barton Beebe, a New York University Law School professor. In intellectual property theory, the legal argument isn’t that someone would be confused by two different trademarks, but rather that granting a new one would reduce the value of a household logo or name, he said.

“Dilution is death by a thousand cuts, and you’ve got to prevent the first cut,” Beebe said. “That’s the argument to judges.”

Apple has since created a template for challenging trademark applications, said Ashley Dobbs, a University of Richmond law professor. That’s evident in a comparison of its responses to two applicants, where it used cookie-cutter opposition language.

One response was to the Appleton Area School District, a 16,000-student public education system in Appleton, Wisconsin, which has a logo of three interlocked apples. The other was to Big Apple Curry, a New York City Indian cooking blog, over its name. In Apple’s filings against them, whole sections were copied word for word to establish the company’s brand value — “an estimated valuation of $206 billion” by Forbes in 2019 — and its “extraordinary level of fame and consumer recognition.”

Representatives for the school district and Big Apple Curry, which both removed their applications, declined to comment.

“There’s a cost efficiency going after multiple people with the same argument,” Dobbs said. She added that Apple had outpaced other companies — such as Disney and Warner Bros. — that have been litigious about intellectual property.

In 2019, Dr. Surya Reddy applied to trademark the logo and name of Apple Urgent Care, which runs clinics in California’s Riverside County. Apple objected, noting that his logo, like its own, included an apple with a piece missing and an “angled-detached leaf.”

Reddy said he thought Apple’s case was ridiculous because it is not a medical care provider. But he did not have the money to test that theory and dropped his application.

“I’m a small company,” he said. “Once they put in an objection, you feel so little.”

Carlisi, though, responded to Apple in court and won a concession. The company agreed to stop pursuing its opposition if she included a disclaimer on her trademark application noting that Franki Pineapple — a nod to her late father, Franki, and the fruit, sometimes thought of as a rebellious, feminist symbol — was not her real name.

While the legal escalation cost her about $10,000, Carlisi got some inspiration out of it. She said her debut single, which is about sticking it to the man and uses a well-known expletive, was inspired by her battle with Apple.

CM Yogi’s attack on Akhilesh Yadav, said- All boundaries were crossed during the election but…

CRPF DG said – Reduction in terrorist incidents in the Valley, said this about the return of Kashmiri Pandits