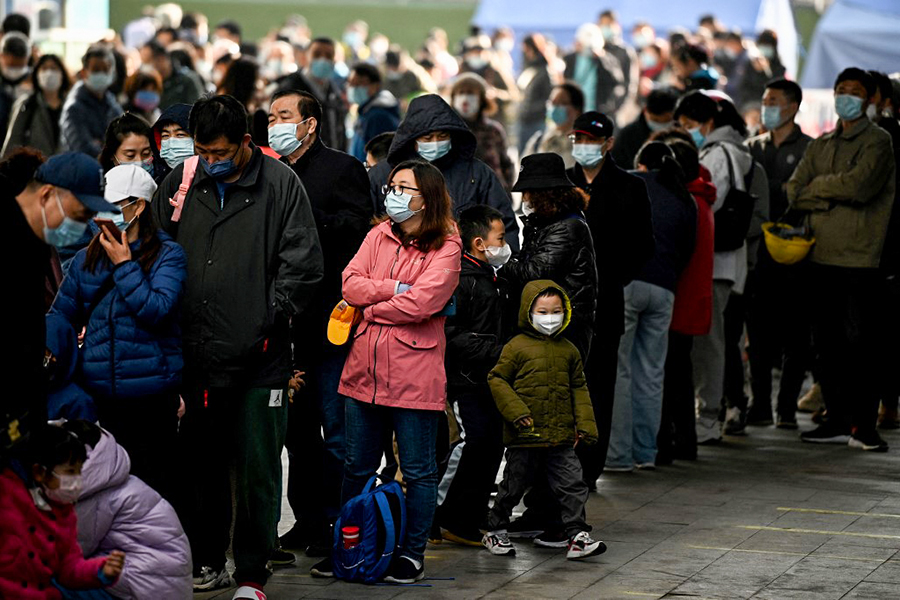 People queue to be tested for the Covid-19 coronavirus in Beijing on March 14, 2022, amid a record surge of infections across China. (Credit: Noel Celis / AFP)

Beijing, China: China, the country where the coronavirus was first detected in 2019, is among the last remaining devotees to a zero-Covid approach to the pandemic.

But after two years of virtually closed borders, mass testing, targeted lockdowns and quarantines, the strategy is being stress-tested like never before as cases surge across the country.

With millions currently under lockdown, can China’s approach hold out against the march of the Omicron variant?

What is zero-Covid? China essentially closed itself off from the world in March 2020 to follow a formula it calls “dynamic zero” for curbing outbreaks: strict lockdowns and immediate mass testing.
Unlike during softer lockdowns elsewhere, people in China can be banned from leaving their building or forced to remain inside a hotel room if they are considered high-risk contacts.

Shops, schools, tourist sites, office blocks and malls have been summarily locked down with people inside after the detection of a single close contact.

Officials are routinely dismissed or castigated in state media for outbreaks in their areas. That puts the onus on local authorities to move fast and hard on any clusters.

Residents are forced to stay at home at a moment’s notice, including the 17 million people of Shenzhen who were locked down on Sunday.

The government has said it will not renew expiring Chinese passports unless the holder has a good reason for travel — shredding outbound demand for travel.

Why has China held on? China’s caseload since the start of the pandemic — just over 115,000 — is a fraction of those recorded elsewhere.

The official death toll has stayed under 5,000.

Although cases from the chaotic initial outbreak in Wuhan in early 2020 are widely believed to have been under-reported, life since then has largely returned to normal.

Beijing’s communist leadership has made its handling of the pandemic a matter of political capital, saying the low death rate demonstrates the strength of its governance model.

It has highlighted chaotic Covid responses in the US as an example of the wider failures of liberal democracies. Analysts warn any change in strategy will also need to shift perceptions of the virus among the masses in China.

Loosening virus restrictions could also prove risky for President Xi Jinping as he seeks a third term in October after billing himself as the leader who keeps China safe.

What is the impact? Zero-Covid comes at a cost, both human and economic.

Analysts say repeated shutdowns of factories and businesses have contributed to the slowing economy.

And there has been a grinding impact on ordinary lives.

The distressing case of a pregnant Chinese woman miscarrying after a strict lockdown delayed her access to medical treatment reignited debate over the limits of China’s zero-tolerance approach.

Meanwhile, migrant workers have been left stranded from families for months due to onerous travel rules and restrictions.

Examples of extreme enforcement have sparked outrage, such as when health workers beat a corgi to death after the owners were sent to quarantine.

Can it be maintained? A top Chinese scientist said this month that the country should aim to coexist with the virus. Meanwhile, the government announced it was introducing rapid antigen tests for the first time, which would allow at-home testing — a potential loosening of the state’s hold on the health crisis.

However, there are concerns over the capacity of the country’s healthcare system and the efficacy of domestic vaccines.

Peking University researchers have warned China could suffer a “colossal outbreak” that would overwhelm its medical system if it relaxed restrictions to a similar level as in Europe and the US.

And officials are anxiously watching the experience of Hong Kong, where hospitals have struggled in a recent outbreak.

The city currently has one of the world’s highest death rates from the virus, as the Omicron variant cuts through its elderly population, among whom vaccine hesitancy is common.

Amit Shah was made observer for UP, these leaders got the responsibility of Uttarakhand-Goa
Body of student killed in Ukraine will be brought to India on Monday, not Sunday: CM Bommai
After the defeat, Sukhbir Badal said - the decision of the public will be accepted, will support AAP
Previous Post