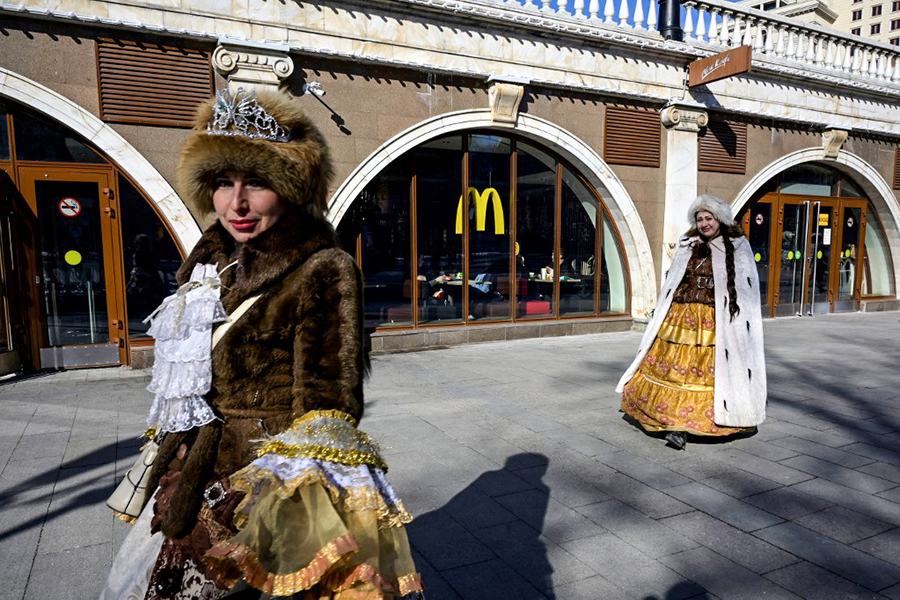 Women walk in front of a McDonald’s restaurant in central Moscow on March 9, 2022. McDonald’s, Coca-Cola and Starbucks on March 8, 2022 bowed to public pressure and suspended their operations in Russia, joining the international corporate chorus of outrage over Moscow’s invasion of Ukraine. Several of these companies, symbols of American cultural influence in the world, have been the subject of boycott calls on social media as investors have also begun to ask questions about their presence. (Credit: AFP)​

Russian prosecutors have issued warnings to several foreign entities — via calls, letters and in-person visits — including to Coca-Cola, McDonald’s, Procter & Gamble, IBM and Yum Brands, the parent company of KFC and Pizza Hut, according to the business daily, citing sources familiar with the matter.

They have threatened to arrest officials who have criticized the government or to seize assets, including intellectual property.

“The warnings have prompted at least one of the targeted companies to limit communications between its Russian business and the rest of the company, out of concern that emails or text messages among colleagues may be intercepted, some of the people (familiar with the matter) said,” according to the Wall Street Journal.

Russia has faced unprecedented sanctions imposed by Western governments after the invasion of Ukraine, with a growing list of companies announcing their withdrawals from the country or their plans to suspend activities there.

Russian authorities have boosted efforts to prevent money from leaving its borders and to support the ruble, which has already seen a precipitous drop in value against the dollar.

Without using the word “nationalization,” Russian President Vladimir Putin has said he is in favor of appointing “external” administrators to head such foreign companies in Russia “in order to transfer them to those who want to make them work.”

The prosecutor’s office on Friday meanwhile ordered “strict control” of companies that had announced a suspension of their activities in Russia, warning especially of increased monitoring of labor legislation compliance, under penalty of prosecution.

Why is vaccination of 12-14 year olds starting? The reason given by the president of NTAGI
After the massive victory in Punjab, AAP's roadshow, along with Bhagwant Mann, CM Kejriwal also join...
Now immunization of 12 to 14 year old children will start, 60+ will get precaution dose
Previous Post

The Supreme Court expressed concern over the false claims of compensation on death from Corona, said – there was no such imagination