Forbes India – Billionaires Clash Over The Future In A Caribbean Eden 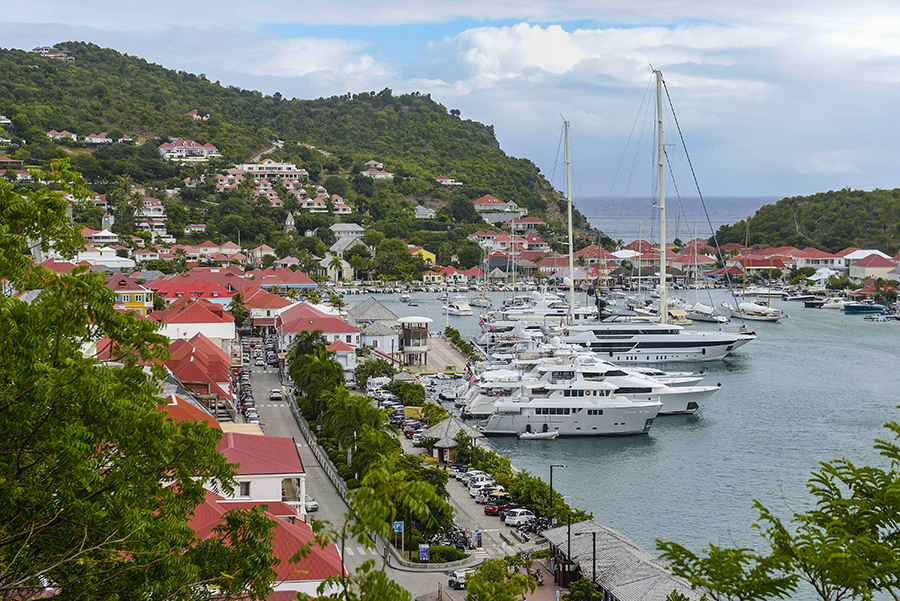 Megayachts in the harbor at Gustavia, the capital of the Caribbean island of St. Barts, Feb. 12, 2022. A legal feud over a proposed luxury hotel pits development against the fragile nature on this tropical Arcadia for the ultrarich. (Jean Vallette/The New York Times)

Midwinter on the Caribbean island of St. Barts is a kind of second hurricane season. December’s annual landfall of billionaires and celebrities was a Cat 5, with Leonardo DiCaprio, Mike Tyson, the world’s biggest megayachts, and Jeff Bezos and his girlfriend canoodling in their bathing suits.

But in the midst of this glitter cyclone, two days before Christmas, a judge hurled the latest volley in a legal battle that has pitted billionaire against billionaire, and human development against fragile nature on this playground for the 1%. The court ruled that a company headed by American hotelier Denise Dupré must stop construction of her second luxury hotel on the island, and refill a football field-size hole, intended for an underground parking garage, on a popular but environmentally precarious beach.

The ruling might signal a turning point in the hyper-development of this tropical Arcadia for the rich. The deconstruction alone will cost the developer what some parties involved estimate to be at least 50 million euros (about $57 million). The company won’t divulge the actual cost of the proposed project.

For four decades, two cultures have shared the biome of this tropical “little pebble,” as the French royals once called the island. Most of the current island natives are French-speaking descendants of a clan of Normandy peasants and enslaved people who arrived on the agriculturally inhospitable outpost in the 17th century. The original island inhabitants were Arawaks and Caribs.

The islanders’ forebears survived centuries during which power passed back and forth between pirates, England and France — and even 100 years of Swedish rule — before settling into the modern era, first as part of the French overseas department of nearby Guadeloupe, and now as a self-governing collectivité still operating under French law. Until 40 years ago, jobs were so scarce that residents went to other islands — nearby St. Thomas mainly, where a fishing village called Frenchtown was settled in the 19th century by laborers from St. Barts — for work. St. Barts itself wasn’t electrified until the 1980s.

The newer colonists — American and European celebrities and Wall Street tycoons — who, like the other non-indigenous species on the island, have proliferated without predators, are the socioeconomic descendants of the Rockefellers and the Rothschilds. The latter sailed onto this arid, minimally populated speck in the late 1950s, were charmed and built a pair of Xanadus on mountaintops overlooking azure waters.

Forty years after the island was electrified, St. Barts is the setting for a theater of conspicuous consumption. In the past five years especially, the background noise on some parts of the island is not birdsong but increasingly the clack-clack of drilling through rock, the grunt of earth-moving machines and the buzz of small prop planes delivering and retrieving tourists and their Vuitton baggage from an airport with a hair-raisingly short runway. (This reporter, from the cafe of a five-star hotel nearby, witnessed one small plane abort a landing in a terrifying maneuver. If any of the swells noticed, no one reacted.)

Heavy trucks crack the asphalt of serpentine mountain roads dotted with construction sites, compounding a traffic problem that can, with its mingling of gorgeous weather, idling luxury cars and sour, but fashionable, drivers, be reminiscent of Los Angeles. Every hundred yards or so, another construction permit is glued to a temporary wall.

Denise Dupré has a house on the island and has been visiting it for 20 years, but the American philanthropist and businessperson who has taught at Harvard, is an obscure figure to the locals, and not active in the social scene.

Her hotel development, L’Etoile, is planned as an ultramodern multistory concrete structure, on the footprint of a smaller resort destroyed by Hurricane Irma in 2017, on a crescent of sand along St. Jean Bay. It would be situated beside and compete with a historic older luxury hotel, the Eden Rock (owned by a Brit, David Matthews, who happens to be the father-in-law of the Duchess of Cambridge’s sister, Pippa Middleton).

The developers planned a hotel with 50 rooms, a swimming pool and a beachside underground parking garage. In December 2019, the government granted the permit, against the advice of environmentalists and some of its own elected officials.

Arguments over the construction permit went to court several times before the company broke ground in March 2021. Eden Rock Hotel, co-owned by Matthews and the German luxury hotel company Oetker Collection, joined the environmentalists in opposing it. Russian oligarch and island homeowner Roman Abramovich is not a party to the lawsuit, but is deeply involved in the island’s environmental restoration. He built a soccer field for the community and paid to restore a salt pond that environmentalists then accused the L’Etoile developers of polluting with cement runoff. (The company denies this.)

The two sides in the lawsuit faced off against each other in four emergency court hearings in 2020 and 2021. The judge, while asking for modifications pertaining to the project’s building height, allowed construction to begin in March 2021. In July 2021 the judge suspended the company’s modified construction permit pending further legal hearings, but the company continued construction under the original permit.

A group of young people calling themselves Ouanalao’s Guardians (Ouanalao was the Arawak name for the island) had circulated a change.org petition against the project and got 2,200 signatures. Another petition by an island environmental organization, St. Barts Essentiel (SBE), collected signatures of about 2,700 of the 10,000 islanders, demanding the project be scaled back. But the construction work continued throughout 2021, with machines blasting away at the foundation hole.

William von Mueffling, a New York investment manager and a longtime island resident, is a supporter of the environmentalists and critical of the developers. The L’Etoile project “clearly did not appeal to the vast majority of people on the island who have enough challenges with housing, traffic and water pollution,” he said. “SBE keeps the island honest. It is unfortunate that a nonprofit has to do the enforcement work of the collectivité, but that is the reality.”

Two days before Christmas 2021, the court definitively canceled all iterations of the project’s construction permit, on the grounds that the foundation hole posed a risk to the safety of employees and guests in the event of a hurricane-related flood.

Dupré’s group had already developed another hotel that it operates — the austere, five-star Le Barthélemy Hotel & Spa, on a beach called Grand Cul de Sac, which has had its own environmental issues. Le Barthélemy received two notices, in 2019 and 2021, from the government about chemical and biological waste leaking into the water.

Government inspectors have recorded E. coli levels 800% higher than the legal limit. “I kite surf at the lagoon almost everyday, and my worst fear is not getting in an accident but falling into the polluted lagoon,” said Patrick Ubbeda, a local restaurant owner.

In one of two formal notices to the hotel signed by the island’s president, Bruno Magras, and obtained by The New York Times, the government accused the company of ignoring a 2019 request to deal with the pollution problem. A Dupré spokesperson, Alex Stanton, denied that the company ignored the notices and said the hotel will have a new filtration system this year.

The Dupré companies started the projects as the island was dealing with new concerns about sustainability. A 2016 Wildlife Conservation Society report stated that the island’s environment is “rapidly degrading” because of land-based pollution draining into the sea and destroying marine habitats, urbanization and overfishing. A year later, Hurricane Irma devastated the island, worsening an already dire housing shortage for workers.

That tension may explain some of the animosity toward Dupré and her husband, Mark Nunnelly (a former managing partner at Bain Capital, a former CEO of Domino’s Pizza and an investor in an outsourcing concern, a call center and other ventures). Someone scrawled “Get Out Dupré Pig” in red on the white construction wall — a highly unusual act of vandalism on the mostly crime-free island. One of the English-language island online forums has a chat titled “Death to Domino’s Pizza” in reference to the hotel project.

“In one corner you have this billionaire business firm and in the other a bunch of local people saying please don’t damage our marine life,” said a Youngstown, Ohio, attorney, Eddie Czopur, who has been staying on St. Jean Bay during the winter season for years. “It was like a ‘Rocky’ story, that the locals won.”

But Dupré and Nunnelly are hardly the only superrich who have been accused of making plans that seem to ignore island scale or Caribbean aesthetic. Islanders have watched as tycoons have increasingly competed to see who can anchor the biggest yacht in the harbor, or build the biggest villa.

The local government recently restricted the size of new villas to under 150 square meters (a little more than 1,600 square feet). But at least 50 previously issued construction permits are still in the pipeline — meaning new mega mansions will surely be erected. The once-crystalline waters around the island have turned cloudy as construction-runoff sediment damages reefs and drives off sea animals. One marine biologist who works on the island told me she cried after returning to a diving site once teeming with turtles and sharks and finding it barren.

Dupré and her husband declined to comment for this article, referring questions to Stanton, a spokesperson for Dupré and her company, SAS St. Jean Beach Real Estate. He said the company will appeal the ruling against the L’Etoile permit to a higher court in France in March, but that adjudication will take at least 15 months. Dupré still hopes to build a hotel, but will fill in the hole as ordered once the collectivité grants permission, he said.

After Punjab, now in West Bengal, BSF jawan shot his partner, took his own life too

Unity 3D Roles & Responsibilities Before You…