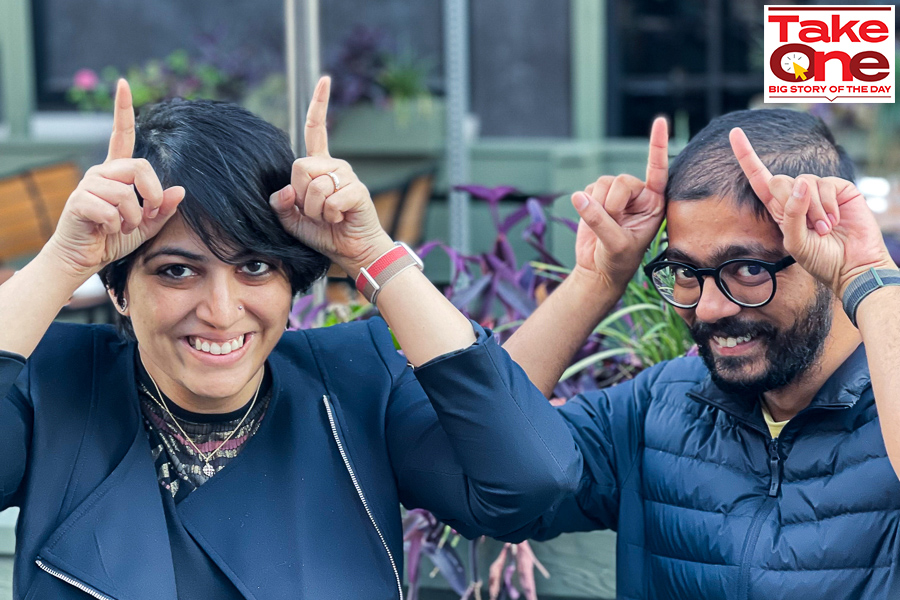 In 2013, Tanmai Gopal was taking the devil by the horns. The IIT Madras alumnus, with an integrated dual degree of BTech and MTech in computer science, was getting ready to take a stab at the heart of the problem. “It was insanely frustrating,” recalls Gopal, who stayed away from campus placements because he wanted to build a venture that had a huge impact.

Back then, building applications business was quite painful. Progress in technology, he reasoned, should make things easier instead of complicated. For developers and engineers, the predicament was unique. Gopal knew something was wrong. He co-founded 34 Cross, a product development and consulting firm, in 2013. “I wanted to fix the problem,” he recalls.

The same year, Rajoshi Ghosh has successfully battled her inner demons. The graduate in computational biology from National University of Singapore had started her career with a stint in research. She had been creating biodiesel from green algae in her first job, but a couple of years in to the research, she realised something was missing in her life. “I wanted to do something that had more immediate impact,” she recalls. So she took up a teaching programing for a bunch of budding entrepreneurs and students in Ghana, West Africa. After a year, she sensed that her calling was in the startup ecosystem. Back in India, she met Gopal in Chennai, and 34 Cross got a co-founder.

Four years later, in mid-2017, the bootstrapped company was fast running out of money, and the future looked bleak. “We were naive when we said we would never need venture capital [VC],” recalls Gopal. “There were dark days,” he recalls, adding that at times the fledgling venture failed to make payrolls for two months. 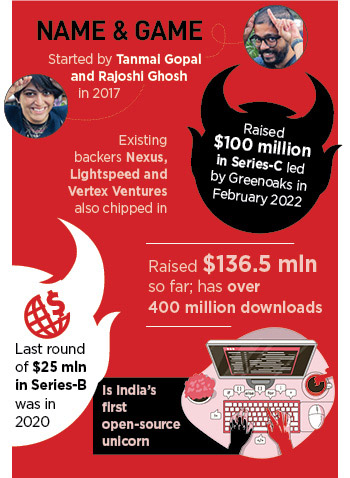 What, though, made journey tough was the predicament of the co-founders. As a consulting firm, 34 Cross was also into building tools to validate ideas to help developers. And the results were encouraging. “We knew the technology and products were working,” says Gopal. The problem, however, was time or lack of time. The consulting role meant that a huge chunk of time was spent on clients and their products. The team needed time and money to build their product. Ghosh summoned an emergency meeting. “Guys, we have to stop doing this, and raise VC money,” she implored.

That is when 34 Cross shuttered, and Hasura was born with the aim to make it easier for developers to access data. The first meeting with a venture capitalist was scheduled in Bengaluru. The co-founders drove from Chennai, entered the room and the first question stumped them. “Are you a food tech company,” one of the funders in the room asked. The co-founders were stunned, and looked at each other in disbelief. More such encounters, though, were in the offing. While a few VCs found hard to understand the difference between Software as a Service (SaaS) and an open source venture, some thought the startup did not have product market-fit.

This was until they met Sameer Brij Verma, managing director at Nexus Venture Partners. “I liked the team and knew they were building something special,” underlines the VC who was introduced to the co-founders by Abhinav Asthana, the founder of Postman, which is an Application Programming Interface (API) powerhouse.

Verma met the team, liked the vision but did not take the plunge. Reason: The VC knew the co-founders were treading the wrong path. “I told them that if they ever shut their consulting business then I can have a look at them,” he says, adding that Nexus did not invest in services’ company. In November 2017, Nexus Venture Partners seed funded the venture with $1.2 million.

Five years later, Hasura adds a mythical horn to its head by turning unicorn [a startup that has reached a valuation of $1 billion]. In February, the open source platform raised $100 million in Series-C funding at a valuation of $1 billion. Nexus, too, participated in the round along with a bunch of existing investors. “The second time I met him [Gopal] I knew these are the great guys to back,” recalls Verma, adding that Nexus has so far pumped in $I5 million into Hasura. “The Hasura team gets full credit for what they have built so far,” he says. 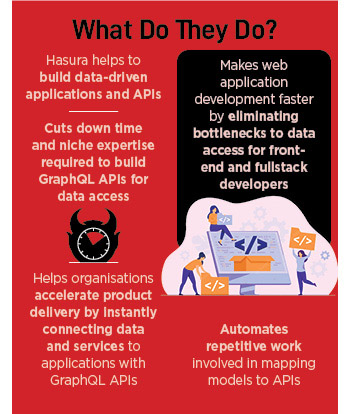 The journey, however, was not a straight one. During the first seven months or so, the startup went through multiple iterations. “The first version of whatever they were building got scrapped out,” Verma says. They were constantly improvising their product and making it as efficient as possible. The inflection point happened in 2018. Neil Shah, partner at Greenoaks, one of the backers, explains what went right.

Since the launch of their GraphQL engine in 2018, Hasura witnessed explosive uptake across countless organisations, from grassroots open source projects, to some of the largest companies in the world. The common thread is substantial improvements in developer productivity and decreased time-to-market for mission-critical applications. There are few better signs of a powerful developer experience than enthusiastic adoption, reckons Shah. “And on this count, there are not many companies like Hasura,” he says.

If the game is unique, then so is the name. Gopal says that “it just took 45 seconds” for them to call their startup Hasura. On one of the long car drives in Chennai after shuttering 34 Cross, Gopal and Ghosh, along with two other core team members, were mulling about the new name for the startup. “Why don’t we call it Asura,” asked one of the geeks. His justification was simple. Apart from being a cool name, Asura sounded edgy and had a streak of distinctiveness. Another fellow passenger chipped in with his two cents. “Why don’t we call it Hasura,” he quipped. His reason too was convincing. Pick up ‘H’ from Haskell, a computer programming language, and make it Hasura. “It just took 45 seconds for all of us to agree,” says Gopal.

The name is potent, and so is the various layers attached to it, Gopal explains. “Asura has a positive connotation,” he claims. “It is not devil, but helps in warding off the devil,” he adds. There is another connect with the computer science world. Daemon is a computer programme that runs as a background process. Daemon and demon gelled seamlessly. Hasura, he underlines, has lived up to its name and billing by fighting on multiple front. For an open-source company, he points out, the first major hurdle is project-market fit. “Then comes product-market fit and then GTM (go to market) and scaling,” says Gopal.

Making a transition from project-market to product-market is not easy. “It is like we have been building two companies,” explains Gopal. Project-market fit is when users and developers use it for free. “People have to love it, that is why it goes viral,” he adds. The challenge is the next step when the company builds a commercial version of the product. “People should be willing to pay for it, and it’s a hard thing to do,” he says, adding that Hasura is now in the third stage of GTM. “We are starting to scale our go-to-market product,” he says.

Some priceless learning from 34 Cross—staying capital efficient being one of them—has armed Hasura with right kind of ammunition. “We still have most of our Series-B money in the bank,” says Gopal, declining to share the financials of the company. Another learning has been to strike a delicate balance between being flexible and staying stubborn. An entrepreneur, he underlines, needs to listen to the world. “You need to understand when you are being stupid, and when we you should stop doing a thing,” he says. But there are times, he lets on, when one needs to be stubborn and go for the kill. Turning unicorn might be a great milestone but the job doesn’t end. “We just need to execute, execute, and execute,” he says.

Looks like Hasura’s devil’s instinct is in full play.

After Punjab, now in West Bengal, BSF jawan shot his partner, took his own life too

In the seventh phase of UP elections, 54.18 percent voting till 5 pm, the highest voting in Chandauli

On the second day of Gujarat tour, PM Modi did a…

How To Choose The Best Swimming Pool Cover To Fit…

WA congressman is right we should ban Russian oil…

How Do I Sell My Car Online in the U.S.?