Forbes India – Early To Bet & Early To Rise: How Antler Is Changing Early-stage Investing In India 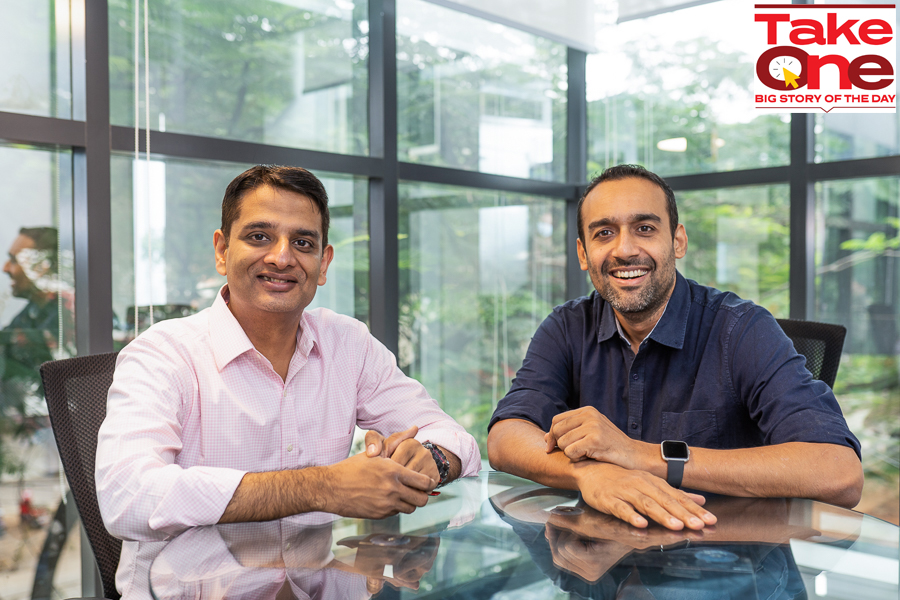 Can you make bets when you are blindfolded? “You need some kind of data,” says Nitin Sharma, a seasoned venture capitalist [VC]. The reason is simple. Information of any kind—about the product, user, scale and team—helps a VC in assessing risk and potential of an investment at all stages of funding, starting from the seed round. The visual sense, therefore, becomes the main tool in placing bets.

But what if all visual clues are blocked? No offering, no consumer, zero team and nil operations. Can bets still be made? “Yes,” reckons Sharma, who has had a stint in the US with venture capital firm NEA, was a founding team principal at Lightbox Ventures in India, and played angel when he founded FirstPrinciples VC during his solo investment journey.

When there is no data for the diligence, then it is all about psychology rather than economics. “Pre-seed stage funding is about the idea, belief and the founder,” stresses Sharma, a partner at Antler India. “Everything else comes later.” Headquartered in Singapore, Antler is one of the largest and fastest growing early-stage investment platforms in the world, which started India operations last year. Pre-seed, explains Sharma, in the evolutionary journey of a startup, is a stage when the founder just has a concept. “There is no investment deck,” he says, decoding the mindset of a pre-seed stage investor.

But how does a founder-turned VC look at pre-seed rounds? Is it required? Rajiv Srivatsa reckons there is a pressing need. “I had never written cheques in my life,” laughs Srivatsa, who co-founded online furniture startup Urban Ladder in 2012, and turned VC when he joined Antler India as partner. “I have seen lots of ups and downs during my journey,” he says.

For a founder, every stage of growth brings own set of challenges, pre-seed takes the cake. While a 0-to-1 and 1-to-10 growth in a startup’s life is excruciatingly hard, the hardest of all is perhaps the phase before zero—the ideation stage. All one needs is a little bit of time to validate ideas, hire the first set of people, and experiment. “What you need is a founder’s empathy,” says Srivatsa, adding that most of the people in Antler India team have been a founder.

A founder and a funder are spearheading Antler’s bold pre-seed bets in India, and are playing the early-stage investment game in a differentiated manner. “When you are taking such bets, you are not in the deal flow business because deals don’t exist,” says Sharma. Antler, he lets on, is into company-creation business.

In little over a year, Antler has backed 16 ventures, has a ticket size of little under Rs2 crore, and the plan is to go steady rather than press the gas pedal. “What we are doing is probably more akin farming,” says Sharma. Antler, he explains, is helping people plant seeds and ideas in new spaces that do not exist in India. “We are coming very early but staying disciplined and distinct in approach,” he says.

Take, for instance, Bookee. The Software as a Service (SaaS) startup focussing on the US fitness industry is building best-in-class software to enable over three lakh fitness entrepreneurs across the world to scale their businesses. Then there is Codedamn, an interactive coding platform that makes industry-level coding skills accessible and is solving for interactive learning at scale. Founded by 22-year-old Mehul Mohan, Codedamn claims to have thousands of registered users, and paying users from over 60 countries. It recently released Codedamn Creator, a tool that enables teachers and creators anywhere to launch their own interactive programming courses.

Another interesting bet is Humit, a social music platform. Founded by BITS Pilani graduates Rohit Ganapathy, Prithvi Sankar and Ishaan Negi, Humit aims to reinvent music sharing and discovery by leveraging community and social taste-making. “It is reimagining the way people discover, share and express themselves with their taste in music,” says Sharma.

Antler is not only looking for distinctive ideas, but is also catching potential founders early. There is the Antler India Fellowship—where college students get an equity-free grant of $20,000—to unearth entrepreneurial talent on college campuses. So far, eight ideas have got funded. Srivatsa explains the strategy to go hunting across campuses. “Though not new, college founders is a stronger trend that one notices [in] this decade,” says Srivatsa.

One such example is of Muskaan Sancheti and Raghav Jhawar. The 22-year-old graduates from Shri Ram College of Commerce in New Delhi co-founded The State Plate in August 2020. A curated platform for India’s regional foods, The State Plate is trying to solve for pan-India accessibility of regional cuisine. From West Bengal’s gobindobhog rice and South India’s murukkus to Nagaland’s bhoot jolokia pickle and Jamnagar’s dry-fruit rich kachoris, the startup houses a diverse range of kitchen essentials and iconic delicacies.

Srivatsa explains why India is witnessing a tsunami of young founders. People realise younger means more risk appetite, more freedom and lesser dependencies. “They are far more confident as compared to when I was their age. I started at 33,” he says. “There’s just far more of ‘let’s dream big early on’ today.”

Youngsters and first-time founders may be the flavour of the season, but Antler’s portfolio also has a fair share of second-time entrepreneurs. Srivatsa lists out two big advantages of backing seasoned entrepreneurs in their second stint. First, rich learning from their maiden venture makes them understand what and how to do things correctly the next time around. Second, they also know what not to do.

Take, for instance, tech-enabled leadership development platform Peak Performer. It is a full stack solution to help companies upskill managers at all levels. Second-time founders Aishwarya Goel and Nilesh Agarwal are building the platform by integrating custom 1:1 coaching, continuous learning, assessment and behavioural growth. Last October, the duo launched a new app that enables a more intelligent, automated and continuous coaching journey, along with a host of new features.

Another example is of Mumbai-based Bold Finance, which is co-founded by ex-McKinsey and ex-Flipkart alum Nikhil Jain and Durgesh Suthar, respectively.  A financial services platform that aims to disrupt the unorganised gold loan market in Bharat, Bold Finance leverages existing jeweller shops for customer acquisition, gold appraisal, and loan disbursement while partnering with banks to underwrite loans and facilitate storage for gold collateral. While Jain has had deep domain expertise in the jeweller and gold loan industry along with experience in leading digital banking projects for top national banks at McKinsey, Suthar has led the engineering team at xto10x, developed SaaS products used by over 200 startups and built scalable tech systems at Flipkart.

Bold bets, one might argue, also come with a warning: Big failures. For Antler, which is taking an unconventional approach by shunning ‘copy and paste’ models and backing innovative ideas, the downside could be huge. After all, some global data and studies suggest that the highest percentage of failure is at the pre-seed stage. 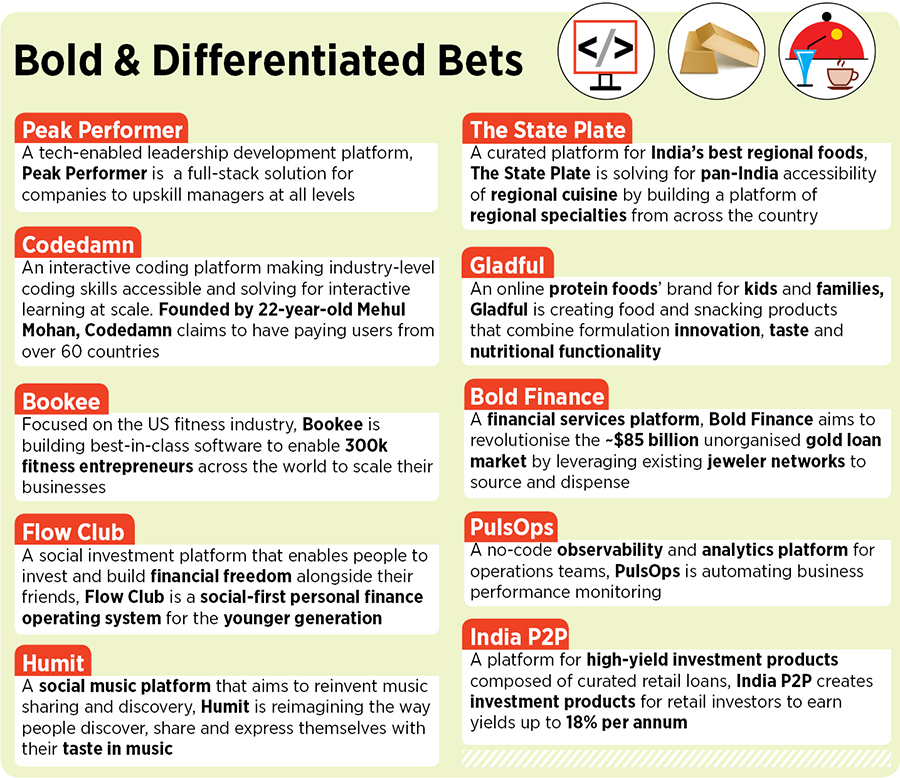 Sharma is aware of the flip side. “The easiest part of investing is to write the cheque,” he says. “The hard part begins after that.” An average Indian VC, he reckons, is still not a risk-taker. If one is only funding derivatives, then one is not taking enough risks for great returns. Though Antler might be one of the early ones to give an institutionalised shape to pre-seed funding, other global biggies, such as Accel, have also jumped in the fray.

Sharma, though, is not bothered with the space getting crowded. He knows the game is not about the velocity of deals. One of the hardest things at pre-seed stage, and in the quest to hunt for understated founders, is to have loads of patience. “At times, it is frustrating,” he says. Reason: The best storytellers win, and often great founders are not just great storytellers. Antler, he underlines, is trying to strike a balance between looking for businesses that have potential, hunting for ideas that are fundamentally sound and scouting for founders with right personality traits and storytelling abilities. “We are looking for diamonds in the rough,” he signs off.

Who will be the Deputy CM in UP? Big preparations for Yogi’s swearing-in

Forbes India – Simply Speaking: With Holi Around The Corner, Explore The Magic Of Colour

Forbes India - Simply Speaking: With Holi Around The Corner, Explore The Magic Of Colour