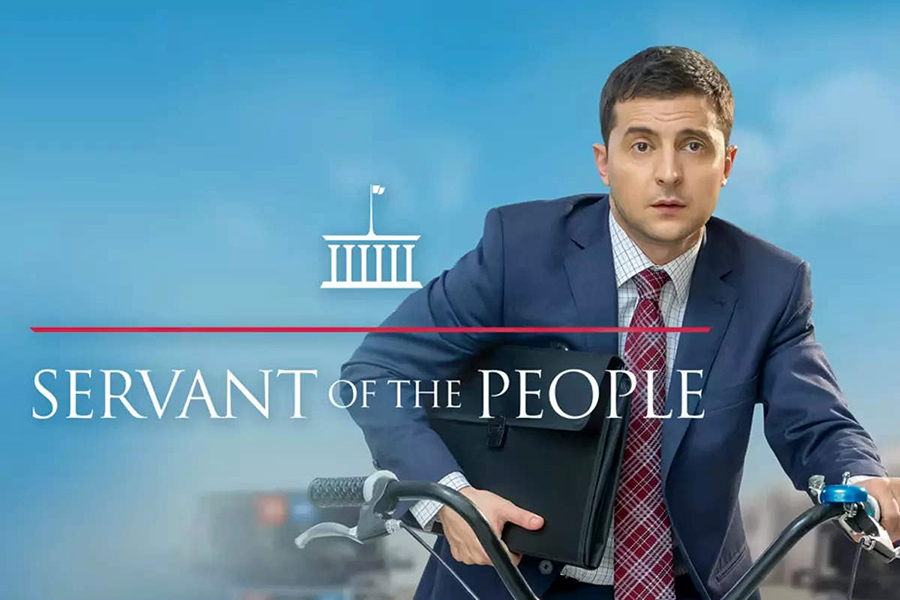 The success of the show ‘Servant of the People propelled Zelensky to the presidency in real life.

Stockholm, Sweden: First one, then two, then 20: a small Stockholm agency has in recent days been deluged with bids for the rights to air the hit comedy series starring Ukraine’s President Volodymyr Zelensky, a former actor turned wartime hero.“It’s been very, very busy. All around the world, people have asked for the rights because they want to broadcast it,” explains Eccho Rights co-founder Nicola Soderlund in the agency’s elegant offices in the Swedish capital.

Since the start of Russia’s invasion of Ukraine, broadcasters such as Britain’s Channel 4, Greece’s ANT1 and Romania’s PRO TV have rushed to join those who have already snapped up the rights to “Servant of the People”, which first aired in Ukraine in 2015.
“I think last week we made maybe 15 deals and we are in negotiations with another 20 countries,” says Soderlund, a poster advertising the series hanging above his desk.

In Italy alone, three or four broadcasters are currently vying for the rights, while in Greece, the show is airing nightly on primetime.

“In a way, it’s an act of solidarity with the Ukrainians, and at the same time, of curiosity — you want to see who he is,” Soderlund says of Zelensky.

The president’s stature has soared on the international stage since the start of the invasion, impressing the world with his fearless determination in the face of the Russian onslaught.

Soderlund first met Zelensky 10 years ago, when the Ukrainian was developing a game show called “Crack Them Up” in which ordinary people try to make comedians laugh, a concept later sold to Vietnam, China and Finland.

“I went to lunch with him in Kyiv,” recalls Soderlund. “He had all these crazy and funny ideas”.

Pulling out his phone, he shows selfies of himself posing with Zelensky at the Cannes film market in 2016 — held alongside the famed film festival — where producers, distributors and buyers do business.

At the time, it was unimaginable that this “very funny comedian, very popular and loved by audiences” would go on to become Vladimir Putin’s main target and “this world leader who embodies and speaks for the whole nation”.

“We needed a hero like him, after Trump and all that,” Eccho Rights managing director Fredrik af Malmborg interjects.

With “Servant of the People”, life imitated art.

In the series, which ran for three seasons, Zelensky played a high school teacher propelled to the presidency after a student’s video of him ranting about corruption in Ukraine went viral.

The show’s success propelled Zelensky to the presidency in real life.

“He always said, ‘In the US they’ve had actors becoming president for a long time'”, af Malmborg recalls.

While the company hasn’t had any contact with Zelensky himself recently, Eccho has been in contact with some of his representatives.

“One has fled to Turkey and the other is in Rotterdam, but they are in contact with ‘Vova’, as they still call him”, af Malmborg says.

The details of the rights contracts being negotiated are confidential, but the rights cost “around a million euros”.

Eccho Rights also has another series produced by Zelensky in its catalogue, “Svaty” (“In-Laws”).

The company, which employs around 40 people in Stockholm, London and Istanbul, has donated 50,000 euros to the Ukrainian Red Cross and plans to donate more as more contracts are signed.

How is the BJP's position in the presidential election after winning five states? what do the figur...
'The war between Russia and Ukraine will end only through talks', India said in the UN
Mother cried after seeing daughter returned from Ukraine, father hugged and distributed sweets at th...
Previous Post

Yogi Raj again in UP, BJP created history, these are 5 big reasons for victory