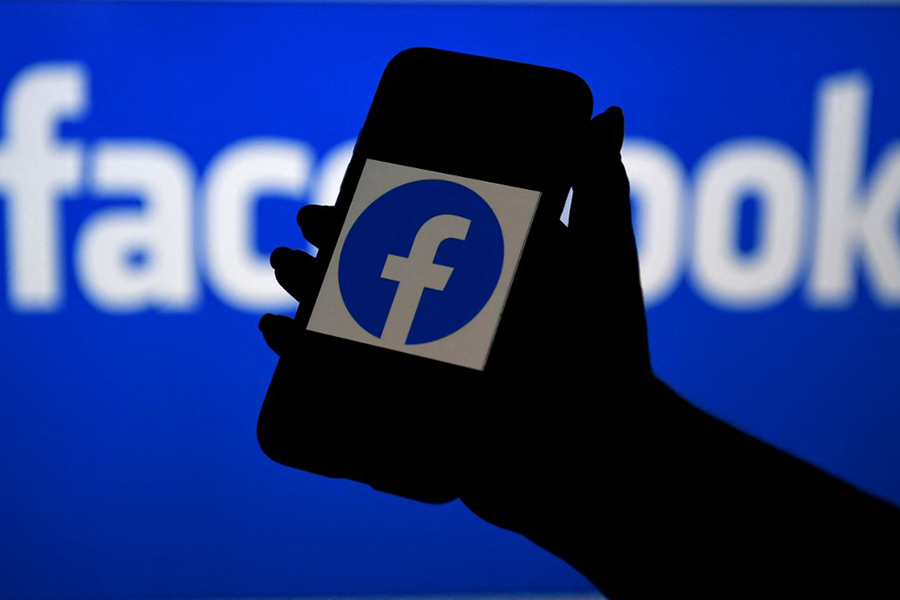 Facebook said March 10, 2022 that due to the invasion of Ukraine it has temporarily eased its rules regarding violent speech to allow statements like “death to Russian invaders,” but not credible threats against civilians. (Credit: OLIVIER DOULIERY / AFP)

Washington, United States: Facebook has temporarily eased its policy on violent speech after Moscow’s invasion of Ukraine, allowing statements like “death to Russian invaders” but not credible threats against civilians, the tech giant said Thursday.

Moscow’s internationally condemned attack on its neighbor has provoked unprecedented sanctions from Western governments and businesses, but also a surge of online anger and debates over social media’s role in the war.

“As a result of the Russian invasion of Ukraine, we have temporarily made allowances for forms of political expression that would normally violate our rules like violent speech such as ‘death to the Russian invaders,” Meta said in a statement.

“We still won’t allow credible calls for violence against Russian civilians,” it added.

The firm did not reply to a request seeking confirmation of the policy’s geographic boundaries.

Meta, which counts billions of users globally across its apps, has previously struggled with what it would allow people to post in moments of upheaval.

In July 2021, the firm temporarily allowed posts calling for “death to Khamenei”, referring to Iran’s supreme leader Ayatollah Ali Khamenei, during protests that rocked the country.

Tech platforms have had to navigate a slew of thorny issues related to the war in Ukraine, such as when US Senator Lindsey Graham called for the assassination of Russian President Vladimir Putin in a televised interview and on Twitter.

“The only way this ends is for somebody in Russia to take this guy out,” says Graham’s tweet from March 3, which Twitter has not taken down.

“A call for violence here, by the way is also a call for resistance because Ukrainians resist a violent invasion,” he added.

But some expressed deep concerns, like Lehigh University professor Jeremy Littau who tweeted: “‘We don’t allow hate speech except against certain people from a certain country’ is one hell of a can of worms.”

Facebook and other US tech giants have moved to penalize Russia for the attack on Ukraine and Moscow has also taken steps to block access to the leading social media network as well as Twitter.

Russia thus joined the very small club of countries barring the largest social network in the world, along with China and North Korea.

Since Moscow’s invasion of Ukraine last month, Russian authorities have also stepped up pressure against independent media, though press freedoms in the country were already rapidly waning.

Moscow blocked Facebook and restricted Twitter the same day last week that it backed the imposition of jail terms on media publishing “false information” about the military.

In this context, Facebook had played a key information distribution role in Russia, even as it endures withering criticism in the West over matters ranging from political division to teenagers’ mental health.

The war is running parallel with a period of unprecedented crackdown on the Russian opposition, which has included protest leaders being assassinated, jailed or forced out of the country.

Big US tech firms like Apple and Microsoft have announced they are halting the sale of their products in Russia, while other companies have made public their “pauses” of certain business activities or ties.

Last week, US internet service provider Cogent Communications said it had “terminated its contracts with customers billing out of Russia.”

ED raids 9 locations in 54 crore bank fraud case, 10 lakh cash recovered
'Why did the Lok Sabha speaker suddenly erupt in the middle of the discussion', also prevented the F...
Bhagwant Mann to meet Governor in Punjab at 10.30 am today
Previous Post

Baba bulldozer picked up and threw the cycle in UP, see Irfan’s cartoon

What is the meaning of defeat of Congress in five states? Congress’s challenge increased with AAP’s victory

What is the meaning of defeat of Congress in five states? Congress's challenge increased with AAP's victory