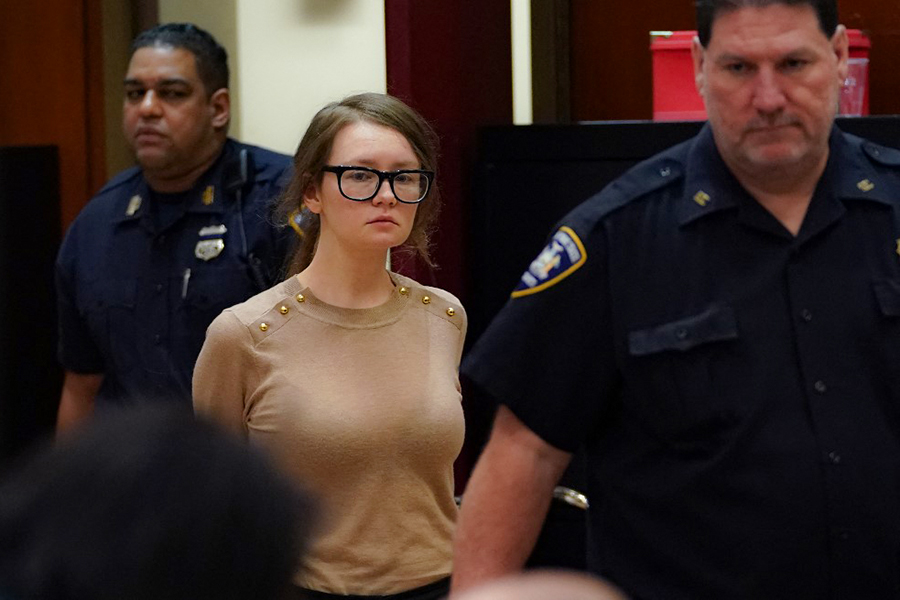 Anna Sorokin better known as Anna Delvey, the 28-year-old German national, whose family moved there in 2007 from Russia, is seen in the courtroom during her trial at New York State Supreme Court in New York on April 11, 2019. – The self-styled German ìheiressî has been charged with grand larceny and theft of services charges alleging she swindled various people and businesses. (Photo by TIMOTHY A. CLARY / AFP)

NEW YORK — Even in the days leading up to her deportation, Anna Sorokin appeared not to believe media speculation that she would soon be sent back to Germany. The rumors were devastating to the fake German heiress, who prefers to be called Anna Delvey and whose exploits were fictionalized on “Inventing Anna,” a Netflix series created by Shonda Rhimes and released last month.

Since her 2017 arrest and subsequent 2019 conviction by a Manhattan jury for bilking banks, stealing a private jet, skipping out on hotel bills and conning New York’s elite, Sorokin, 31, had spent just six weeks out of custody, following completion of her minimum four-year sentence in February 2021.

Then, last March, amid a bevy of media appearances, at a routine check-in at the U.S. Immigration and Customs Enforcement office in lower Manhattan, ICE authorities arrested her on charges of overstaying her visa.

From detention cells in New Jersey and at Orange County Correctional Facility in Goshen, New York, Sorokin, who was born in Russia but has family in Germany, fought her deportation for almost a year. Once, in a phone interview, she referred to deportation as feeling like “a big L on my end.”

But she lost her battle. By Monday afternoon, the texting app that allows for communication with inmates at the correctional facility noted that Sorokin had been released from its custody. Several friends who had spoken to her Monday morning confirmed her imminent deportation.

“I was chatting with her this morning,” said Blake Cummings, who ran her Instagram account while she was in detention. “She didn’t expect this.”

Her criminal defense lawyer, Todd Spodek, who had been aiding Sorokin with her immigration issues since she fired her immigration lawyer a few weeks ago, declined to comment.

An ICE spokesperson declined to answer questions regarding her imminent deportation but said by email that she was still technically in custody of the immigration authorities.

Sorokin had moved to Germany, where her family still lives, when she was 15. But a few years later, at 19, she struck out on her own to pursue a fashion degree in Paris.

By 2014, she had moved to New York, often living out of expensive hotels — and skipping out on the bill, according to evidence presented at her trial.

By her mid-20s, she was moving in Manhattan’s elite social circles — and although she said in an interview at the Rikers Island jail complex with The New York Times that she never actually told anyone she was a German heiress, that is what many people believed her to be.

Under the guise of creating the Anna Delvey Foundation, a private members-only arts club, she walked into banks with fake financial statements and asked for tens of millions of dollars for the project — and for a while, banks and hedge funds entertained her requests, according to prosecutors.

Her ploys ended in late 2017, when she was arrested after failing to pay a hotel lunch bill totaling about $200.

Days before Sorokin was released from the Orange County facility, even as she was quarantined for two days and tested for the coronavirus before her removal, she avoided any direct reference to the possibility of deportation. Instead, in texts over the weekend, she railed against the immigration system.

“The system is predatory: You’re set up for failure,” Sorokin said last month, noting that many of the people she was housed with could not afford legal representation and that lawyers are not provided to people free of charge in immigration cases.

She said she preferred her pretrial detention at Rikers, adding, “When I was at Rikers, there was a clear schedule: I always had a next court date.” But in ICE detention, she rarely knew if or when her next court date would be, she said.

Until the end, Sorokin was determined to stay in New York, where, she said, she had built her life. She worked on her appeal against her deportation, made guest appearances on podcasts, delved into her own book writing and documentary projects — and even watched part of the “Inventing Anna” series.

“I have a mln things in the works,” she texted from her cell last week. “Never a dull moment over here.”