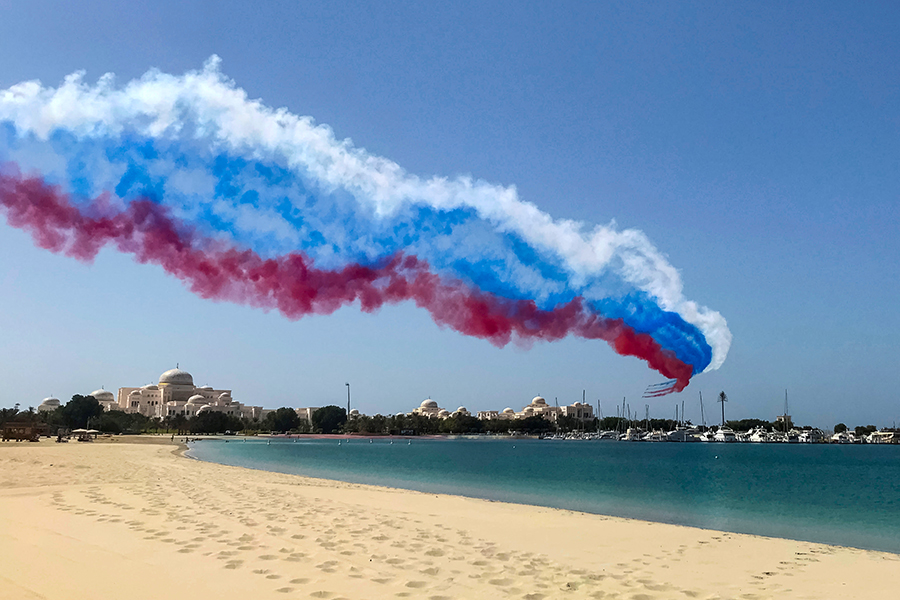 Stretching into the Persian Gulf from the beaches and skyscrapers of Dubai is a man-made archipelago in the shape of a vast palm tree, its branchlike rows of islands lined with luxury hotels, apartments and villas.

Among the owners of those homes are two dozen close allies of President Vladimir Putin of Russia, including a former provincial governor and nuclear power plant manager, a construction magnate and former senator, and a Belarusian tobacco tycoon.

At least 38 businessmen or officials linked to Putin own dozens of properties in Dubai collectively valued at more than $314 million, according to previously unreported data compiled by the nonprofit Center for Advanced Defense Studies. Six of those owners are under sanctions by the United States or the European Union, and another oligarch facing sanctions has a yacht moored there. For now, they can count themselves lucky.

Since the invasion of Ukraine, much of the world has imposed sweeping sanctions on Russian financial institutions and the circle around Putin, and even notoriously secretive banking centers like Switzerland, Monaco and the Cayman Islands have begun to cooperate with the freezing of accounts, seizing of mansions and impounding of yachts.

But not Dubai, the cosmopolitan resort and financial center in the United Arab Emirates. Although a close partner to Washington in Middle Eastern security matters, the oil-rich monarchy has in recent years also become a popular playground for the Russian rich, in part because of its reputation for asking few questions about the sources of foreign money. Now the Emirates may undercut some of the penalties on Russia by continuing to welcome targeted oligarchs.

“Sanctions are only as strong as the weakest link,” said Adam Smith, a lawyer and former adviser to the U.S. Treasury Department office that administers such measures. “Any financial center that is willing to do business when others are not could provide a leak in the dike and undermine the overall measures.”

The Emirati stance is exposing tensions between the U.S. and several of its closest Arab allies over their reluctance to oppose the Russian invasion. Asked for solidarity in a moment of crisis, the UAE, Saudi Arabia and Egypt have instead prioritized relations with Moscow — the Emirates and Saudi Arabia by rebuffing American pleas for increased oil supplies to soothe energy markets, Egypt by muffling criticism of the invasion while proceeding with a $25 billion loan from Russia to finance a nuclear power plant.

“It should be a clarifying moment,” said Michael Hanna, U.S. program director for the nonprofit International Crisis Group. “That has to be pretty bracing.”

The UAE may be the most conspicuous in its position, if only because it currently holds a rotating seat on the United Nations Security Council. The Emiratis abstained from a U.S.-backed resolution denouncing the invasion, declining to criticize Russia. And Emirati officials have reassured Russians that their authorities will not enforce sanctions unless mandated by the U.N. — where Moscow’s veto ensures against it.

“If we are not violating any international laws, then nobody should blame Dubai, or the UAE, or any other country for trying to accommodate whoever comes in a legitimate way,” said Abdulkhaleq Abdulla, a political analyst close to the UAE’s rulers. “So what’s the big deal? I don’t see why the West would complain.”

Russians in Dubai say they appreciate the hospitality. “Having a Russian passport or Russian money now is very toxic — no one wants to accept you, except places like Dubai,” said a Russian businessman who took refuge there, speaking on the condition of anonymity for fear of alienating Emirati authorities. “There’s no issue with being a Russian in Dubai.”

The Center for Advanced Defense Studies, a Washington-based nonprofit that collects data on global conflicts, found that Putin allies owned at least 76 properties in Dubai, either directly or under the name of a close relative, and said that there were likely many others who could not be identified.

The center’s list of those under sanctions includes: Alexander Borodai, a Duma member who acted as prime minister of a Ukrainian province in 2014 when it was taken over by Russian-backed separatists; Bekkhan Agaev, a Duma member whose family owns a petroleum company; and Aliaksey Aleksin, the Belarusian tobacco titan. A handful of oligarchs on the list own homes valued at more than $25 million each.

Maritime records show that in recent days the yacht belonging to sanctioned oligarch Andrei Skoch, a steel magnate and Duma member, has been moored off Dubai.

A Bombardier business jet owned by Arkady Rotenberg, another Russian billionaire under sanctions, landed Friday, and the planes and boats of other oligarchs discussed as possible targets have been coming and going, too. The yachts of at least three other oligarchs are currently docked in Dubai. The 220-foot vessel of a Russian metals magnate appears to be en route from the Seychelles. The Boeing 787 Dreamliner owned by Roman Abramovich, the Russian-born owner of Britain’s Chelsea soccer team, took off from the airport Friday. A 460-foot superyacht belonging to another oligarch set sail the same day; he was added to Europe’s sanctions list Wednesday.

Moscow has been quietly building closer ties to the UAE and other Western-leaning Arab states for a decade, seeking to capitalize on complaints about Washington.

The autocrats who dominate the region were outraged by Washington’s statements of support for the Arab uprisings in 2011. The Arab monarchs of the Persian Gulf cried betrayal at the Obama administration’s deal with their adversary Iran over its nuclear program. Their frustration only grew when the Trump administration did nothing to retaliate for a series of apparent Iranian attacks against them.

Now people close to those rulers say that their neutral responses to the invasion of Ukraine should teach Washington not to take them for granted.

“The automatic expectation in D.C. is that ‘you Saudis now must jump on the bandwagon and isolate Russia as we have,’” said Ali Shihabi, a Saudi political analyst close to the royal court, but the kingdom cannot “burn” its relationship with Russia just to please the White House.

Others noted that the Kremlin had overlooked human rights abuses that Washington often criticized, and that relations with an alternative power gave the Arab states more leverage. “It’s useful for Arab countries to take this stance,” said Mustapha Al-Sayyid, a political-science professor at Cairo University.

Russia has sold weapons to all three countries, and a few Saudi military officers have begun training in Russia. Egypt and the UAE have cooperated with Russia for several years in Libya, where all three have backed the same strongman in Eastern Libya in his conflict with the U.N.-backed government. Egypt provided bases near the border, the UAE sent fighter planes and Russia deployed mercenaries.

Crown Prince Mohammed bin Zayed, the de facto ruler of the UAE, visited Moscow at least six times between 2013 and 2018. When Putin visited the Emirati capital, Abu Dhabi, the next year, the city lit up landmarks in Russian colors and repainted its police cars with Russian banners and Cyrillic script.

Other entanglements bind their interests, too, including the ongoing civil war in Yemen pitting partisans backed by Saudi Arabia and the UAE against others favored by Iran.

During a U.N. Security Council session last week, Russia unexpectedly supported an Emirati resolution to label the Iranian-backed fighters “terrorists.” Analysts sympathetic to the UAE argued that it had won Moscow’s backing in part by abstaining from the resolution denouncing the Ukraine invasion.

Russia, though, has also used financial ties to pull the Gulf Arabs closer, partly through its state-controlled Russian Direct Investment Fund and its CEO, Kirill Dmitriev, who last week was added to the sanctions list.

Rich Russians, though, have reasons other than geopolitics to buy property in Dubai. The sheikhs who ruled the city-state have long sought to attract business by allowing a high degree of secrecy about asset ownership and by sharing only limited information with other jurisdictions, said Maíra Martini, a researcher with Transparency International, which campaigns against corruption.

“Dubai has been a key player in most of the big corruption or money-laundering schemes in recent years,” she said, citing recent scandals involving Russian businessmen, the daughter of Angola’s former president, top Namibian fishing regulators and South Africa’s Gupta family.

Citing such failings, the Financial Action Task Force, an influential money-laundering watchdog, on Friday put the UAE on its “gray” list.

Emirati officials, seeking to get off the money-laundering “gray” list, are already pledging new transparency measures. Those steps could also limit the ability of sanctioned oligarchs to hide assets or move money in Dubai.

Cutting some Russian institutions off the international system for electronic bank transfers, called SWIFT, has already made it harder for them to do business with Dubai. And if Washington threatens to restrict Emirati access to the U.S. financial system — as during the early years of the Iran sanctions — that could motivate the Emiratis to cooperate more.

Still, Washington often weighs its partnerships in military and intelligence matters against other priorities, including the enforcement of sanctions.

“The question,” said David Laufman, a lawyer who previously worked as a senior official in the national security division of the Justice Department, “is going to be how hard the Biden administration leans on the UAE to get with the program.”

Maharashtra: Child throws balloon at scooter rider, scooter collides with cycle, one dead
Many women were sitting in a veil wearing the same type of sari, the little child recognized the mot...
You will see these celebrities including pop icon Usha Uthup on the fifth day of Jaipur Literature F...
Previous Post

Forbes India – War For Talent Has Never Been So Fierce Before: Varun Berry

Forbes India - War For Talent Has Never Been So Fierce Before: Varun Berry