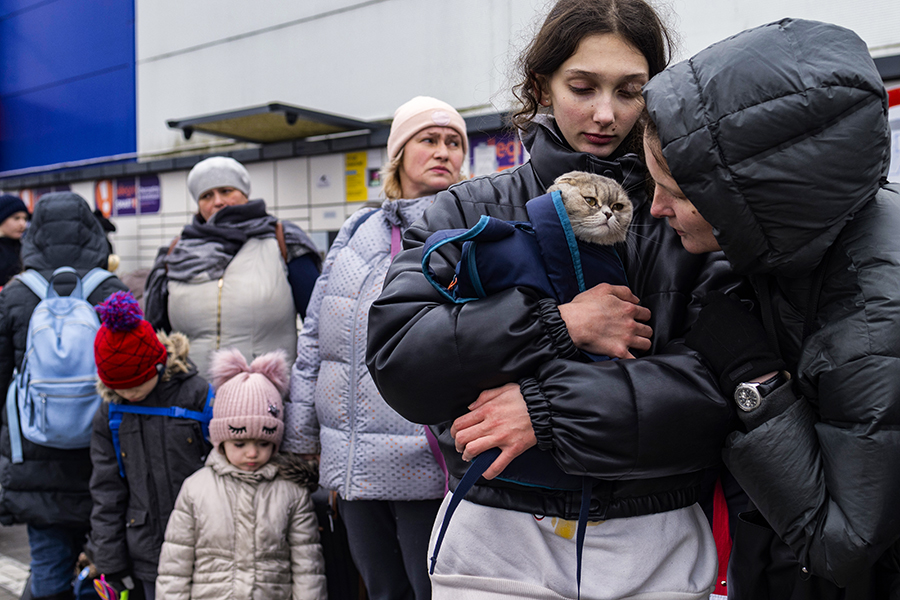 Sofia and Svetlana Klimienko, who fled the fighting in Kharkiv, Ukraine, huddle with their car Amelie after arriving in Przemysl, Poland, on Monday, March 7, 2022. Kharkiv is close to the border with Russia, and as one of the first targets of the Russian invading forces, it has come under some of the heaviest bombardment of the war so far.
Image: Maciek Nabrdalik/The New York Times

MYKOLAIV, Ukraine — Increasingly indiscriminate Russian shelling that has trapped and traumatized Ukrainian civilians magnified fears Monday of an intensifying humanitarian crisis that has already left tens of thousands without food, water, power or heat in besieged cities of southern Ukraine and elsewhere.

As hopes for even brief cease-fires flare and then just as quickly sputter, the Russian invasion, the biggest conflict to engulf Europe since World War II, has turned at least 1.7 million Ukrainians — half of them children — into refugees, according to the United Nations. Many are trapped in their own cities, pinned down by intense barrages from Russian forces.

In Mariupol, a southeast port in Moscow’s crosshairs, desperate residents have gone for days without food, water and other essentials. And in the city of Mykolaiv, residents fled their beds for safety Monday when stymied Russian forces launched a deadly predawn barrage at a military barracks.

“They attacked our city dishonorably, cynically, while people were sleeping,” Vataliy Kim, the governor of the Mykolaiv region, said in a Facebook posting.

With a third round of negotiations between Ukraine and Russia ending inconclusively Monday, the fighting raged on. Late in the evening, the commander in chief of Ukraine’s military, Valery Zaluzhnyy, said warplanes and an anti-aircraft missile had downed two Russian planes near Kyiv, the capital. Several large explosions were heard in Kyiv, but it was not immediately possible to confirm the commander’s account.
Although it is often hard to verify the competing claims of success on the battlefield, there is general agreement that Russia’s military has failed to take any major city in its effort to subdue the Western-leaning country that President Vladimir Putin has vowed to subjugate.

Though many times larger than their adversary and enjoying more advanced weapons and air superiority, Russian forces have become bogged down just about everywhere, struggling with logistical problems, apparent poor troop morale and tactical errors that Ukrainian troops have exploited. 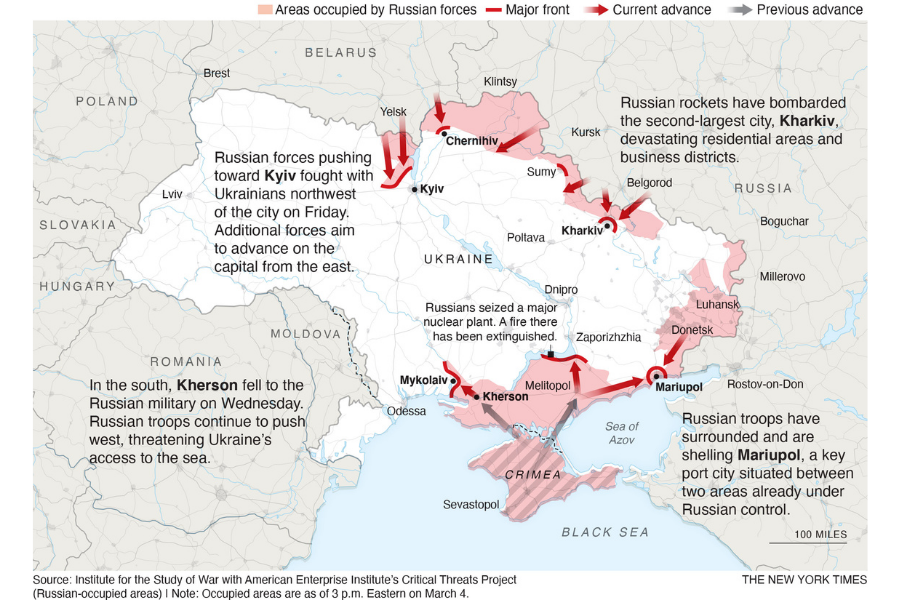 A look at areas under Russian control, and major battlefronts, during Russia’s invasion of Ukraine as of the night of March 4.

Unable to make major military gains, the Russians are carrying out a campaign of indiscriminate bombing that is terrorizing the residents of Ukrainian cities and villages.

In Mariupol, Anton Gerashchenko, an adviser to the Ukrainian government, said the city did not have medicine, heat or a functioning water system. Attempts to distribute supplies and help people evacuate were scrapped over the weekend in the face of Russian bombardment. 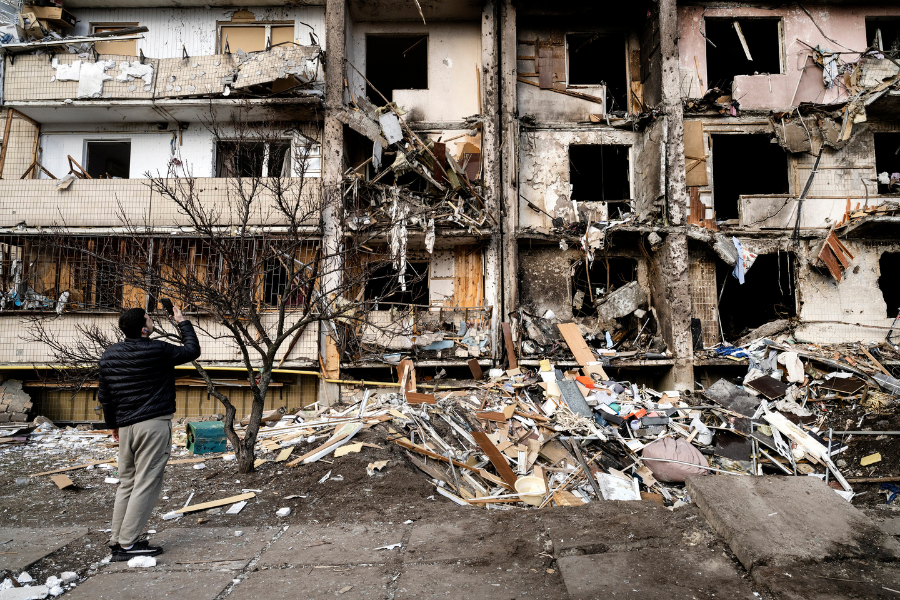 Ukrainians survey debris after a residential building was hit by missiles in the country’s capital of Kyiv, Feb. 25, 2022. As Ukrainians deal with the devastation of the Russian attacks in their homeland, many are also encountering a confounding and almost surreal backlash from family members in Russia, who refuse to believe that Russian soldiers could bomb innocent people, or even that a war is taking place at all.
Image: Lynsey Addario/The New York Times

Doctors Without Borders, a medical charity that works in conflict zones, said it had received “harrowing reports” from staff members trapped in Mariupol. “Safe passage for those willing and able to escape should be urgently assured in Mariupol and across war affected areas inside Ukraine,” the group said in a statement.

Officials at the United Nations, which so far has been powerless to stop the war, pleaded for combatants to pause long enough for trapped civilians to leave conflict zones. “Reliable and predictable ‘windows of silence’ and ‘safe passage’ are urgently needed to relocate people whose lives are at risk,” said Amin Awad, the U.N. crisis coordinator for Ukraine.

On Monday, the Kremlin offered an evacuation plan of its own, galling Ukrainian leaders. Ukrainian civilians, it said, should be taken to Russia — that is, to the invader — or to its ally Belarus. Ukrainian officials denounced the proposal as propaganda, and said it was meant to distract attention from the Russian shelling of areas where civilians are trying to flee.

The heavy Western economic sanctions slapped on Russia in response to the invasion threatened to grow even more intense Monday as American lawmakers advanced a bipartisan measure to suspend normal trade relations with Moscow and ban U.S. purchases of Russian oil.

The mere possibility of such action, which could severely restrict a crucial Russian export, sent global oil prices above $119 a barrel, the highest in 14 years, and helped push average gasoline prices above $4 a gallon in the United States. The stock market had its worst day since October 2020.

With Putin demonstrating resolve to impose Soviet-style suppression to control the narrative of the war at home, most signs pointed to a worsening conflict that risks spilling into Ukraine’s NATO alliance neighbors. That development would pose an extreme test for U.S. President Joe Biden and could put the United States and Russia, which have the world’s biggest nuclear weapons arsenals, on a trajectory toward direct combat.

“Don’t talk to me about half full/half empty: I’m someone who’s generally happy there’s water in the glass,” Ian Bremmer, president of the Eurasia Group, a political risk research organization, said in a newsletter to readers and clients about the Ukraine crisis. “But I’m decidedly worried about where the conflict with Russia is heading.”

Ukrainian President Volodymyr Zelenskyy, who has outmaneuvered Russian attempts to portray him as weak and intimidated, said he expected more heavy shelling of Ukrainian cities in the coming days. Already, said one of his advisers, Mykhailo Podoliak, 202 schools, 34 hospitals and more than 1,500 residential buildings have been destroyed since the war began. Nearly 1,000 towns and villages have been completely deprived of light, water and heat, he said.

Zelenskyy spoke from his office in Kyiv on Monday night, the first time he had been seen there since the Russian invasion began Feb. 24. In a video posted on Facebook, he said he was not in hiding and not afraid of anyone.

In Mykolaiv, a southern city that lies directly in the path of Russian forces driving toward Odesa, the famed Black Sea port, the invading army unleashed a ferocious artillery attack early Monday that struck residential neighborhoods with rockets and sent streams of people running for safety. 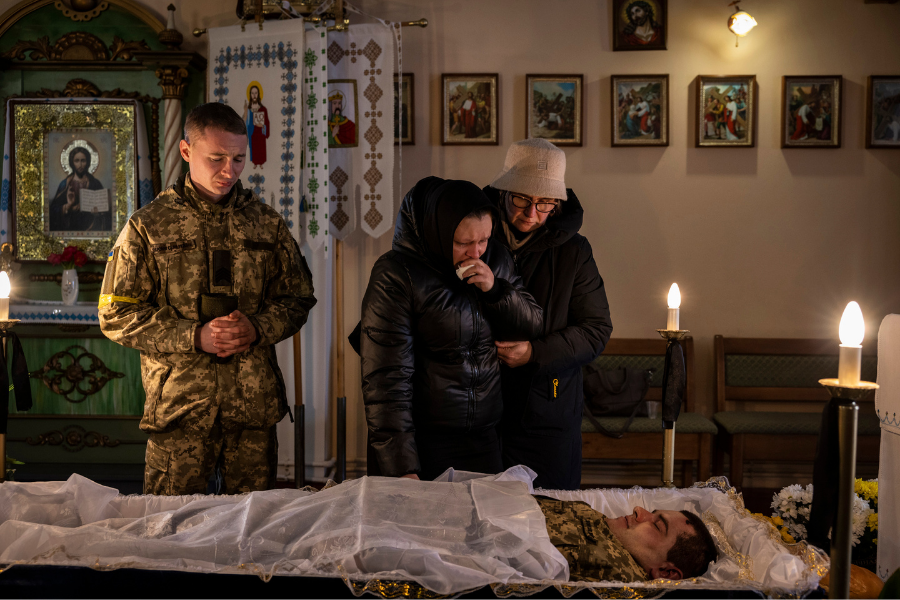 About 5 a.m., the city awoke to a barrage that lit the predawn sky. Residents sheltered in basements and truckloads of Ukrainian troops rushed to the east of the city, where the fighting appeared to be heaviest. At one point during the day, a fierce tank battle erupted between Russian forces and Ukrainian troops defending Mykolaiv’s airport, with blasts that reverberated throughout the city.

The initial attack killed at least eight Ukrainian soldiers. who were sleeping in their barracks when they were struck by a Kalibr cruise missile, said Kim, the Mykolaiv region’s governor. Another 19 were wounded and eight were still unaccounted for, he said.

By evening, the guns had died down, and Ukrainian officials declared that their forces had once again repelled the Russian onslaught.

“They are retreating and running away,” Kim said, although this could not be independently verified. “Nothing remains of their tanks, as far as I understand.”

He said a group of about 20 Russian soldiers had fled into the forest, and he urged residents to call the police should they encounter them.

Although the most intense shelling of the day in Mykolaiv occurred at frontline positions, rockets also rained down on civilian neighborhoods.

Several landed in dense apartment blocks in the far east of the city, shattering windows and sending shrapnel through walls and home appliances. There were no immediate reports of injuries, but residents were shaken, often invoking Putin’s name with a torrent of profanity.

“Tell Putin that he is killing peaceful people,” Olga Korolyova, 48, said through sobs as she stood in the kitchen of her broken home. 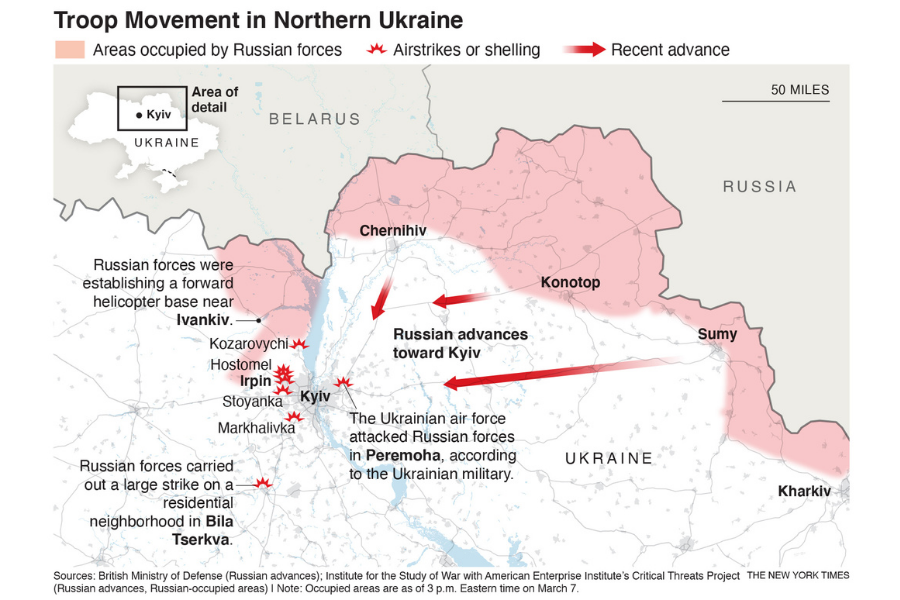 Two weeks after the invasion began, tens of thousands of Ukrainians are without food, water or power. The Russians are increasingly resorting to indiscriminate shelling to help their forces advance

The glass had been blown out of Korolyova’s front window and her front door had been destroyed. When the rockets struck, she said, she hid in her bathroom.

“He thinks that we are to submit to him?” she said of the Russian president. “I want him to go through what I went through this morning.”

Viktor Voroboi had just returned to his bed after an early-morning cigarette on his balcony when a rocket hit, blowing out the balcony glass and showering him with debris. A day before, he had moved his mother into his apartment after her own neighborhood was bombed. Neither of them was injured Monday.

“I was lucky,” Voroboi said, his voice still shaking. “It means an angel is protecting me.”

Residents of an apartment block sheltered in a basement that normally serves as a gym; the sound of artillery fire shook the walls. One of them, Margarita Andreyeva, accused Russia of tarnishing what she described as a sacred victory over the Nazis in World War II, when the Ukrainians and the Russians fought together.

“Now, Germany is giving us weapons to defend ourselves from the Russians,” she said. “This is absurd. What would our grandfathers think?”