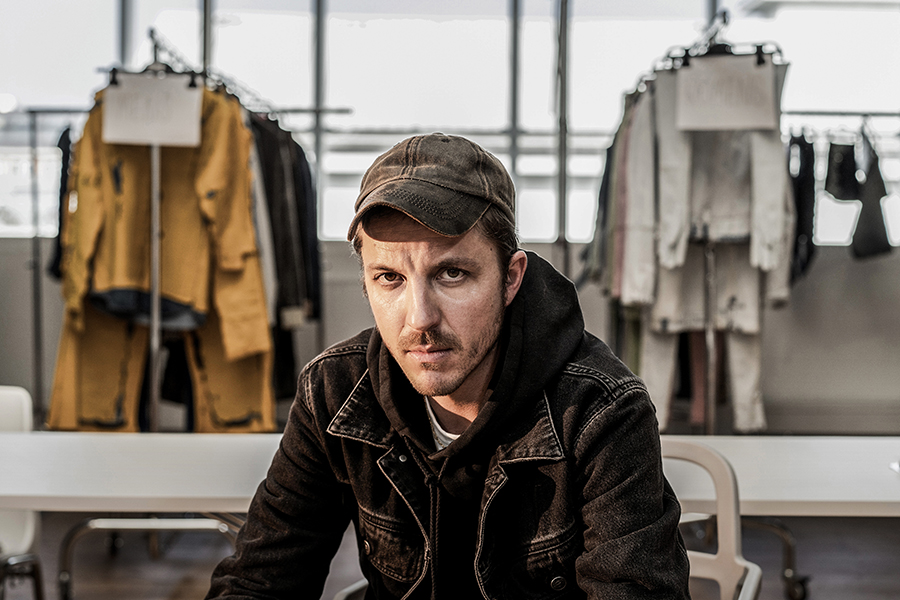 Every chair in the cavernous warehouse space, which was arrayed with giant inflatable denim-bedecked bombshells and grease monkeys, was full. Some attendees seemed to have come straight from the airport. Tim Blanks, the critic of Business of Fashion, was at the show for the “first time in years.” Ditto editor and curator Stefano Tonchi. Julia Fox, the celebrity magnet of the moment, was front row. Renzo Rosso, mogul, owner of Only the Brave, one of the few Italian conglomerates, was presiding, a giant smile on his face.

All there to see the new Diesel collection.

Diesel, the onetime rock ’n’ roll jeans brand now designed by Glenn Martens.
It was the third leg of a trifecta of shows by Martens since the start of the year that together have catapulted him from niche conceptualist, beloved of high-minded industry insiders, fashion freaks and art school students, to the status of first great designer of 2022.
On Jan. 19, there was a joint men’s and women’s show for Y/Project, the cult French brand he took over in 2013, featuring net tank tops and skirts and trousers silk-screened with male and female torsos and groins matched up seemingly randomly, in a not-so-random commentary on the wider conversation around gender and identity.

The following week came his first-ever couture collection as the guest designer for Jean Paul Gaultier, complete with ballgowns so voluminous they resembled frothing seas and mermaid dresses made from shredded strips of silk ribbon, like a never-ending corset.

Then, three weeks after that, came Diesel, with its 1,000 forms of denim: tufted, frayed, collaged, chromed, recycled, reinvented.

Martens is not the first designer to try his hands at multiple brands simultaneously (currently Jonathan Anderson with JW Anderson and Loewe and Raf Simons with his own brand and Prada are among those doing double duty), but he may be the first to embrace such seemingly disparate houses to equal acclaim.

Watching the Diesel show “brought me to tears,” Rosso said afterward. “His treatment of denim is something we’ve never seen before.”

He is, Tonchi said, “not afraid of anything.”

When Martens was named president of the fashion jury for the 37th edition of the Hyères International Festival of Fashion and Photography, the Cannes Film Festival of fashion prizes, his metamorphosis from genius weirdo into industry Olympian seemed complete.

But now that everyone is finally watching, what does he do next?

Too weird, too much

“We never preached that we’re going to make beautiful silhouettes,” Martens, 38, said a few weeks before the Diesel show. “A lot of what we do is for the sake of pushing limits, and a lot of people in the past were like, ‘Why?’” He was talking about Y/Project and Zooming in via video from his Y/Project office in Paris.

He was wearing his usual uniform: an old black sweater he had bought from an outlet in London, black denim jeans and a faded baseball cap. He had two chains around his neck, a hoop earring in his ear and two rings on his fingers, and he was half shaven.

Y/Project, he said, “existed for so many years to do this experimental design and quirky things and nobody cared. It was too weird, it was all too much. They were having a stroke after the third look.” Even the staff, he said, often had “a moment in a fitting when we’re looking at our design and thinking, ‘Are we seriously going to do this?’”

You get the sense that when that question is asked is exactly when Martens thinks he is on the right track. 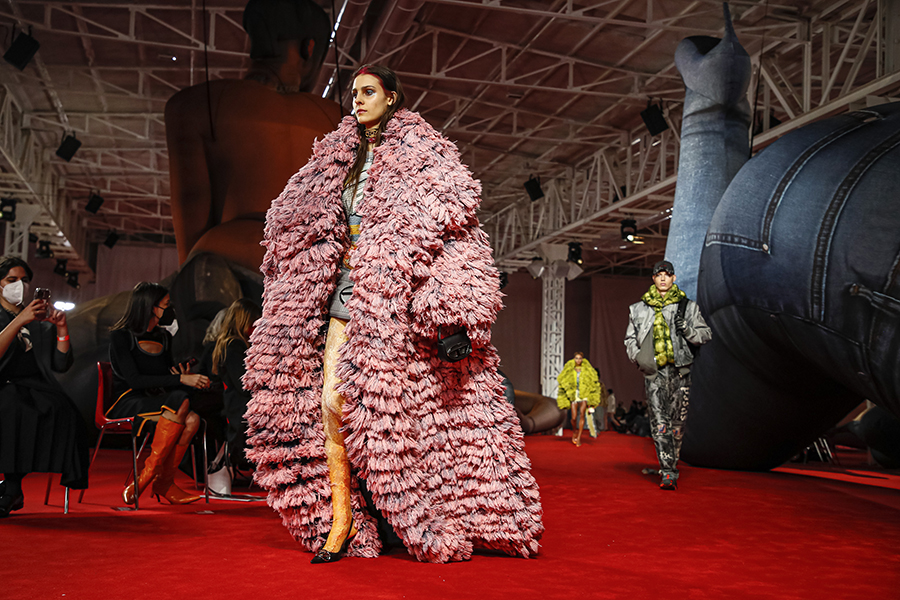 Started in 2010 by designer Yohan Serfaty, Y/Project was initially known for its dark and moody menswear. When Serfaty died only three years after the label was introduced, his business partner, Gilles Elalouf, asked the Chambre Syndicale, the governing body of French fashion, who it would recommend to take over.

“I was the cheapest,” Martens said.

He was also trained at the fashion academy in Antwerp, where after a rough start — “I was always on the verge of failing,” he said — he graduated first in his class, snagging a job with Gaultier before eventually starting his own label.

“I was a very bad assistant,” Martens said. “I have no patience. I don’t want to listen to people. I always think I can do something better or different.”

When Y/Project came around, he closed his label, started the women’s line and ran it like a thought experiment. Each season begins with the design staff sitting around a table tossing out ideas and sketches for how they can mess with the way clothes are made. How they can play with multiple lapels on one garment so it looks like a few different jackets in one; slice jeans at the upper thigh and then reattach them so they resemble garter belts, or diapers; use wire to transform hems and lapels into endlessly fungible sculptures.

The results are smart and don’t look like anything else, and they’re often funny — the kind of garments that cause double takes and send High Fashion Twitter into a tizzy. But Y/Project is also the sort of brand with an influence inside fashion (and on other designers) that far outweighs its external sales.

In 2020, for example, when Rihanna and Celine Dion had both appeared in the cutout pants, Y/Project still had revenue somewhere between the single and double digit millions. All of which might normally make him an unexpected candidate for a mass-appeal brand like Diesel, which led its parent company, OTB, to post more than $1 billion in sales in 2021.

Nevertheless, Rosso, who had met Martens when Y/Project won the Andam, the leading French fashion prize, in 2017 (Rosso was a jury member) and later worked with him on a Diesel capsule project, wasn’t the only big-brand mogul who saw potential in his rare combination of irreverent attitude and couture mind.

Martens said he was in discussion at different points to work with Donatella Versace at Versace (this was during her very public secret search for an heir, which ended inconclusively when the brand was sold to Capri Holdings, which owns Michael Kors) and Kenzo. He also said he didn’t agree to the Diesel job until Rosso expanded it to include the entire creative side: clothing, licensing, marketing and store design.

In Martens’ mind, Diesel serves a different purpose than Y/Project. “Diesel is much more social,” he said. “This is the only way I can talk to so many people.” Whether or not people buy the clothes, they are, he said, “following you and paying attention to you.” For him, the decision to sign on was personal. 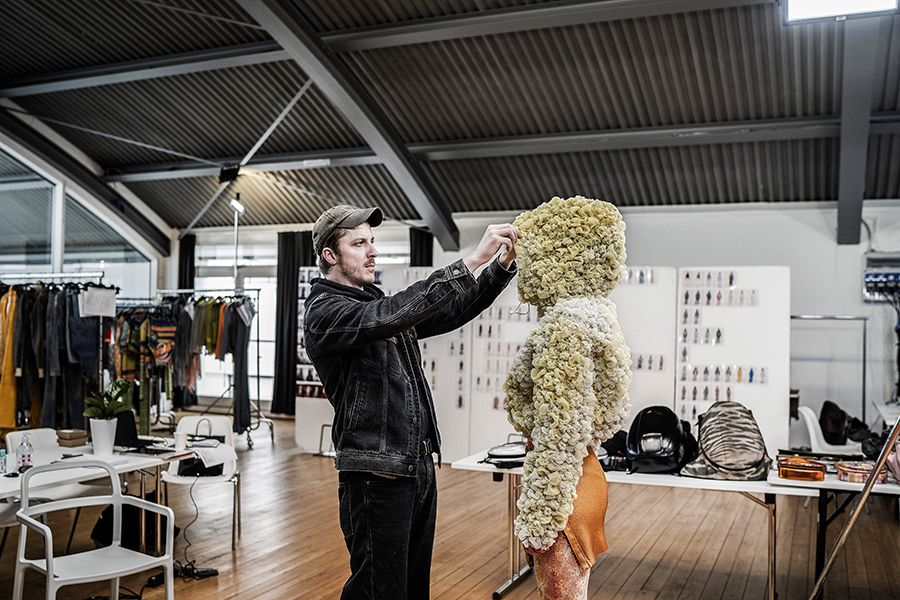 “My mother, who’s a nurse, doesn’t get Y/Project at all,” Martens said. She raised him and his older brother as a single parent in Bruges, Belgium, working weekends as a cleaning lady. Her parents, who helped take care of the boys, both came from military families and were, he said “very strict.” His father wasn’t much in the picture, though his father was a sculptor who worked with mirrors and made stained-glass windows, which is where Martens thinks he may have gotten his interest in design.

His mother “thinks I’m mental,” he continued. “When she sees the Y/Project clothes, she’s like, ‘Who is going to wear this?’ My older brother, who’s a fireman, has no understanding of Y/Project. But my brother does buy Diesel.”

Also, Martens said he remembered Diesel ads from his childhood, especially the campaign that involved two men kissing. “It might have been the very first time I saw something like that,” he said. “It helps people — definitely helped me.”
He sees the brand as a sort of fashion Trojan horse that can seed sustainability: environmental and social. (He has been focused on responsible fashion since helping his former teacher Bruno Pieters start Honest By in 2012, a brand that was known for publishing all the sourcing information and price markups for every garment.) He has created the Diesel Library, which includes only evergreen styles made with environmentally responsible materials and treatments that come with QR codes on the label to explain the sourcing, as well as a program to use leftover scrap from the factories as store window installations. Scrap is also recycled into new denim, which is known as “rehab denim.”

And he said, “it’s quite nice to make garments you think are good, that make people feel good and comfortable and like they are going to nail life.”

The definition of success

Martens normally spends two days a week in Paris at Y/Project and three at Diesel in Italy.
He said he doesn’t find it difficult to balance the two, though when the Gaultier guest gig was added to the schedule, things got a little hectic. For the first two months of the year, he had only one weekend off. He went camping, which is what he does to relax rather than go to concerts or art exhibitions — though he also likes scoping out historic palaces.

“I was very spartan — work, sleep, work, sleep,” he said. “Maybe a glass of red wine.” He calls himself “a specialist with leftovers.” He is currently single and has no pets, which makes it easier to devote so much time to his jobs. So does the fact that the rest of the world has finally woken up to what he can do.

Sales of Y/Project have increased exponentially during the pandemic. “It’s finally our moment,” he said. “Now people get it, so we can finally grow.”

But not too much. “At a certain point, if you start doing the whole thing of pre-collections and so on, you start to lose a bit your message,” he said. He turned around and went to close his door because, he said, his staff was laughing at him.

Still, he has high hopes that a new bag — the wire bag, which can be squished into all sorts of different shapes — will hit the accessory jackpot. “Everyone can get good raises and have apartments and a joyful life and go on holidays wherever they want,” he said. He has no interest in reviving his own brand and seeing his name over the door; Y/Project gives him all the freedom he needs, and Diesel all the reach. Though that couture experiment was kind of satisfying.

“A lot of people thought of me as a very quirky designer, and I was a little marginalized because of that,” Martens said. “Which is fine, I really didn’t care. But now, having these three platforms, I can prove to people I also understand what the market wants and where to push and not to push.”

He gave a sort of sly little smile. “I always felt I could do it,” he said.

Forbes India - Volvo XC90: On The Move
Forbes India - Storyboard18 - What Is The Brand Power Of An Alma Mater?
Temperature rises in Delhi-Punjab-Rajasthan, heat in Jammu and Kashmir, Uttarakhand too
Previous Post

Forbes India – ‘The Batman’ And Matt Reeves: Emerging From The Shadow Of Other Caped Crusaders

Forbes India – Long Overlooked, Female Art Dealers Are Coming Out Of The Shadows

Forbes India - Long Overlooked, Female Art Dealers Are Coming Out Of The Shadows