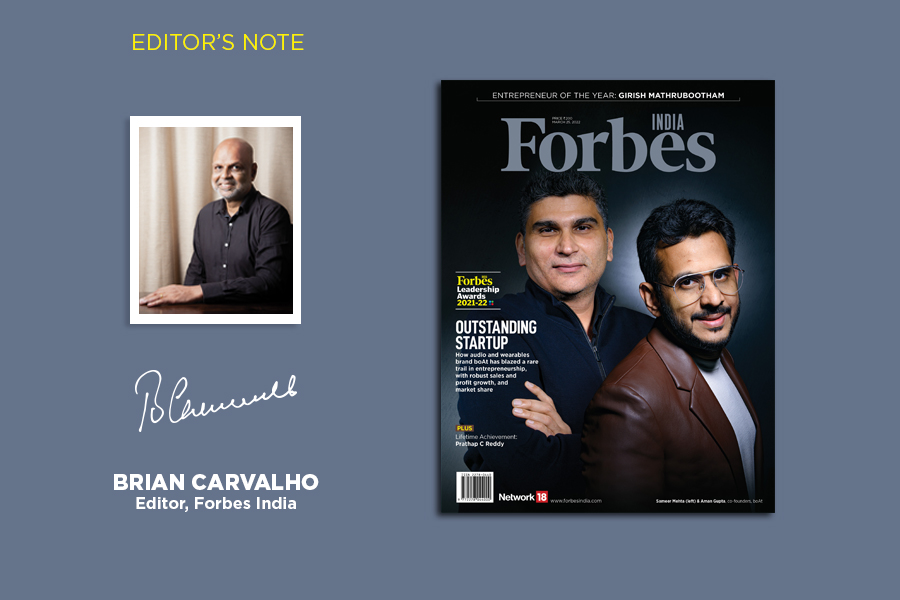 Russia’s invasion of Ukraine last fortnight brought to the fore, among many things, a few perceptions and myths about leaders and leadership. Vladimir Putin is for many the marauding ‘strong leader’, with reckless and evil designs on a helpless neighbour. A section of columnists was quick to paint US President Joe Biden as the ‘weak leader’ for being unable to effectively intervene.

The idea here is not to get into the complex geopolitics of the situation and justify either Putin’s aggression or the West’s arguably tepid retaliation. Rather, the effort here is to explore the myth of strong (and weak) leadership—and not necessarily of the political variety.

This is, after all, Forbes India’s annual issue on leadership, in which we honour the best leaders—from entrepreneurs to professional head honchos—on the domestic business landscape. The Forbes India Leadership Awards (FILA) is a celebration of leaders who were able to redefine and/or transform their businesses during a crisis—a pandemic.

To be sure, ‘redefining’ and ‘transformational’ leaders may be more effective than those we tend to refer to as ‘strong’—that’s how Archie Brown, author of The Myth of the Strong Leader (2014, Penguin Random House), sees it. Brown’s universe is largely political, but a lot of what he writes is applicable to leadership in other areas, from business to sports.

A strong leader, as Brown sets the context, “is generally taken to mean a leader who concentrates a lot of power in his or her hands… Placing great power in the hands of one person is inappropriate in a democracy, and it would be an unusually lacklustre government in which one individual was best qualified… to have the last word on everything”.

Now substitute ‘democracy’ with ‘company’ and ‘government’ with ‘board of directors’ (not an unreasonable licence to use), and what Brown is essentially saying is that it is just not possible for one individual (the leader) to adjudicate in all areas of business performance.

Brown also points to the limitations of what many consider the Real McCoy: The inspirational or charismatic leader. Yes, they may have their utility, particularly in times of crisis, but they are “often dangerous and frequently overrated”. For every Martin Luther King Jr, there is an Adolf Hitler.

Leadership is also contextual: Leadership styles differ in war and peace, and in a crisis as compared with calmer times, contends Brown. Perhaps, then, a once-in-a-century pandemic may have also called for leadership of a kind that is different from an ‘all is well’ phase.

The most effective, and the rarest breed, is that of the transformational kind. Such leaders are rare in democracies as such profound systemic change is often gradual, over the span of more than one leader. At companies, though, founders and CEOs are perhaps better placed to bring about fundamental change in the early stages of the entity.

Forbes India’s Entrepreneur of the Year Girish Mathrubootham is one such leader who has played a decisive role in transforming a little-known Chennai fledgling into a Nasdaq-listed Silicon Valley software products major to be reckoned with on the global stage. That Mathrubootham swears by collective rather than individual leadership is the faith he has in his top team and his employees. As he told Harichandan Arakali: “Believing in employees is the No. 1 thing.”

The Forbes India cover is testimony that leadership isn’t always about one person at the helm—particularly in the tech startup world. Don’t miss Kathakali Chanda’s profile of audio and wearables startup boAt that has blazed a rare trail in the universe of new-age companies.

Big decision of Telangana government, half day classes will run in all schools from March 15, know t...
Nepal PM expresses gratitude to India for evacuation of Nepalese citizens from Ukraine
G23 leaders meeting, Congress leaders can meet Sonia on the proposal of collective leadership
Previous Post