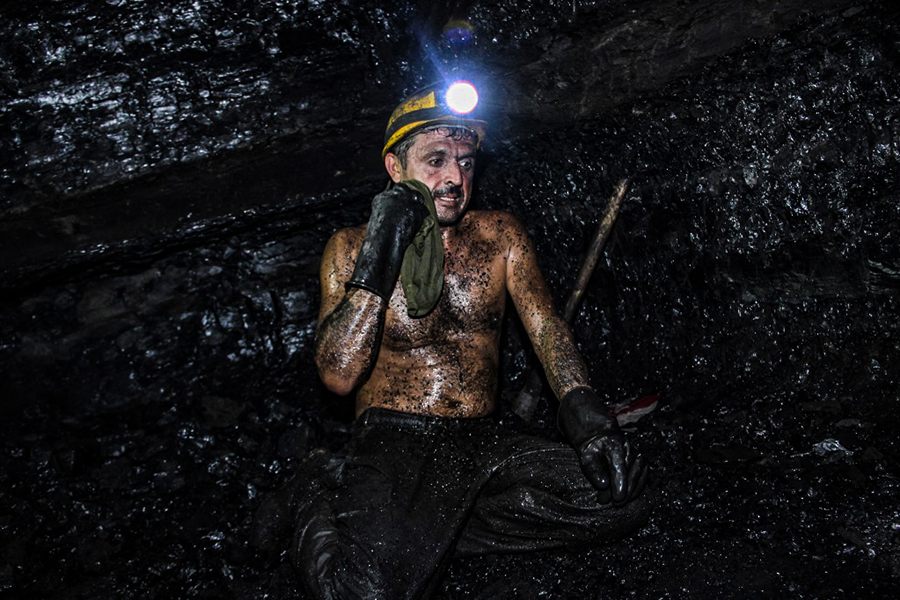 A miner works to extract coal from the Los Parras mine in Lobatera, Tachira state, Venezuela, on March 3, 2022. – Artisanal coal mines in Venezuela have precarious conditions, with little oxygen and low salaries. (Credit: Jhonny PARRA / AFP)

San Cristobal, Venezuela: Henry Alviarez says he began small-scale coal mining in Venezuela’s western Tachira state out of “necessity” due to the country’s ongoing economic crisis which has deepened during the coronavirus pandemic.

He leaves home early in the morning on motorbike for the 45-minute journey to the Los Parra mine in Lobatera, near the border with Colombia.

The Andean town has 50 small-scale mines run by 22 cooperatives, each made up of eight to 10 workers who earn no more than $120 a month.

From Lobatera, the mined coal is moved via clandestine routes over the border to Colombia or the neighboring Merida state to be used primarily for generating electricity.

The lack of oxygen deep inside the mines and little emergency equipment, makes for precarious and “exhausting” work conditions, says Alviarez.

“There are many blacksmiths and mechanics here but we cannot work in those” professions, he adds, citing the unprecedented economic crisis that has plunged Venezuela into an eight-year recession and four years of hyperinflation.

Bare-chested, pickaxe in hand, and helmet with a torch on his head, Alviarez quickly becomes covered in a mixture of sweat and black streaks.

He tries in vain to wipe off the coal marks with a green cloth.

All three of his children have left the country, one each to Chile, Colombia and Ecuador.

“Thank goodness they’ve left,” he said, adding that their only options in Lobatera would have been to join him in the mines.

“Who would want to work here?”

Around 500 families rely on the Lobatera mines, which are located in a mountainous area only accessible by dirt roads.

Temperatures in the area can soar, with the mining pit often the only shelter from the sun.

“It’s a pretty risky job because we have to use a lot of wood” to hold up the tunnels “and pray to God,” said Jose Alberto Trejo, 38, who used to work in construction before subsequently finding employment in Colombian mines due to the lack of job opportunities.

Fears of being ‘left out’

On average, each miner in Los Parra can extract one ton a day, although there is no reliable data on the total production from the 50 mines in Lobatera.

“The price of coal is low and has fallen over the years, which makes it tougher to work these days,” said Pablo Jose Vivas, 61.

The miners take their hauls to the mine director who sells it on for $50 a ton.

The profits are shared out between the members of the cooperative.

Vivas, who has worked in mining for more than 20 years, picks up a piece of mined rock and holds it between his blackened fingers.

The rock shines in the torchlight that gives it a purple hue, like a precious stone.

The miners work in teams. One smashes the rocks with a pickaxe, another fills the wheelbarrow and a third carts it out of the mine.

Outside, several small piles of coal await the arrival of a truck.

Tachira governor Freddy Bernal, a loyalist of President Nicolas Maduro, is hoping to encourage foreign investment in Lobatera from Venezuela’s allies Russia, China or even India.

“That would generate many jobs and a significant economic impact,” he said, adding that it would ensure families who have subsisted on mining for more than 40 years would not be left destitute.

But the miners are far from convinced.

“That would end the basic job because they would arrive with new technologies that we don’t know how to use,” said Vivas.

“Many of us would be left out.”

PM praised ‘Kashmir Files’, said- the truth was shown in the film which was suppressed for years