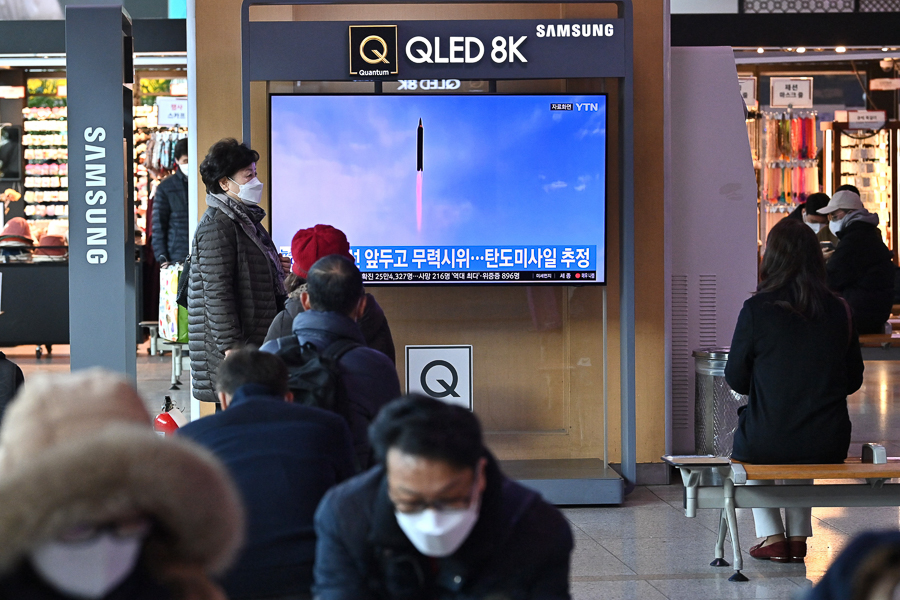 People watch a television screen showing a news broadcast with file footage of a North Korean missile test, at a railway station in Seoul on March 5, 2022, after North Korea fired at least one “unidentified projectile” in the country’s ninth suspected weapons test this year according to the South’s military.
Image: Jung Yeon-je / AFP via Getty Images

WASHINGTON — The White House on Thursday said that North Korea had begun testing a new intercontinental ballistic missile in recent days and that American forces were putting their missile defense units in Asia in a state of “enhanced readiness” for what they expect will be another launch intended to demonstrate the range of the new missile.

In a briefing Thursday, a senior American official told reporters that in a departure from the past, North Korea had tried to hide the nature of the tests, both of which have taken place during the Russian invasion of Ukraine. They identified the missile as the same one that the North had rolled through Pyongyang in October 2020. But until recently, it had not been tested.

It is not clear whether the tests were timed by Kim Jong Un, the North Korean leader, to come at a time of maximum distraction in Washington and fear of a broader war in Europe. Whatever the reason, the emergence of a new intercontinental missile, ultimately intended to show that North Korea could reach American cities, adds to the list of simultaneous national security challenges facing President Joe Biden. At least two of them involve nuclear weapons in the hands of unpredictable dictators.

The White House said the North had “tried to hide these escalatory steps,” suggesting it was not ready to unveil a working version of the missile.

Although the missiles that were tested recently were designed as intercontinental missiles, the tests themselves were fairly short range. That suggests that components of the missiles were still being tested and that the United States was trying, with the revelation, to short-circuit a more comprehensive test that might show whether the weapon could reach American shores.

The United States, the senior administration official said, shared the intelligence with allies and then revealed the new missile tests — and warned of the possibility of a much larger test, thinly disguised as a space launch — in an effort to raise awareness and begin a rallying call for new sanctions against Kim’s government.

It is a similar strategy to the one used starting in November to reveal intelligence about Russia’s buildup along Ukraine’s border.

But those revelations, while unifying NATO, ultimately failed to stop the invasion. On Thursday, several senior American officials said they believed Kim would also go ahead, in an effort to demonstrate that the new missile could strike the United States or its allies — and to seize attention.

Kim visited his country’s space launching station near its northwestern corner, ordering his engineers to expand and modernize the facilities there so that “various rockets could be launched to carry multipurpose satellites, including a military reconnaissance satellite, in the future,” the North’s official Korean Central News Agency reported Friday.

South Korea’s Defense Ministry said Friday that North Korea may test its new ICBM under the disguise of launching a satellite.

The two tests conducted over the past 12 days were notable for several reasons.

They marked the end of a moratorium on intercontinental ballistic missile tests that has been in place since 2018, after a series of launches across the Pacific with an older version of the North’s intercontinental missiles led President Donald Trump to threaten the country with “fire and fury like the world has never seen.” Trump then turned around and conducted three face-to-face meetings with Kim, and the two leaders exchanged admiring letters.

Trump claimed after his first meeting with Kim in Singapore that he had made great progress and that the North would soon start reducing its armaments. But the diplomatic effort soon fell apart, and the North did not give up a single weapon as a result of his summit diplomacy. It continued to amass nuclear fuel for its arsenal and worked on a maneuverable warhead that is intended to defeat American missile defenses in California and Alaska.

Some experts believe that same warhead was part of the tests conducted on Feb. 26 and March 4. But American officials would not answer questions about whether they had determined it was a maneuverable, hypersonic warhead, intended to evade traditional American missile defenses.

At the time of its public debut in October 2020 — at a North Korean military parade, as noted on Thursday by the senior administration official — the weapon made a splash among missile experts.

Vann Van Diepen, a former weapons analyst in the Office of the Director of National Intelligence, and Michael Elleman, a missile expert at the International Institute for Strategic Studies, that October said in an analysis that the weapon was a mobile missile that appeared to be up to 85 feet long. A photo showed the missile’s transporter bearing 11 enormous black tires on each side.

The two experts judged the missile’s engines to be liquid-fueled and said that if its first stage held four engines, the missile could, “in principle,” deliver up to nearly 4 tons of payload “to any point in the continental United States.” Its lifting power, they added, would thus be “much greater” than that of the Hwasong-15 — previously North Korea’s most capable ICBM, tested in November 2017.

In an interview, Van Diepen said he was surprised at Washington’s characterization of the missile as a new ICBM because it went to peak heights of just 385 and 350 miles, respectively, during its testing on the first and second day this year. In an article, he had characterized it as a medium-range missile.

In contrast, the Hwasong-15, on its one and only test flight, flew to a height of 2,780 miles, according to the North Koreans.

Van Diepen said that if Washington’s ICBM analysis was correct for the new missile, it had soared far short of its capabilities, perhaps as part of a cautious approach to engine testing. “Maybe it was not fully fueled or they cut off the engines,” he said.

Still, if more flight-testing proves it to be the same missile that made its public debut in 2020 during the military parade, Van Diepen said, it would represent a fearsome new addition to North Korea’s expanding arsenal. For instance, its vast lifting power in theory would let it loft multiple nuclear warheads at once, greatly increasing its destructive power.

“It’s another potential threat to the homeland,” he said. “But they’ve got a way to go” to perfect its hundreds of systems and prove its ability to send a warhead that speeds easily through space and then experiences the jolt of a fiery atmospheric reentry toward a target on the ground.

To date, Van Diepen said, “they haven’t yet tested any ICBM to full range, so by definition they haven’t confirmed that their warheads could survive reentry.”

Indian Army's J&K Light Infantry Unit jawan missing from Budgam, whereabouts are being traced
Goa CM Pramod Sawant taunts Congress before election results
The robbers got a huge amount in the robbery, then the offering of 1 lakh was offered to God, in the...
Previous Post