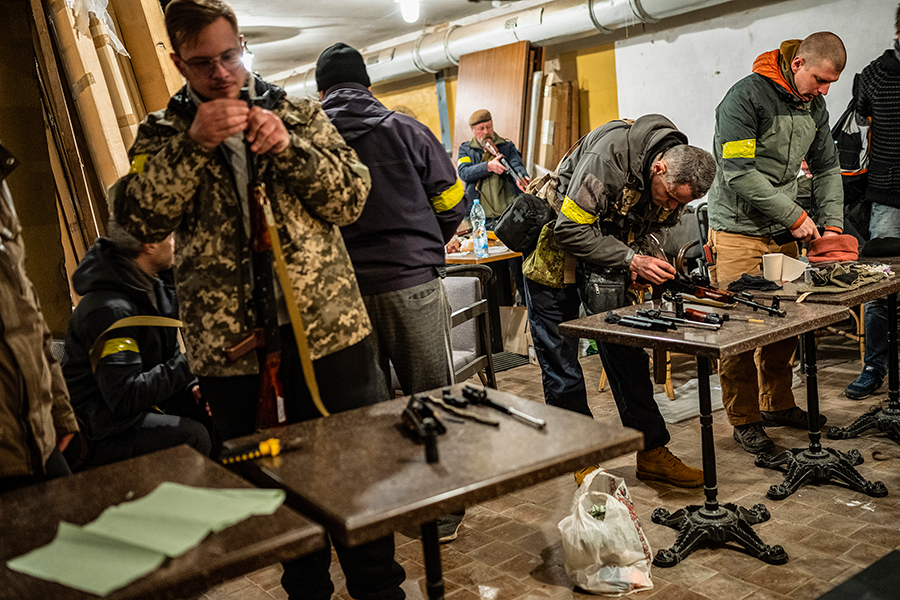 Volunteers are armed at a base where Ukrainian men and women received rapid military training, from intelligence to weapons, in Kyiv on Feb. 28, 2022. If there is one overriding emotion gripping Ukraine right now, it is hate; much of the bitterness is directed at Russian President Vladimir Putin, but Ukrainians also chastise ordinary Russians, calling them complicit. (Lynsey Addario/The New York Times)

LONDON — With Ukraine’s outgunned army holding firm despite Russian bombardments that have displaced millions of civilians, the war in Ukraine has become a grim spectacle of resistance, no one more defiant than the country’s president, Volodymyr Zelenskyy, who vowed Tuesday never to give in to Russia’s tanks, troops or artillery shells.

In a dramatic video address to Britain’s Parliament, clad in his now-famous military fatigue T-shirt, Zelenskyy echoed Winston Churchill’s famous words of no surrender to the same chamber at the dawn of World War II as Britain faced a looming onslaught from Nazi Germany.

“We will fight till the end, at sea, in the air,” Zelenskyy said with the blue-and-yellow Ukrainian flag draped behind him. “We will fight in the forests, in the fields, on the shores, in the streets.”

The speech, the first ever by a foreign leader to the House of Commons, was the climax of Zelenskyy’s darkest-hour messaging to fellow Ukrainians and the world in what has become a typical 20-hour day for him in Kyiv, the besieged capital.

In his daily speech to the nation, he claimed that Ukraine had inflicted 30 years of losses on Russia’s air force in 13 days. And in an internet video posted Monday night from his presidential office, he all but taunted President Vladimir Putin of Russia.

“I’m not hiding,” Zelenskyy said. “I’m not afraid of anyone.”

Nearly two weeks into Russia’s war, it was becoming ever clearer that the Kremlin’s military planners, not to mention Putin himself, had dramatically miscalculated not only the grit of Ukrainian resistance but also the calamitous economic consequences for Russia, which Tuesday faced a major new embargo of its oil exports and a growing exodus of large American companies.

At the same time, the scope of the humanitarian disaster across Ukraine was growing by the hour, as were the reverberations among its European neighbors. Russian forces continued to batter Kyiv and other cities. In Mariupol, a strategically crucial port city surrounded by Russian forces, hundreds of thousands of people remained trapped without water, electricity and other basic services.

In his speech to British lawmakers, Zelenskyy reiterated his plea for the NATO alliance to impose a no-fly zone over Ukraine, something NATO leaders have ruled out because they fear it could trigger a wider military clash between the West and Russia.

But the West further tightened the economic vise on Russia, with the United States and Britain announcing oil embargoes and a new raft of business suspensions by big-name American corporations including McDonald’s, Coca-Cola, PepsiCo and Starbucks. McDonald’s move was especially noteworthy since the opening of the chain’s first outlet in the Soviet Union, on Pushkin Square in January 1990, was marked by throngs of Russians pushing and shoving to get inside and place their “Beeg Mek” orders.

“Now is not the time to let up,” Britain’s foreign secretary, Liz Truss, told reporters Tuesday as she pledged that the world’s advanced industrialized countries would work out a timetable to reduce their dependence on Russian oil and gas.

Despite these statements of solidarity and Zelenskyy’s expressions of defiance, the war’s human cost has risen fearfully. The United Nations reported that more than 2 million Ukrainians — half of them children — had fled the country, the fastest-growing refugee crisis to afflict Europe since World War II.

Poland, a major recipient of the fleeing Ukrainians, said it was rushing to convert schools, churches and stadiums into temporary housing for them. “Shelters are being created rapidly,” said Piotr Bystrianin, head of the Ocalenie Foundation, a Polish refugee charity. “But it’s not enough.”

The Russian military’s invasion force, estimated to be roughly 200,000 troops when the war began Feb. 24, had still not taken any major Ukrainian cities except the southern port of Kherson, despite repeated artillery and rocket barrages on other strategic urban centers. The targets included Mariupol and nearby Mykolaiv in the southeast, the eastern city of Kharkiv, and Kyiv, where Zelenskyy offered a video tour of his office Monday evening.

Addressing British lawmakers Tuesday, Zelenskyy offered a vivid, day-by-day summary of the misery Russia has wrought since it invaded. From the cruise-missile strikes that shattered the predawn peace as the assault began to the panic of trapped residents in Mariupol, he painted a picture of a country in the grip of a humanitarian disaster.

After days of failed evacuation efforts because of Russian attacks, at least one humanitarian corridor lasted long enough to allow hundreds of civilians to escape from Sumy, a war-battered city east of Kyiv. People left in a convoy of buses led by the Red Cross, despite shooting near the evacuation route, said Dmytro Zhyvytsky, governor of the region.

Almost since the first day of the war, the Ukrainian government has made efforts to evacuate people from cities under attack or under threat. The national rail service alone has transported more than 1 million people on special evacuation trains.

But attempts to open a humanitarian corridor in places of active fighting had mostly failed until now. Zelenskyy said the failure to open corridors to all seeking escape was a tragedy compounded by Ukraine’s vulnerability to the barrage of missiles and aerial bombardments launched by the Russians.

“The blame for every death of every person in Ukraine from airstrikes and in blocked cities is, of course, on the Russian state, on the Russian military,” he said in his daily speech to the nation. He implored Western nations to do more to help Ukraine secure “the Ukrainian sky from Russian assassins.”

Russia’s military superiority in size and weapons, however, has not insulated the invasion force from repeated losses and setbacks. While independent corroboration of battlefield claims is difficult, it was clear that Ukraine’s defenders had flustered the speed of the Russian advance.

Since the start of the war, Ukraine’s military claims to have killed more than 12,000 Russian soldiers. Western officials said that number was high, although there had likely been several thousand Russian casualties.

In its latest daily update Tuesday, the Ukrainian military said it had shot down or destroyed 48 Russian airplanes and 80 helicopters; captured or destroyed 303 tanks and hundreds of mechanized vehicles and cars; taken out two Russian naval vessels, including a warship; and blown up dozens of fuel tanker and mobile missile launching systems.

Of course, Ukraine and its Western allies see the promotion of Ukrainian victories as in their interest, and they tend to play up logistical and morale problems in the Russian ranks. By what U.S. officials described as conservative estimates, Ukrainian soldiers have killed more than 3,000 Russian troops.

Nonetheless, there is no sign that Putin will soften his approach to subjugate Ukraine, part of the Russian leader’s avowed intention to strengthen Russia against what he has described as an existential threat by the West.

At a briefing in Washington for Congress on Tuesday, the top U.S. intelligence official, Avril Haines, told lawmakers that she expected Putin would be “essentially doubling down” in the invasion, to force Ukraine to disarm and proclaim neutrality.

Haines, the Biden administration’s director of national intelligence, said Putin “feels aggrieved the West does not give him proper deference and perceives this as a war he cannot afford to lose.”

Owaisi could not collect color in UP, made political attacks with sharp statements, yet it was clean
Know everything about the AAP MLA who defeated Majithia and Sidhu in the political arena
CBI arrests former NSE MD Chitra Ramakrishna in stock market fraud case
Previous Post