Forbes India – Simply Speaking: With Holi Around The Corner, Explore The Magic Of Colour 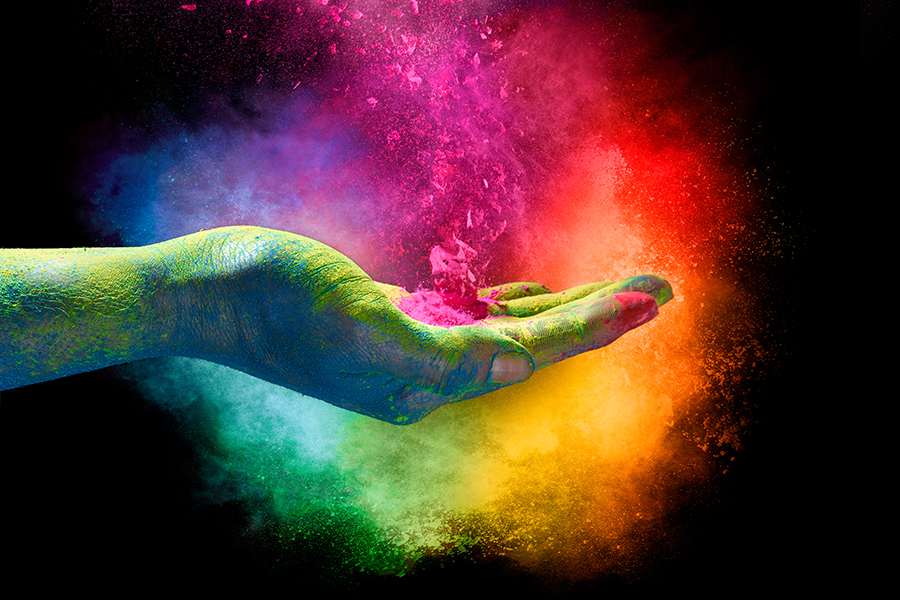 We see the world in colour. This enriches and colours our lives. But how do we relate to colour? When and how does colour enter our language? Image: Shutterstock

Note to readers: I’m intrigued by information such as that eight percent of the population is left-handed, that giraffes only sleep five minutes every twenty-four hours and so on, which is useless but important! In the eighteenth century, German aristocrats kept glass-fronted cabinets that displayed curios. They called it Wunderkammern. This column is one such thing. In an unmarked field, it is easy to wander. I want to open windows to glimpse views rather than a whodunnit or a how-to-do-it. I have a licence to be long or short. To be structured or abrupt. This column has no beginning, middle or end. It’s a journey without a destination. Simply speaking…****

Colour is the place where our brain and the universe meet. – Paul Klee

We see the world in colour. This enriches and colours our lives. But how do we relate to colour? When and how does colour enter our language? This week, we shall explore how colours have entered our culture, usage and language slowly in a process rich with history and fusion.

There is a popular myth that the Inuit Eskimos have a hundred or more words for snow. In fact, they have no more than we do for rain in Hindi. William Gladstone thought Homer was colour blind because of his paltry use of words, describing colour.

Colours existed before man or any life form. But in cultural terms, their entry has been a glacial process. Ancient Greeks had no word for blue. Even until the Middle Ages, there was no English word for orange. Chaucer referred to it as ‘bitwixe yelow and reed’. Today, although we can differentiate millions of shades, our vocabulary has, on average, about thirty words for colour. Test yourself if you feel otherwise.

According to anthropologists who analysed 98 widely differing languages, colour words are acquired by cultures in a strict sequence. This was documented in Martin Gardner’s book ‘Order and Surprise’ published by the Oxford University Press. The study showed all languages have black and white. If there are three words, the third is red. If there are four colours in all, then next are green or yellow. Then follow blue and brown. If eight or more, then purple, pink, orange and grey are added, in order.

However, the more we explore language and culture, we see it isn’t so black and white (pun intended).

An African desert tribe has no word for green, but six for red. Italian has three words for blue: Celeste, Azzurro and Blu. Swahili doesn’t have any, so Bulu was coined from English. Creek and Natchez American Indians use the same name for yellow and green, as do the Highland Scots for blue and green.

French has two words for brown: Brun and Marron, but there isn’t one in Mandarin, Japanese and Welsh. The Inuit Eskimos also don’t have a word for brown, which isn’t a surprise. Contrary to myth, they have at least seven words for white. There is a tribe in the New Guinea Highlands that still speaks a black and white language and distinguishes colours in terms of brightness. Fascinating.

In Anglo–Saxon, black is Blaece and white is Blac. Hence, Blanch, Blank, and Bleak mean what they do, derived from the latter word.

Associations with colour are impassioned, illogical, and deep-rooted. There is an old story about packaging trials of a detergent in three packs of different colours. One yellow, one in sky blue, and one in yellow and deep blue. A panel of housewives was asked to try them out. They judged the powder in the yellow pack as corrosive, the blue one as too mild, the yellow and blue just right. The packs all contained the same powder.

Dr Max Luscher diagnosed personality disorders through colour associations. The Luscher colour test assumes that an unconscious choice of colours reflects a person’s focus on certain activities, moods, and personality traits. His conclusions were that dark blue appeals to people motivated by security. Blue-green is associated with constancy. Orange-red seems to be related to activity.

Henry Ford famously said, “you could have a car in any colour you liked so long as it was black.” He had his reasons.

Apparently, only black enamel dried quickly enough to be used on the conveyor belt. This baked enamel coating was called ‘Japan black’, a lacquer or varnish so named due to the history of black lacquer being associated in the West with products from Japan.

Its high bitumen content provides a protective finish that is durable and dries quickly. This allowed Japan black to be used extensively in the production of automobiles in the early 20th century in the United States.

Five thousand men continuously painted in the vast Ford plant in Detroit. Henry Ford also believed that ‘machine blue’ and ‘eggshell’ white were beneficial for ‘order and morale’. They are still the company colours. There is a fascinating account of all this by Alexander Theroux in ‘The primary colours’, published by Picador.

Green has always been considered, natural, calming and restful. The Romans prized it highly. Pliny wrote that ’emerald delights the eye without fatiguing it’. Nero peered through an emerald while enjoying lions devouring men at the circus.

Theatres have a green room so that actors relax from the footlight glare. Green was also Oscar Wilde’s colour, always wearing green carnations supplied by his florist Goodyears. L Frank Baum imagined the Emerald City in ‘The Wizard of Oz’ whose citizens saw everything in beautiful shades of green.

Colour was at the heart of the first and only ‘propaganda vegetable’—the carrot. If the carrot went back to its origins, it would be purple. In Egyptian and later in Roman times, carrots were purple or white. In the Middle Ages, they were also black, red and green. They have only been orange since the 16th century when patriotic Dutch growers favoured the House of Orange. A propaganda vegetable indeed.

In 1945, gangster Bugsy Siegel arrived in Las Vegas. It was at that time no more than an oasis in the desert. There he set up a hotel and casino. Tom Wolfe, in his book ‘The Kandy-Kolored Tangerine-Flake Streamline Baby,’ described it with these words: “He called it The Flamingo. An iridescent name which, burst upon the scene with all the new electrochemical pastels of the Florida littoral. Tangerine, broiling magenta, livid pink, incarnadine, Fuschia demure, Congo ruby, methyl green, viridian, aquamarine, phenosafranine, incandescent orange, scarlet-fever purple, cyanic blue, tessellated bronze, hospital-fruit-basket orange.”

What I find fascinating about this colourful prose is that it captures the principle in the fixing of names to colours to showcase association.

Josef Albers wrote a famous work, ‘Interaction of Colour’. But two millennia before, Homer wrote of ‘wine-dark’ seas, Romans called a particular blue from overseas ‘ultramarine’ and a dye produced by a whelk, a ‘purple Porphyra’. ‘Caput mortuum’ was a purplish-brown made of decomposed brains. ‘Puce’ is named after the supposed hue of a flea’s belly, and the dye magenta was invented in 1859 and named to commemorate the Battle of Magenta—which occurred the same year. Many want turquoise to be called grue—a combo of green and blue.

Some colours entered the language as material earlier than colour. ‘Purpura’ was first the name of expensive silk in that colour—purple worn by aristocrats and patrician senators in Rome. In the eleventh century, a scarlet was a fine woven cloth—generally an undyed white or coloured black, blue or green.

A sign of refinement among the Edwardian English middle class in the 1930s was to describe outfits in terms of fruit. ‘Lemon’, ‘Crushed raspberry and ‘Burnt apricot’ were particular favourites. There was anthracite, mould, putty, and ‘a lovely mud colour’ described as both taupe or grège. When we say tangerine or blueberry we convey the sensation of a colour relating it to something else. It brings joy.

There are endless magical words. Learning about them is a lesson in history, economics and sociology.

Rose madder: Made from the root of the plant Rubia tinctorum brought back from Palestine by the Crusaders. This was so precious that the price was fixed by the French authorities, and it was first known as La Garance (guarantee). The name of the state Massachusetts is a tribal word for ‘Blue Hill’.

Quercitron (or flavin, Dutch pink, English pink, Italian pink): A yellow dye from the bark of an oak. In Latin Oak is Quercus.

Celadon: A pale fusty green. Named after a ceramic found in ancient China.

Fulvous: A dull tawny orange like buff, beige or butterscotch. It is one of the most used descriptors of colour in the binomials of species.

Luteous: A deep orange. From lutum, a plant Reseda lutteola used for dyeing.

Carthamin: A brooding red from the safflower, Carthamus tinctorius, originally from ancient Egypt.

Kermes: A bright red made by tiny bugs called Qirmiz in Turkish and Kirmizi in Persian.

Sinoper: A red pigment. From the Turkish city, Sinop. A dark reddish-brown earth pigment. The colour comes from hematite.

Almagra: A deep red ochre. An ‘Indian Red’ but from Spain. The word is Arabic (Al-Mugra: red earth)

Rubescent: A reddening like a blush from Latin ruber for red.

Turnsole: A violet/purple. From the plant Chrozophora tinctoria, it was a cheap substitute for the prohibitively expensive Tyrian purple derived from molluscs.

Smalt: A deep blue from cobalt oxide. First described by Borgini in 1584.

Azurite: A soft, deep blue derived from weathered copper mineral. It was also called Chessylite after Chessy-Les-Mines in France. The Greeks called it Kuanos, the root of the English colour word cyan.

Tenebrous: A dark, obscure, gloomy lack of colour. Like the grey-black of a dark forest.

Murrey: A medieval word for the colour of mulberry.

Puniceus: A reddish-purple colour of a flower loved by Ancient Greece

Forbes India – Early To Bet & Early To Rise: How Antler Is Changing Early-stage Investing In India

Why Congress lost in Punjab? Sunil Jakhar disclosed, told this leader a burden on the party

Why Congress lost in Punjab? Sunil Jakhar disclosed, told this leader a burden on the party