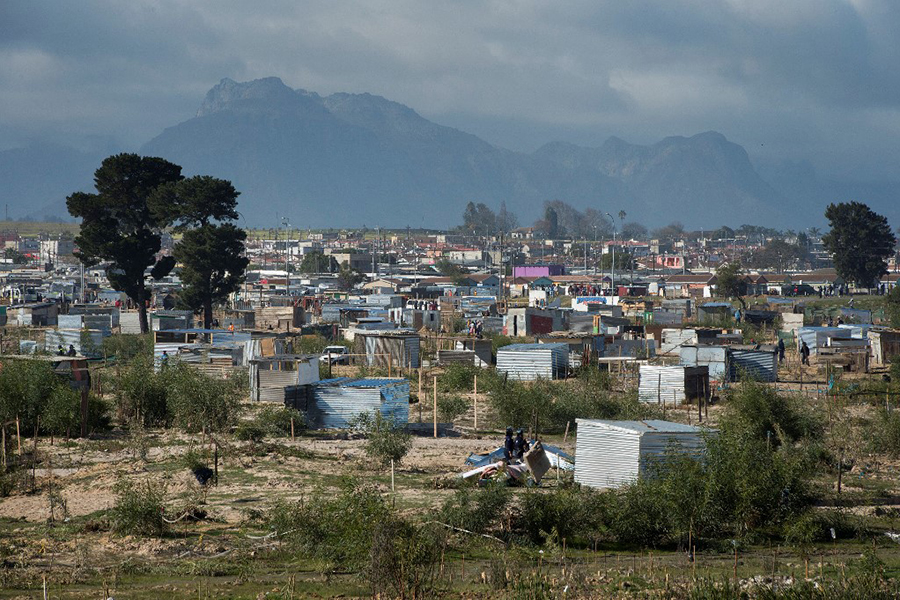 A general view shows the newly established informal settlement, as workers, begin demolishing uninhabited shacks in Bloekombos, Kraaifontein, in Cape Town.This land, due to be developed for civic amenities, for nearby communities, was illegally occupied by people, who marked out plots, and built informal dwellings. (Credit: RODGER BOSCH / AFP)

South Africa is the most unequal country in the world, with race playing a determining factor in a society where 10 percent of the population owns more than 80 percent of the wealth, a World Bank report said Wednesday.

“South Africa… is the most unequal country in the world, ranking first among 164 countries,” the Washington-based institution said in a report called ‘Inequality in Southern Africa’.

Nearly thirty years after the end of apartheid, “race remains a key driver of high inequality in South Africa, due to its impact on education and the labor market,” it said.

When race is considered as a factor in income disparities, the report added, “its contribution to income inequality amounts to 41 percent, while contribution of education is reduced to 30 percent.”

“The legacy of colonialism and apartheid, rooted in racial and spatial segregation, continues to reinforce inequality.”

The country’s neighbours that make up the rest of the Southern African Customs Union — Botswana, Eswatini, Lesotho and Namibia — all finish high on the list of the most unequal countries in the world.

In the region, women earn on average 30 percent less than men with the same level of education.

The pay gap between men and women reaches 38 percent in Namibia and South Africa.

The uneven distribution of agricultural land is also a factor driving inequality, especially in rural areas.

In Namibia, 70 percent of the 39.7 million hectares of commercial agricultural land “still belong to Namibians of European descent”, the World Bank said.

The report was produced before the Covid-19 pandemic and its authors used the Gini coefficient — an indicator of income inequality — to rank countries.

Cycle chain landed in the citadel, lost Kannauj-Etawa seat, how was the condition of BJP-SP in ‘Yadavland’