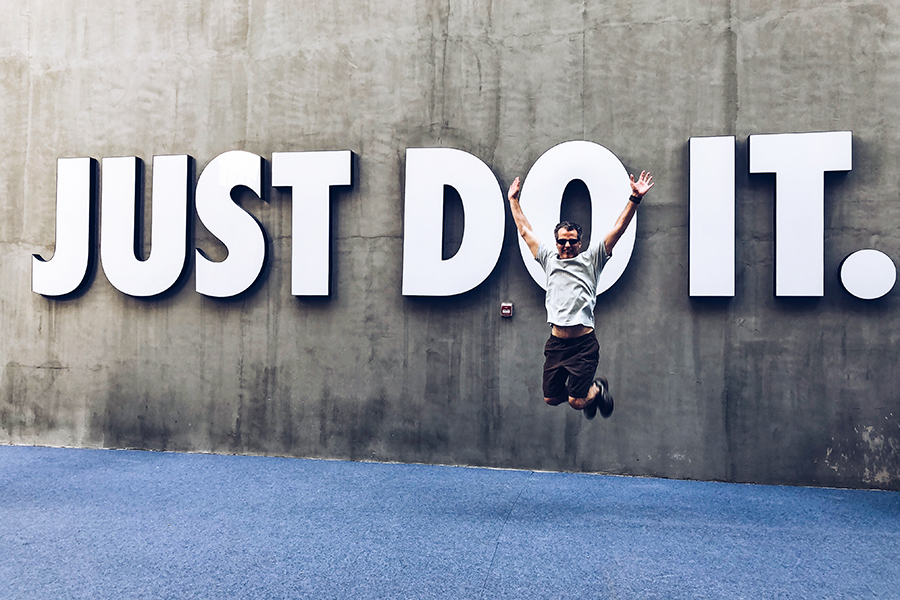 At an advertising level, Nike’s direction to “Just do it” or L’Oréal telling you to try its products “Because You’re Worth It” work because they relate to consumer’s usage of the brand. (Credit: Shutterstock)

Note to readers: I’m intrigued by information such as that eight percent of the population is left-handed, that giraffes only sleep five minutes every twenty-four hours and so on, which is useless but important. In the eighteenth century, German aristocrats kept glass-fronted cabinets that displayed curios. They called it Wunderkammern. This column is some such thing. In an unmarked field it is easy to wander… I want to open windows to glimpse views rather than a whodunnit or a how-to-do-it. I have a licence to be long or short. To be structured or abrupt. This column has no beginning, middle or end. It’s a journey without a destination. Simply speaking…

“In many ways it is language that makes us feel human. Ours is a world of words. Our thoughts, our world of imagination, our communication, our rich culture all these things are woven on the loom of language. Language can conjure up images in our minds. Language can stir our emotions–sadness, happiness, love, hatred. Through language we can express individuality or demand group loyalty. Quite simply, language is our medium.” – Richard Leakey Origins
Language—brand interactions have not been studied enough, if at all.

For a brand to mean something, it needn’t do something. That said, the strongest brand equities often manifest in language as action verbs.

At an advertising level, Nike’s direction to “Just do it” or L’Oréal telling you to try its products “Because You’re Worth It” work because they relate to consumer’s usage of the brand. But only a very few brands enter language as verbs. Those that do end up owning substantial mind space and generically represent a vertical, product group or consumer need.
Action-based branding is an exalted creative process too. Why is it that brands such as Google and Uber became verbs, but not others like Microsoft or Apple?

We ‘Google everything’ but never ‘Yahoo’d anything’.

What’s the secret that a few brands go up the action ladder but not others?

To be a verb brand, a specific, regularly executed action has to be owned. So, ‘to Google’ means searching on the web, ‘to Facebook’ is socialising within your network. I have heard ‘email it to me’ being used the same as ‘Gmail it to me’ but it’s not quite there.

Sometimes a brand can colonise an area of activity as it flourishes and creates a synonymity. The process of Xerography was invented in 1938 whilst Xerox as a company came into this world of copying in 1959. Prior to this, words such as facsimile and photocopy were in vogue but eventually the brand name Xerox came to mean photocopying.

Despite mammoth success worldwide, there is no ‘to Vodafone’ or ‘to Boeing’. This is so because a brand must be universally known and the actions must be unique, frequent and differentiated. Listening to downloaded music qualifies on all grounds except being unique. I do feel for Walkman as I think it lost out despite qualifying thoroughly. ‘To Uber’ hasn’t become generic but defines ride hailing whenever you do use it in language.
To buy a Bisleri in India could mean any packaged water. Yet, you are buying a Bisleri to quench thirst, not simply ‘to Bisleri’ though—in its recent advertising—camels are shown doing so in the middle of a desert.

‘To Hoover’ represented vacuum cleaning per se. Amul is the taste of India perhaps but actually it was “doing Colgate” that came very close to owning brushing of teeth in rural India. Before it went bankrupt, there were billions of Kodak moments but you didn’t ‘Kodak it’. Visa may own payments by card but we ask for a bill, we don’t ‘Visa it’.

This seems a credible reward in terms of consumer esteem but can be a devastating loss of value in a legal-commercial sense. After all, the value of a brand is estimated by subtracting a company’s assets from the capitalisation. That’s worth tens of trillions of dollars put together perhaps. All of this rests on exclusive ownership in the eyes of the law.

Naturally, corporations are nervous of losing rights to names or brands when the danger isn’t from counterfeiting or robbery, but language.

The problem is bound to arise when the brand name becomes the general name of the thing or activity-like hoover. That is to say when brand names appear printed in lower-case letters without a capital. This is the fatal moment when they legally pass from being names of things, to descriptions of what those things did or do. Thus, passing into everyday language and thus becoming public property.

This happened to cellophane when the courts judged it to be the name of the material rather than the brand. The result meant Du Pont lost exclusive rights to the brand name.

Other casualties include aspirin, escalator, kerosene, lanolin, zipper, yo-yo, linoleum, thermos, milk of magnesia and shredded wheat. Even Monopoly lost its monopoly. In 1982, after 47 years and 85 million sales, the law ruled that Parker Brothers who owned the game must share the name. The successful action was brought by economics professor Ralph Anspach, who had invented Anti-monopoly, a game in which trust-busters seek to break up the multinationals.

Successful brand-verbing is a wonderful outcome for a brand. But it’s elusive, probabilistic and dangerous at the same time. Whether it happens thanks to a first mover status or via new market creation, it is nevertheless a Darwinian triumph because two brands never earn brand action verb status for the same thing.

Congress can return to power in Uttarakhand, what will be the formula if it does not get majority?

Congress can return to power in Uttarakhand, what will be the formula if it does not get majority?