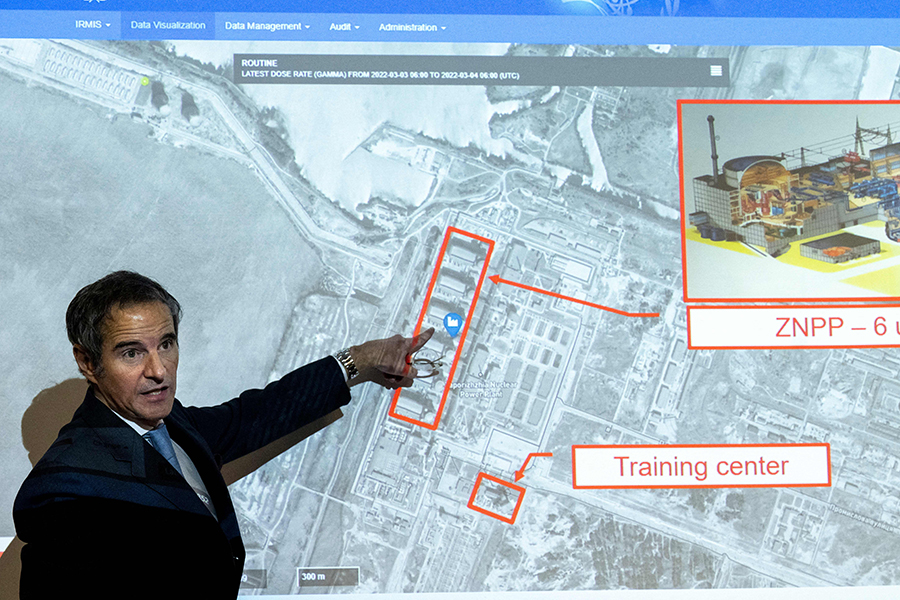 Rafael Grossi, Director General of the International Atomic Energy Agency (IAEA), points on a map of the Ukrainian Zaporizhzhia nuclear power plant as he informs the press about the situation of nuclear powerplants in Ukraine during a special press conference at the IAEA headquarters in Vienna, Austria on March 4, 2022. Grossi offered to travel to Chernobyl in order to negotiate with Ukraine and Russia to try to ensure the security of Ukraine’s nuclear sites. (Photo by JOE KLAMAR / AFP)

Vienna, Austria: The Chernobyl nuclear power plant is no longer transmitting data to the UN’s atomic watchdog, the agency said Tuesday, as it voiced concern for staff working under Russian guard at the Ukrainian facility.On February 24, Russia invaded Ukraine and seized the defunct plant, site of a 1986 disaster that killed hundreds and spread radioactive contamination west across Europe.

International Atomic Energy Agency chief Rafael Grossi “indicated that remote data transmission from safeguards monitoring systems installed at the Chornobyl NPP had been lost”, the agency said in a statement.

“The Agency is looking into the status of safeguards monitoring systems in other locations in Ukraine and will provide further information soon,” it said.
The IAEA uses the term “safeguards” to describe technical measures it applies to nuclear material and activities, with the objective of deterring the spread of nuclear weapons through early detection of the misuse of such material.
More than 200 technical staff and guards remain trapped at the site, working 13 days straight since the Russian takeover.

The situation for the staff “was worsening” at the site, the IAEA said, citing the Ukrainian nuclear regulator.

The defunct plant sits inside an exclusion zone that houses decommissioned reactors as well as radioactive waste facilities.

More than 2,000 staff still work at the plant as it requires constant management to prevent another nuclear disaster.

The UN agency called on Russia to allow workers to rotate because rest and regular shifts were crucial to the site’s safety.
“I’m deeply concerned about the difficult and stressful situation facing staff at the Chornobyl nuclear power plant and the potential risks this entails for nuclear safety,” said Grossi.

“I call on the forces in effective control of the site to urgently facilitate the safe rotation of personnel there.”

With remote data transmission cut off and the Ukrainian regulator only able to contact the plant by email, Grossi reiterated his offer to travel to the site or elsewhere to secure “the commitment to the safety and security” of Ukraine’s power plants from all parties.

Zaporizhzhia alone has six reactors of a more modern, safer design than the one that melted down at Chernobyl.

The IAEA said two of those were still operating, the plant’s personnel were working in shifts and radiation levels remained stable.

On Wednesday, Russian news agency RIA Novosti published a video of a Russian national guard official in front of the Zaporizhzhia atomic plant saying Moscow’s forces were in full control of the site.

“Currently, the plant is operating as normal. The management of the site is fulfilling its functions. The situation is fully controlled by the Russian national guard,” the official said.

The official accused Ukraine of storing weapons at the facility.

“A large number of armaments and ammunition, including heavy weapons, were discovered in the reactors of the plants,” after it was taken by Russian forces, the official said.

Forbes India - Does TikTok Plan To Go Head To Head With Spotify?
To Stay Happy: Live And Eat Healthy | Forbes India
Forbes India - Islamic State Has A New Head. But We Know Little About Him
Previous Post