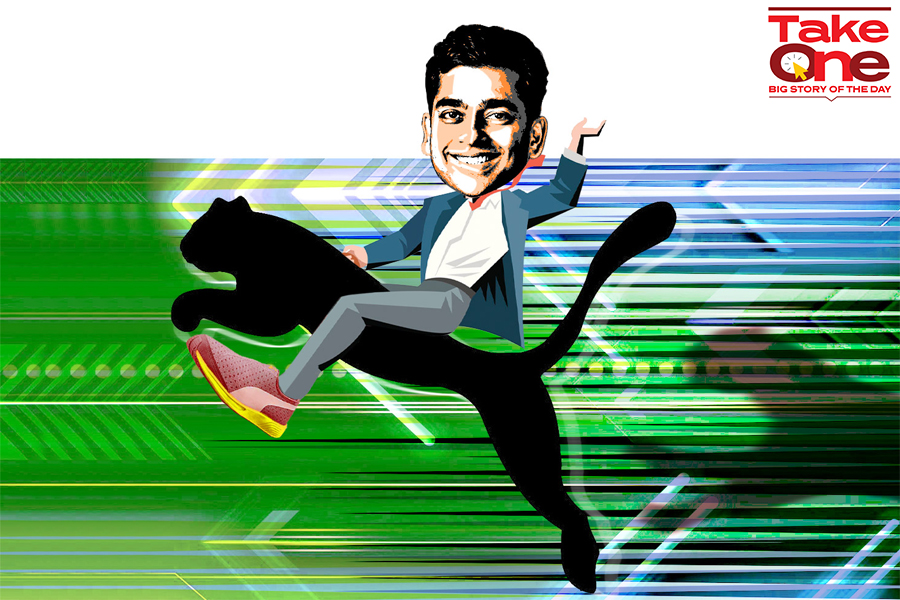 Abhishek Ganguly, managing director, Puma India and Southeast Asia, reckons the underdog tag stoked fire in his belly. It made him perpetually hungry, and relentless.

The intention was to forewarn. ‘The shoe will pinch’ is how Abhishek Ganguly’s colleagues and friends reacted when they got to know that the regional manager is quitting Reebok. After a three-year stint, Ganguly was set to join rival Puma as director of sales and marketing in November 2005. The concern was valid. Puma, which was the last among the big global sportswear makers to enter India in 2005, closed the first year with a puny revenue of Rs 22 crore. Compare this with the big boys: Nike posted FY06 sales of Rs 99 crore; Adidas was sitting pretty with Rs 186 crore; and Reebok was on the top of the heap with a staggering Rs 354 crore.

‘Who knows Puma’ was how Ganguly’s bosses mocked and pricked the enthusiasm of their soldier who was about to snap the buckles and put on new marching shoes. The cockiness of the biggest brand permeated into the behaviour of the top bosses. “There was a lot of doubt, which could have led to self-doubt,” recalls Ganguly. The questions asked, though, had serious merit. Was there space for one more sports brand in India? Did Puma actually stand a chance in its fight against the big boys? After all, Puma’s underdog status in India was a grim reality.

Ganguly’s intention was to stay firm. The new recruit had lived a life of the underdog, and a series of déjà vu moments only made him more dogmatic.

Five years ago, in 2000, when Ganguly made it to IIM-Lucknow, the maths grad from Bhagalpur University in Bihar encountered one such ‘who are you’ moment. “What is TNB college”, some of his batch mates took a dig, alluding to the institution from where Ganguly graduated. Later on, when he stepped into the professional world, he realised that he didn’t have the ‘ABC’ of management on his resume. IIM-Lucknow was perceived to be fourth on the pecking order of IIMs—Ahmedabad, Bangalore and Calcutta were the top three. 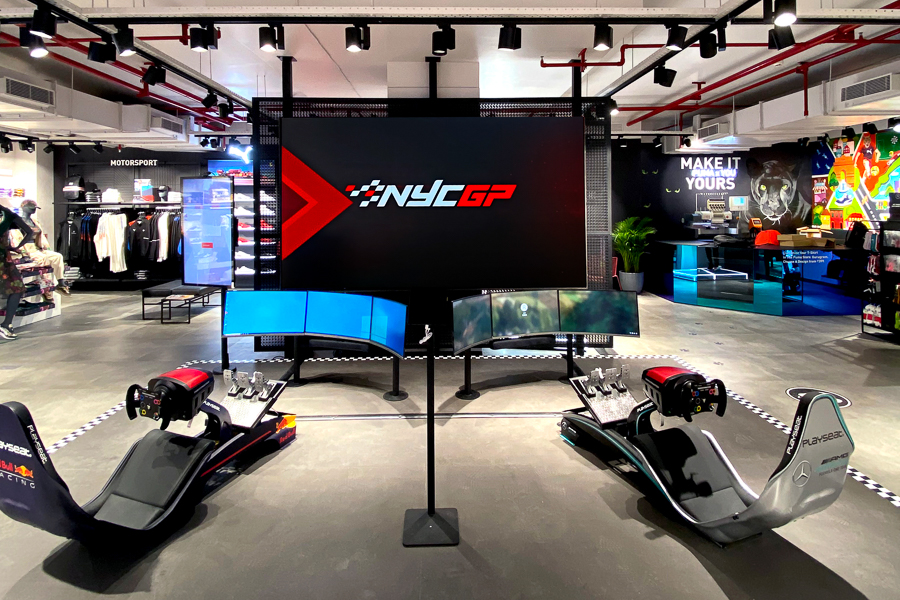 Showcasing the success of PUMA’s Motorsport category in India, the brand’s experiential store at Cyber Hub in Gurgaon features professional-grade Formula 1 racing simulators for shoppers to enjoy a virtual race on multi-country tracks. The simulators installed at the store are exactly the same as used by F1 racing professionals worldwide

Back in early 2019, Puma sprinted ahead of Adidas. It posted a revenue of Rs 1,157 crore in 2018—Adidas’ corresponding number for FY18 was Rs 1,132 crore—and became the biggest in India. The performance still couldn’t convince detractors. “Looks like a one-time bump,’ and ‘the gap is not much’ were some of the back-handed compliments. Ganguly stayed mum. He kept running.

Fast forward to March 2022. Puma has clocked Rs 2,044 crore in revenue in FY21 as against Rs 1,215 crore in FY20, making it the first multinational sportswear and fashion brand to enter into the Rs 2,000-crore club in India (see box). What, though, is most interesting is the big leap over its rivals. Puma is now bigger than Adidas, Reebok, and Nike combined. The underdog is now the top dog. 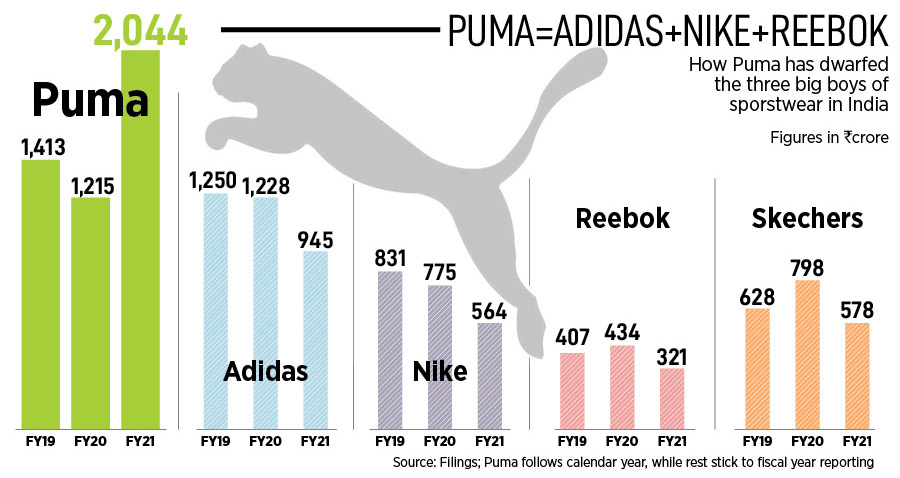 Ganguly reckons the underdog tag stoked fire in his belly. It made him perpetually hungry, and relentless. “It has really worked in my life,” he says. “I knew others had more resources, but I had to maximise what I had,” he adds.

Meanwhile, in March 2020, Puma found itself in a weird situation. January was the best the company had seen in India. Two months later, the country went under the first spell of lockdown. The challenge was grave. With negative and uncertain business environment, a pessimistic outlook on the job front, and hyper subdued consumer sentiment, companies and brands went inside their shell. Everyone started cutting cost, halting expenditure and suspending operations. “For the first time in our history in India, sales dropped,” says Ganguly. The company closed 2020 at Rs 1,215 crore, as against Rs 1,413-crore revenue that it clocked in 2019. Human instinct would have meant exercising more caution, Puma resorted to animal instinct.

It went for the kill. Puma sniffed an opportunity as work-from-home and online classes created massive demand for athleisure wear. While, in 2018, apparel made up just 32 percent of Puma’s sales, it touched almost 40 percent in 2021. What also helped was the lead the brand had on the digital curve. While, in 2018, most fashion and sportswear brands struggled to get their online act together and continued to stay largely offline, Puma had already made heady gains as 19 percent came from online sales. In two years, the numbers almost doubled to 36 percent, and touched 43 percent in 2021.

Interestingly, Puma’s aggressive offline play gave momentum to online sales. The German brand kept on expanding offline footprint in the country. From 360 stores in 2020, the count jumped to 411 in 2021. While stores were taking orders on WhatsApp and delivering to the consumers, Puma rolled out experiential outlets with F1 simulator, personalisation counter—get name, number, and design embroidered or printed in 30 minutes—and launched limited-edition products. 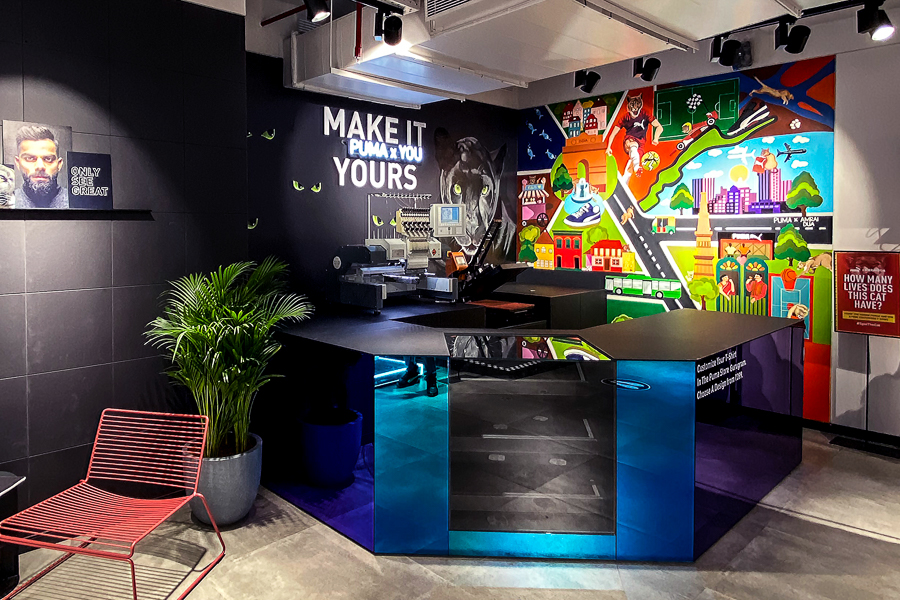 Showcasing the success of PUMA’s Motorsport category in India, the brand’s experiential store at Cyber Hub in Gurgaon features professional-grade Formula 1 racing simulators for shoppers to enjoy a virtual race on multi-country tracks. The simulators installed at the store are exactly the same as used by F1 racing professionals worldwide

There was also something—an experiment—which restrained Puma from being defensive in its approach. The brand launched ‘Puma on the Move,’ a consumer outreach programme wherein it set up pop-up stores at residential societies across the country. “It changed the trajectory of our offline retail business,” contends Ganguly. “It told us we should be more ambitious about our business,” he adds.

What also aided Puma’s sprint was its move to keep the marketing and advertising tap running in full flow. It doubled down on its collaboration with Virat Kohli for his brand One8, which it started in 2018, decided to sponsor football by taking team sponsorship of Mumbai City Football Club in ISL in 2020, and stitched another athleisure collaboration with cricketer KL Rahul and rolled out 1DER. Another bold move was to partner Royal Challengers Bangalore last year, which made its first sports MNC sportswear brand to join the IPL bandwagon after five years.

Ganguly explains the mindset and the aggressive play. When the ball swings and the conditions are overcast, one must adapt and still look for scoring. “Covid was more than a swinging ball. It was a curved ball,” he says, adding that the brand still needed to score. “Those who play for draw don’t win,” he says.

Puma’s big wins in India, reckon retail experts, can be explained by a bunch of factors. First is the underdog tag. “It didn’t have anything to lose of fear in India when it started,” says Ankur Bisen, senior vice president (retail & consumer products division), at consulting firm Technopak. The global bitter rivalry of the siblings—Puma versus Adidas—was not playing out in India. Second, a growing Indian market, rising aspiration of consumers and ballooning income meant that the demand for global brands was not going to die. Puma made the most of it. Third, it learnt from the blunders of Adidas and Nike. While the former was grappling with the Reebok fiasco, the latter struggled with its franchisee partners. “Puma observed, focused on online, and played a smart offline retail game,” he says. Fourth, the brand partnership it stitched with top cricketers paid off. While One8 clocked a meaty Rs 175 crore last year, 1DER did Rs 40 crore.

What also helped, underline brand gurus, was a relentlessly aggressive approach. Harish Bijoor, who runs an eponymous brand consulting firm, explains. There are brands with image, and then there are those who have image as well as revenue. “On the first count, Nike did exceedingly well,” he says. Puma, though, falls under the second bucket. “It lived up to its name and billing,” he adds. While the last-mover advantage helped, staying digital native came as a big blessing. 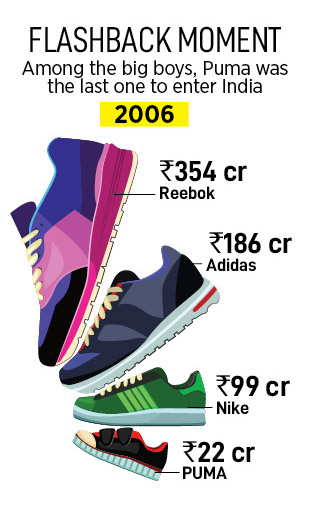 To a certain extent, the weakness of the rivals too came handy. While India increasingly turned into a blind spot for other global sportswear makers, Puma found the field wide open. “For all foreign players, India never had a problem on demand front,” says Bisen. If other brands failed or struggled, it was largely due to a disconnect in global and India strategies and leadership blunders. One of the top brands kept flirting between a strong global executive and a little-known Indian management. And those who got their act right, made most of the situation. Look at Skechers, which is now the third-biggest sportswear brand in India (see box). “Puma ticked all boxes,” he says.

But can the disruptor get disrupted? Can Skechers pose a challenge to Puma? Bisen reckons that the fight might come from two set of contenders. First, a new bunch of home-grown D2C brands, and the second is from the likes of Skechers.

Ganguly, for his part, is aware of the threat. “We are not complacent,” he says. If Puma can dethrone the incumbents, then it could face stiff fight, too. What, though, he is banking on to tide over potential challenges is an unsaturated Indian market, and an animal instinct. “Rs 2,000 crore means nothing if we don’t stay nimble, agile and aggressive,” he says. The Big Cat is still hungry and on the move.

This time there will be no Deputy CM in Goa, Chief Minister’s name will be final! Clear picture about Manipur

Forbes India – Dollars Or Rubles? Russian Debt Payments Are Due, And Uncertain

Forbes India - Dollars Or Rubles? Russian Debt Payments Are Due, And Uncertain