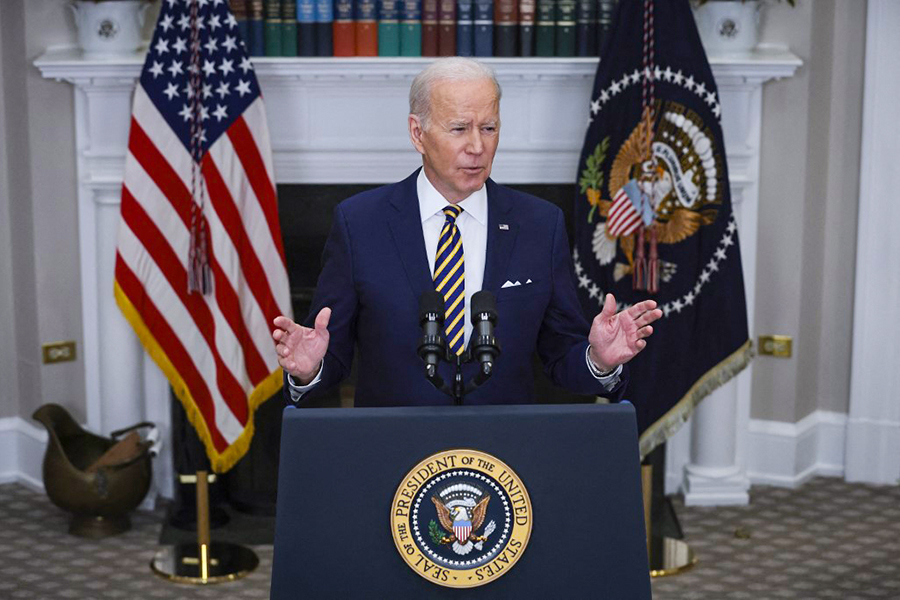 President Joe Biden speaks in the Roosevelt Room of the White House March 8, 2022 in Washington, DC. During his remarks, Biden announced a full ban on imports of Russian oil and energy products as an additional step in holding Russia accountable for its invasion of Ukraine. (Credit: WIN MCNAMEE / GETTY IMAGES NORTH AMERICA / Getty Images via AFP)​

Kyiv, Ukraine: The United States has banned imports of Russian oil, firing one of its biggest economic weapons against Moscow over the war in Ukraine where new humanitarian corridors were set to open Wednesday for civilians trying to escape besieged cities.

Russia said the routes would open in five cities that its forces have been shelling, but Kyiv has repeatedly warned Moscow is not genuinely looking to allow civilians to flee and on Tuesday accused Moscow of bombing one corridor.

“Such actions are nothing other than a genocide,” the Ukrainian defence ministry wrote on Facebook.
President Joe Biden said Tuesday the US oil embargo on Russia would cut “the main artery” of Moscow’s economy, and vowed Ukraine would “never be a victory” for Russian leader Vladimir Putin.
The invasion has sparked the biggest war in Europe and the continent’s largest refugee crisis since World War II, while the West has responded with sanctions on Russia that have reverberated around the global economy.
Ukrainian President Volodymyr Zelensky has complained he needs more air support to fight Moscow’s offensive, with the invading forces maintaining a devastating bombing campaign.

But Washington on Tuesday rejected an offer from NATO ally Poland to give Kyiv jets via an American air base because of fears of a wider conflict with Russia.

The new humanitarian corridors were set to open in the capital Kyiv, port city Mariupol, and Kharkiv, Sumy and Chernihiv, at 0700 GMT, Russian defence ministry official said, according to TASS state news agency.

It did not say if the corridors would lead to Russia or Belarus, a condition that Kyiv had rejected in previous evacuation plans.

Successful evacuations from some of the agreed humanitarian corridors have been reported.

At least 5,000 people were freed in the northern city of Sumy, Ukrainian officials said Wednesday, after days of heavy fighting and an air strike that killed 21 people.

But attempted evacuations from the port town of Mariupol have failed on several occasions, with Kyiv saying Moscow refused to allow children, women or the elderly to leave.

“This situation is really apocalyptic for people, it is getting worse,” said Ewan Watson, spokesperson for the International Committee of the Red Cross (ICRC).

A six-year-old girl identified only as Tanya died from dehydration under the rubble of her destroyed home, said authorities in the southern hub, which has had no water, power or heating since Friday.

‘Fight to the end’

Russian troops are slowly encroaching on Kyiv despite intense efforts by outgunned Ukrainian forces, and moving faster through the east and north of the country.

In the suburb of Irpin, seen as a critical point for the advance on the capital, civilians fled in icy wind and thick snowfall, AFP reporters witnessed.

People waited in a long line to cross over the Irpin river on makeshift walkways of planks and mangled metal, after the Ukrainians blew up the bridge leading into the capital to hamper any Russian advance.

“I didn’t want to leave, but there’s nobody left in the homes around us, no water, no gas and no electricity,” Larissa Prokopets, 43, told AFP.

In a defiant speech to British lawmakers, Zelensky invoked Winston Churchill’s resistance against Nazi Germany as he vowed to “fight to the end.”

“We will fight in the forests, in the fields, on the shores, in the streets,” he told the packed chamber, which gave him a standing ovation.

Western governments have baulked at the idea of a no-fly zone to defend Ukraine’s skies despite his requests.

The Pentagon on Tuesday rejected the Polish plan to deliver Mig-29 fighter jets to a US air base in Germany, saying it was not “tenable”.

“The prospect of fighter jets… departing from a U.S./NATO base in Germany to fly into airspace that is contested with Russia over Ukraine raises serious concerns for the entire NATO alliance,” spokesman John Kirby said in a statement.

Britain said it would join the United States in phasing out Russian oil by year’s end while oil giants BP and Shell announced an immediate halt to Russian oil and gas purchases.

The European Union also said it would slash gas imports by two-thirds.

“It is a hunk of metal at the bottom of the sea, I don’t think it will ever be revived.”

With the growing raft of Western sanctions beginning to bite, ratings agency Fitch downgraded Russia deep into junk territory on Tuesday, predicting a sovereign default to be “imminent.”

The pressure has grown day by day on businesses and sports to sever ties with Moscow and the Premier League announced Tuesday it would suspend its deal with its Russian broadcast partner.

The Chernobyl nuclear power plant is no longer transmitting data to the UN’s atomic watchdog, the agency said Tuesday, as it voiced concern for staff working under Russian guard at the Ukrainian facility for almost two weeks.

Putin is using nuclear “blackmail” to keep the international community from interfering the conflict, the head of the Nobel prize-winning group ICAN told AFP Tuesday.

“This is one of the scariest moments really when it comes to nuclear weapons,” Beatrice Fihn, who leads the International Campaign to Abolish Nuclear Weapons, said.

“It is incredibly worrying and overwhelming.”

Know how many seats are needed in UP, Punjab, Goa, Uttarakhand and Manipur to form the government

Know how many seats are needed in UP, Punjab, Goa, Uttarakhand and Manipur to form the government