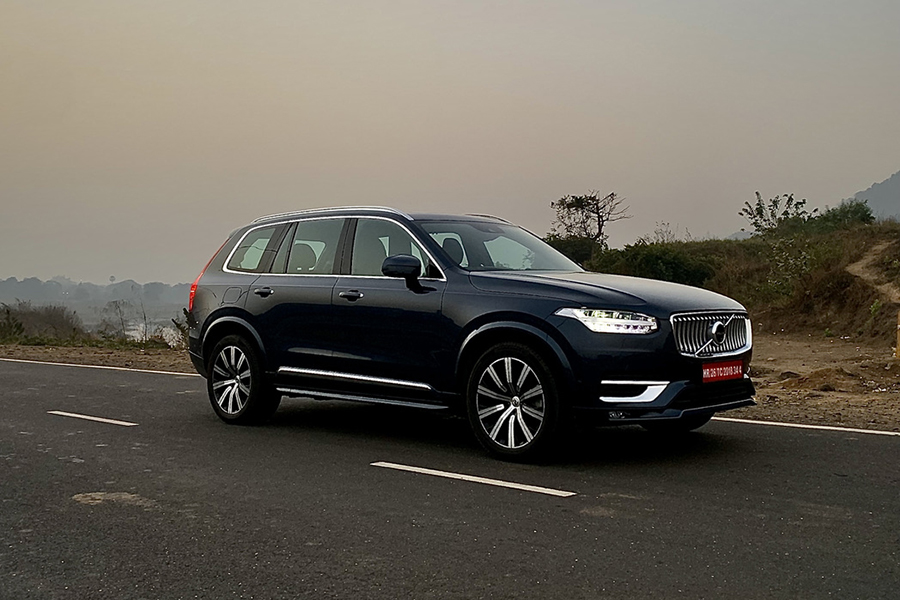 Volvos have always been suitably impressive, but the XC90 in particular is a stand-out full-fat luxury SUV that promises a lot, and delivers on most counts, all in a very typical Volvo way

Cast your eye towards a big, smothering, all-encompassing luxury SUV, and there’s, quite honestly, no dearth of options in the Indian market. Audi, Mercedes, BMW and even Jaguar Land Rover all have at least a couple of options to woo you. There is, however, one that gets overlooked. And it’s a bit of a puzzler, really, as to why it’s not thrust into your list of potential candidates from the get-go. Volvos have always been suitably impressive, but the XC90 in particular is a stand-out full-fat luxury SUV that promises a lot, and delivers on most counts, all in a very typical Volvo way.

And that typical Volvo way is evident from the moment you lay eyes on it for the first time. Near-perfect proportions, like the ones the XC90 sports, is a bit of a rarity these days. It’s the unfortunate truth that supports experimentation and exploring the boundaries of what’s acceptable in terms of design, but car makers will do anything to stand out in this day and age. In comparison, the XC90 is a breath of fresh air. It’s large in every sense of the word, but it rarely makes you feel like it’s comically done. The supporting acts that accentuate the design—the headlamps, tail-lights, grille, and alloy wheels—all point to a harmonious culmination of designers working at their peak. If I were to put it across in a more subtle manner, the XC90 encapsulates the word ‘non-offensive’ to the hilt.

It takes just a swing of one of the four doors to notice that this philosophy extends to the cabin, too. While everything in here is classy, minimalist and built with luxury in mind, there would probably be some who’d think that the XC90’s cabin is a bit underwhelming. For the amount you’re paying, some would expect a show-and-tell of exquisite detailing, rare materials and, possibly, bespoke inclusions as well. But there’s none of that. It’s just not how Volvo envisioned the buyer of an XC90 to be, and it shows. A simple, good-looking dash, a touchscreen mounted vertically, a chunky steering wheel, and an okay-sized digital instrument cluster. It’s all about being understated, after all. I don’t see an issue with this. The XC90 isn’t looking at being in the good books of those who are looking to make a statement. Rather, it’s about serving those who have nothing left to prove. I’d go so far as to say that that’s possibly an even stronger statement to make. 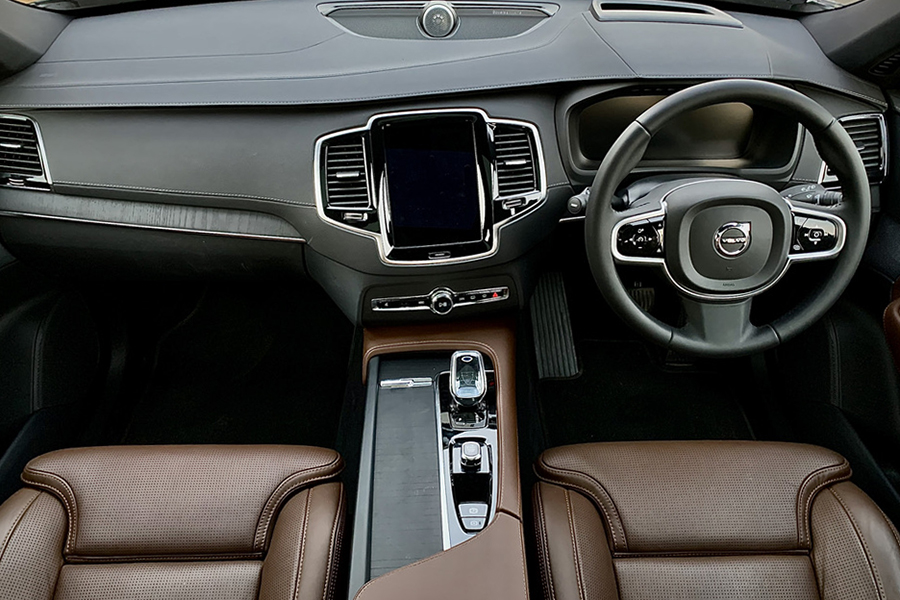 But back to it: The seats are exceptionally comfortable, and the second row makes a mockery of cars claiming to boast exceptional legroom. Boot space? There’s a cavernous amount to exploit with the third row of seats plopped down. Every single aspect of the XC90’s cabin is aimed at one goal: Being as comfortable as humanly possible, and it achieves this goal with remarkable ease. And to support that theory, there’s four-zone climate control, heated, cooled, and massage seats, a head-up-display, adaptive cruise control, emergency braking assist, blind-spot detection, hill-descent control and a 360-degree camera, to name but a few of the features onboard.

And that brings me to what drives the XC90. Ever wondered what it would feel like to waft along to your destination? To be so isolated from the rest of the world that it wouldn’t be out of the question to think of yourself as being in a silo? A moving, noise-cancelling silo that shuts out the irregularities of the world as you focus on a power nap or settle into a bit of meditation? The engineers and designers of the XC90 obviously felt it prudent that they transfer this exact feeling to you, because that’s precisely what you get with the XC90. Now, of course, it’s worthwhile to point out that a fair few manufacturers provide this sort of cocooned environment in their cars, and the XC90 doesn’t quite reinvent the wheel in that regard, but it’s also true that it goes about it in a very dignified manner that’s unique to Volvos. Whereas the general sentiment for other manufacturers’ cars in this segment is one of showboating and screaming from atop roofs about the scale of the achievements you’ve personally had, the XC90 gives you the sense that the silence and opulence is yours and yours alone to enjoy, free from the trappings of having to impress anyone. 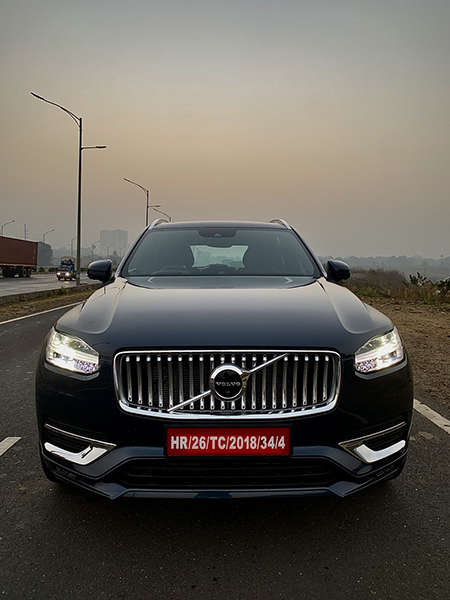 And this shows abundantly with the B6 petrol engine that’s working away under the hood. It’s silent, refined, capable and just powerful enough to make being driven to places in an unhurried manner the most easy experience ever. The ride supports this sentiment, too, and Volvo’s engineers have done a good job of tuning it so that all irregularities, and all imperfections on the road are dealt with nothing more than a muted grunt of disapproval. Very little disturbs the XC90, you see?

Push it hard and it obliges, sure, but you’re constantly reminded of the fact that this isn’t what it was intended to do. With 300 hp and 420 Nm, it’s not meant to scorch the drag strip, and it’s hardly intended to get you to places out of breath. But if you were to attempt pushing the engine hard, you’d barely notice it thanks to some excellent sound damping and a more-than-capable 8-speed auto gearbox that will comply with your demands. Keep in mind, this is an SUV that weighs in excess of 2 tonnes, and that’s immediately impressive. 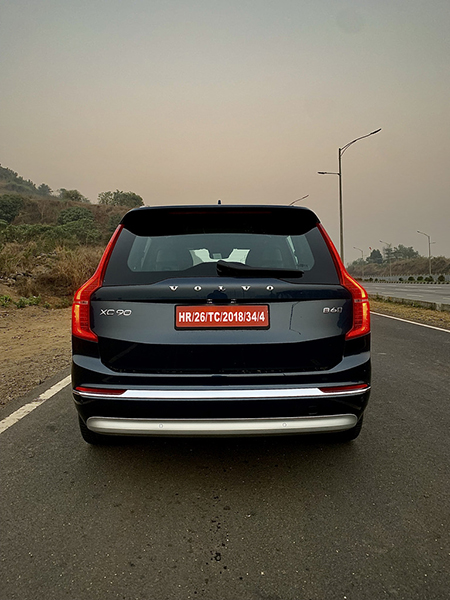 It’s true that its rivals may have a bit more in terms of fancy, modern equipment, and a more in-your-face design to woo you, but it’s also spot on to call this luxury SUV one of the most potent forms of transport around for the more distinguished lot. At Rs 1.09 crore (on-road, Mumbai), the XC90 might not exactly fit the tag of affordable, but for the money, there’s very little out there that can match it.

CBI arrested the superintendent and inspector of CGST, this is the allegation