Forbes India – ‘We Couldn’t Leave Them’: Ukraine Refugees Flee With Pets In Tow 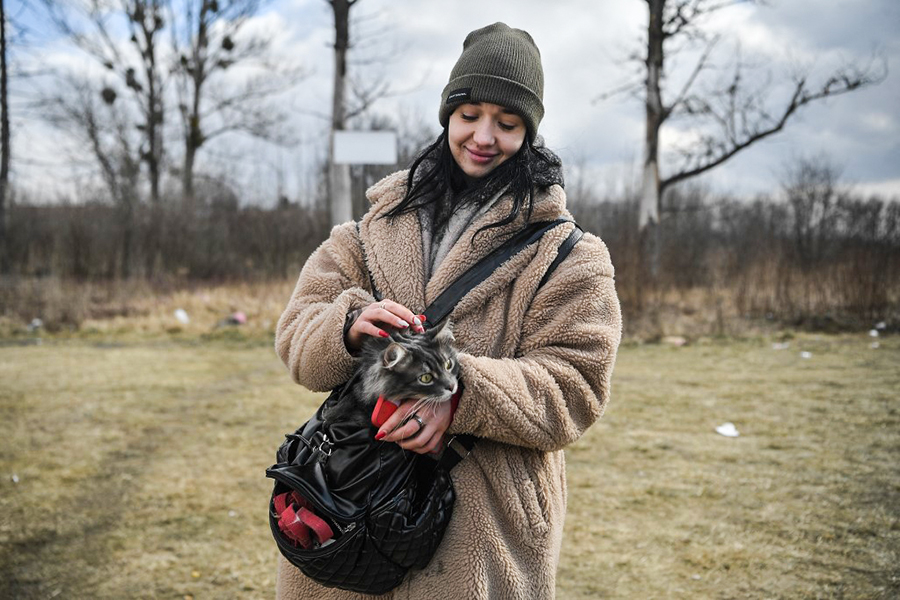 Lera, a young refugee from Ukraine holds her cat at the outside the temporary shelter and relocation center near Przemysl, south-eastern Poland on March 10, 2022. The UN says at least 2.2 million people have fled Ukraine, with more than half now in Poland. It has called the exodus Europe’s fastest-growing refugee crisis since World War II. (Credit: Louisa GOULIAMAKI / AFP)

Przemysl, Poland: Lea and Keks are among the latest refugees arriving in Poland from war-torn Ukraine, both jumping at their master’s feet and visibly relieved after crossing the border.

The two Yorkshire terriers are a part of a large contingent of dogs, cats and parrots fleeing Ukraine following the Russian invasion.

“At home, they live on the pillow, they are small and their body and health are not really fit for this trip,” said their owner, Anna Zatsepa.

“But they’re like children and you just can’t leave them behind,” she told AFP as Keks sniffed around curiously, while Lea cautiously followed him.

“They were scared crazy for sure, because they don’t understand what’s happening and why it is happening to us,” said Zatsepa, one of more than two million refugees who have left Ukraine.

At the Medyka border crossing, Zatsepa said she, Lea and Keks were planning to rest in Poland a bit before pondering their future.

Tatiana Tymchuk, who lives near Kyiv, arrived with her mother and little brother, as well as a turtle named Cherep and a Snowshoe tomcat called Simon.

“We couldn’t leave them behind so we took them with us. We also have dogs, but they stayed at home with grandpa,” she told AFP.

“We lived 10 kilometres (six miles) from Kyiv, they were free in a happy house there,” Tymchuk said.

A grey cat carefully watching the world outside her blue and white cage, Mara came from Kyiv with Liana Getman and her two daughters.

“She was really scared and I guess now she understands all the disasters happening and she supports us as she can,” Getman said.

“She was crying while we were evacuated from Kyiv, she was crying half of our trip, but then she understood that she’s OK, she’s with us and now she’s calm.”

Many women crossing the border from Ukraine to Poland at Medyka carry or lead animals besides their sometimes bulky suitcases, but there are also more efficient ways of taking cats and dogs into safety.

At an animal shelter on the outskirts of the nearby city of Przemysl, Joanna Puchalska-Tracz welcomed 38 dogs and 32 cats from Ukraine on Wednesday, taken from Kyiv by the German organisation White Paw in several cars.

“They are tired and scared and they don’t want to eat yet, they must rest and look around and maybe get better here,” she told AFP over the barking and miaowing of the canine and feline refugees.

Melanie Vogelei from White Paw is evacuating not only animals from Ukrainian shelters, but also the organisation’s Ukrainian volunteers to the west.

“They used the chance to flee and they took all the animals,” Vogelei told AFP at the sprawling shelter.

“We have a little sanctuary in Germany and we’ll bring all our Ukrainian people and all their animals there,” Vogelei said.

The Przemysl shelter will soon increase its capacity, said Puchalska-Tracz, adding that she had also established a 24/7 animal help point next to a large refugee centre in central Przemysl.

“Many owners travel with their dogs and cats and they don’t have anything for them. They are leaving home so fast. So after work here I go to the centre to bring some food to those animals,” she said.

In UP trends, BJP gets majority, SP's figure crosses 100, know how much vote percentage
UP Results: Who gets the credit for BJP's victory in UP? Union Minister Smriti Irani gave
Jyotiraditya Scindia said – Congress does not want to waste time on my past and past
Previous Post

Watch: Woman made Maggi from cotton candy, see this strange recipe in the video

Union Minister's statement on AAP's victory in Punjab, told the reason for the victory against the Congress