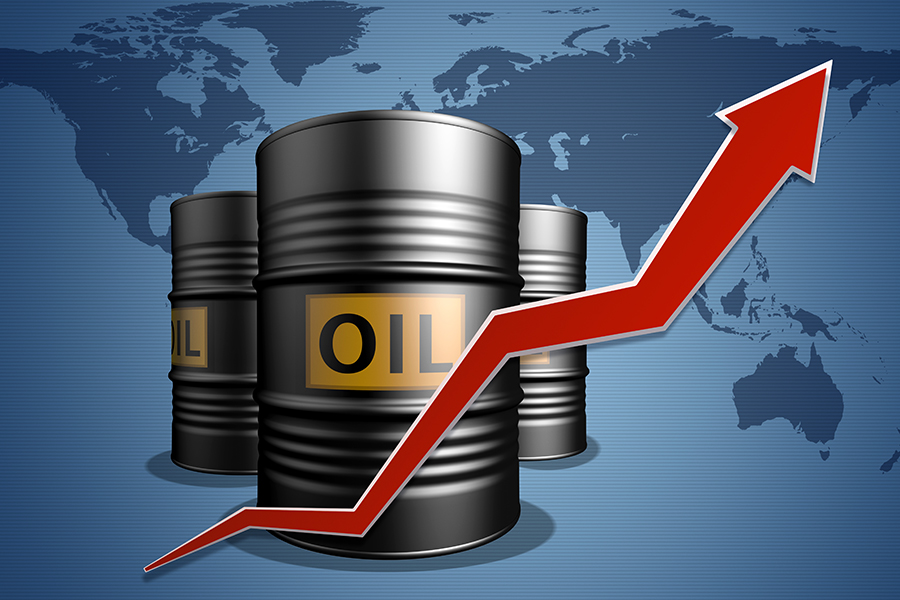 The surge in crude is giving central banks a headache as they start to tighten pandemic-era monetary policy to fight inflation. (Credit: Shutterstock)

Hong Kong, China | Equity markets plunged Monday, while oil prices soared to a near 14-year high and safe-haven gold broke $2,000 as investors grew increasingly fearful about the impact of the Ukraine war on the global economy.

Trading floors were a sea of red in early exchanges with experts warning of a period of stagflation with the spike in crude likely to light a fire under already high inflation.

The commodity at one point rocketed almost 18 percent to $139.13 — a level not seen since mid-2008 — after US Secretary of State Antony Blinken said the White House and allies were in talks about banning imports from Russia.

With the country the third-biggest producer of oil, such a move would compound a supply crisis just as demand takes off. Other commodities sourced from the region such as wheat and metals were also sharply higher.

And Mike Muller of Vitol warned of further pain.

“We have plenty of twists and turns to come,” he told a podcast produced by Dubai-based consultant and publisher Gulf Intelligence.

“While I think the world is already pricing in the fact there’ll be an inability to take in a serious amount of Russian oil in the western hemisphere, I don’t think we’ve priced in everything yet.”
World governments had until now not included Russian oil in their wide-ranging sanctions on Moscow owing to concerns about the impact on prices and consumers, though trade has become increasingly tough as banks pull financing and shipping costs rise.
The surge in crude is giving central banks a headache as they start to tighten pandemic-era monetary policy to fight inflation, which is already at a 40-year high in the United States.
The International Monetary Fund warned at the weekend that the war and sanctions on Russia will have a “severe impact” on the global economy.

National Australia Bank’s Tapas Strickland said: “Global growth fears abound given the surge in commodity prices, with ‘stagflation’ again rearing its head in what must be akin to a horror movie for a central bank.

“A key question for markets is how do central banks respond to higher inflation and the possibility of slower growth ahead.”

Concerns about the impact on the global economy have rattled through markets, with European equities particularly badly hit owing to the continent’s reliance on Russian energy.

On Monday, Asian bourses were deep in the red, with Hong Kong at one point losing more than four percent, while Tokyo and Taipei were off more than three percent.

Seoul and Manila were both down more than two percent, with Shanghai, Sydney and Wellington off more than one percent. There were also steep losses in Singapore and Jakarta. US futures were sharply lower.

The panic on trading floors sent safe havens sharply higher, with gold — a key go-to in times of crisis and turmoil — hitting as much as $2,000.86, its highest since mid-2020.

The dollar was also well up against most other currencies, while Treasuries continued to rally.

UP elections: Rajbhar, who fought elections with SP, said – we will win at least 45-47 seats out of 54

Activate Tubi on Your Device with tubi.tv/activate

A Step-by-Step Guide to Csm Cour

5 Benefits of Working with an SEO Agency in Sydney

Bhagwant Mann will take oath as the Chief Minister…